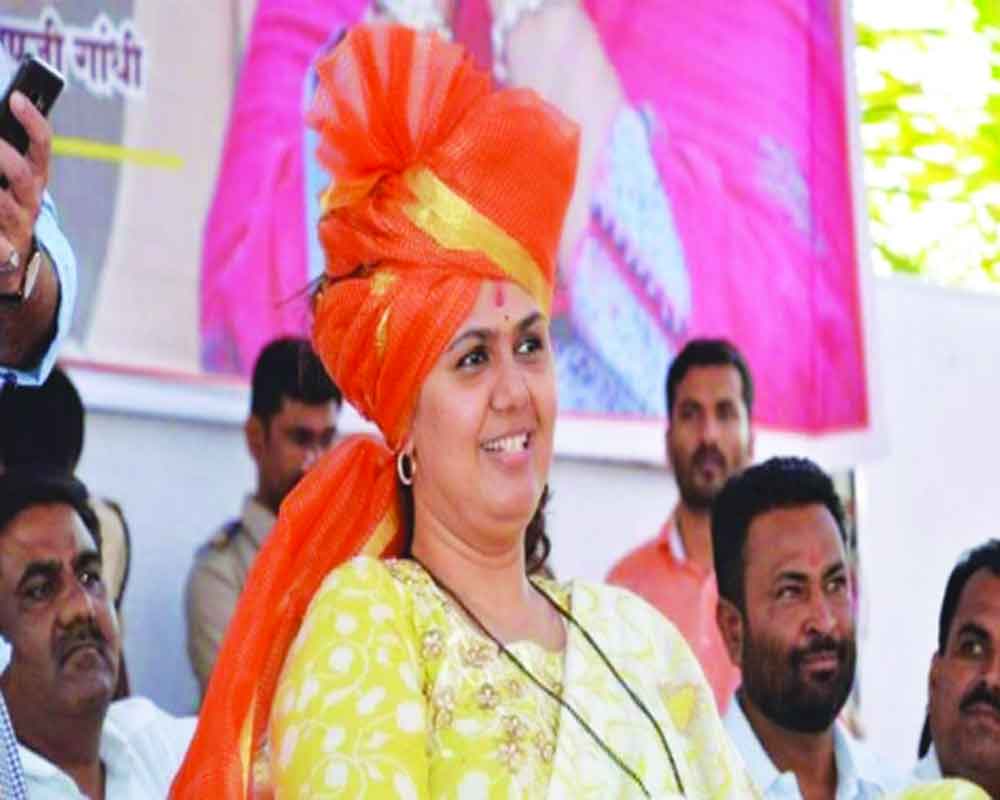 The Maharashtra BJP went into a tizzy on Monday as its former Minister and senior leader Pankaja Munde — through a Facebook post and subsequent removal of the BJP’s name from her twitter handle — hinted at the possibility of her quitting the parent party and joining another party.

Forty-year-old Pankaja is the daughter of late BJP leader Gopinath Munde. A former Minister in the previous BJP-led saffron alliance Government in the State, she was defeated by her cousin Dhananjay Munde in the October 21 State Assembly polls by a margin of 30,701 votes in their home constituency of Parli in Beed district of Marathwada.

Shiv Sena spokesperson Sanjay Raut added fuel to ongoing speculation that Pankaja might join the Shiv Sena. Raut said, “Many prominent BJP leaders have expressed their willingness to join the BJP. If you are talking about Pankaja Munde, you will get know about her plans on December 12.”

Talking to mediapersons, Maharashtra BJP president Chandrakant Patil said, “At a time we have an accidental Government in the State. It is but natural that we get to see the ruling front leaders indulge in this kind of wishful thinking. There is absolutely no truth in the rumours that Pankajatai would quit the BJP. Many of us have spoken to Pankajatai. I don’t think there is any possibility of her taking such a step (of quitting the BJP).”

“To put an end to this kind of rumours, as the State BJP president I am issuing an official statement that Pankajatai will not quit the BJP,” Patil said.

Another senior State BJP leader Vinod Tawade said, “I have spoken to Pankajatai myself. Being a member of the Mahajan-Munde family, she is close to Thackeray family. But that does not mean that Pankaja will leave the BJP and join the Shiv Sena. The BJP has confidence in her loyalty to the party. All she has done through her Facebook post is to invite all her supporters for a meeting called on December 12. Hence there is no need to draw wrong inferences from her FB post”.

Notwithstanding the assertions to the contrary made by Tawade and other BJP leaders, there is lot to read in between the lines in the Pankaja’s Facebook post.

In a crucial sentence in her Facebook post, Pankaja invited her supporters for a meeting called on December 12 on the birth anniversary of her late father Gopinath Munde and wrote, “Considering the changes in political situation in the State and also the responsibility before me, we need to decide our future course of action.”

In the initial paragraph of her post, Pankaja wrote: “You have all been witnessing the political events - be it core committee meetings or party meetings -- in the State ever since the Assembly poll results were announced. Minutes after the results, I went in front of the media and accepted the full responsibility for my defeat”.

“I attended the BJP’s core meetings. I have always believed that the country comes first, next the party and lastly me. There’s nothing greater than my duty towards people. That’s why on the third day after my father’s death, I had got back to my work. During the five years in power, I worked for the people through you. After I was defeated in the polls, I have got so many message from people wanting to meet me,” Pankaja said.

“You are asking me time for meeting you. I will give you all time after eight to 10 days . During the eight to 10 days, let me introspect. I want to decide on what should I do next? Which way should I go?. What can I give to people? What’s my strength? What do people expect from me? After deliberating on all these questions, I will come before you on December 12,” Pankaja told her supporters through her Facebook post.

In another reference that she is moving away from the BJP, Pankaja on Monday removed the party’s name from her twitter handle @Pankajamunde...

Interestingly enough, the last three tweets that Pankaja had put was on November 28 the day Shiv Sena president Uddhav Thackeray was sworn in as the Chief Minister of the Shiv Sena-NCP-Congress front “Maha Vikas Aghadi”, related to the Government formation in the State. She congratulated Uddhav on his taking over as the Chief Minister of Maharashtra and hoped that he would fulfil the dream of late Balasaheb and expectations of the Marathi people.”

With her Facebook post and move to remove the BJP from her twitter handle, Pankaja, who took over the legacy of her father Gopinath Munde after the latter died in a road accident in the national Capital on June 3, 2014, has created a major stir in the State political circles. It remains to be seen if she will indeed quit the party on December 12 or will she reconcile to the situation and continue to remain in the BJP.