Sheila back to steer Delhi Cong in LS polls

Sheila back to steer Delhi Cong in LS polls 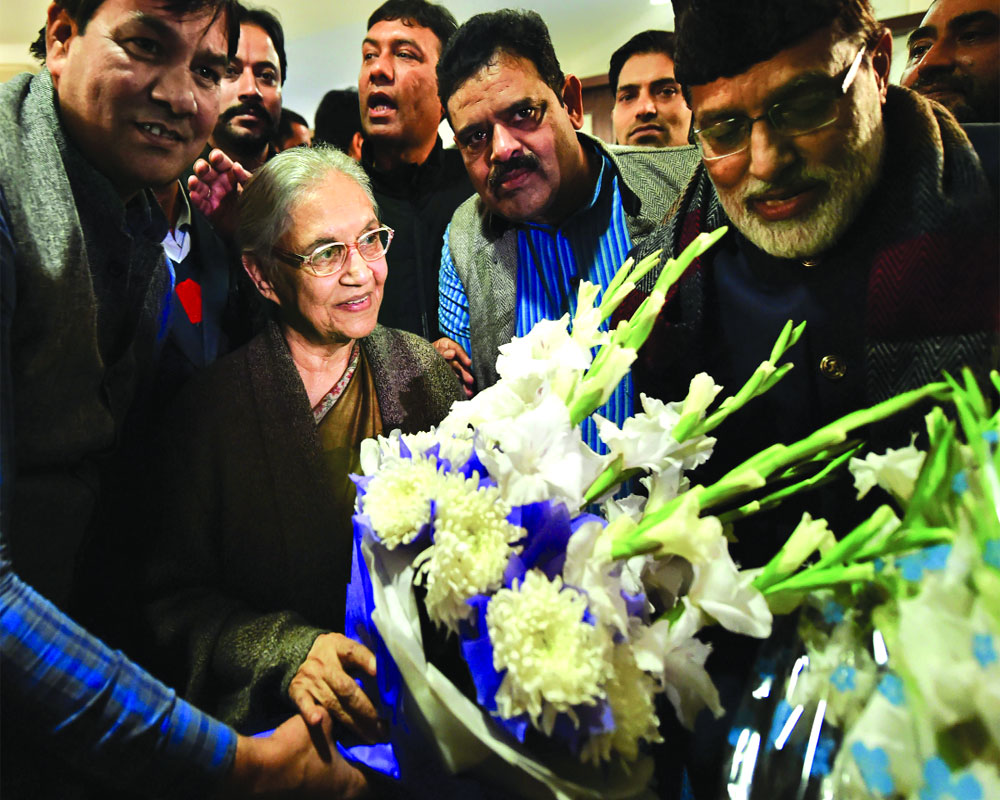 As Delhi unit chief, Dikshit to be assisted by 3 working presidents of State Congress

In a political development in the national Capital ahead of the Lok Sabha polls this year, former Delhi Chief Minister Sheila Dikshit was on Thursday appointed as the chief of the Delhi Congress.

Her name was cleared by none other than party chief Rahul Gandhi following a brainstorming meeting of State Congress leaders on Thursday.

Dikshit is an old war horse and a favourite among the party workers for her experience of being three-time Chief Minister of Delhi. In view of her age and health concerns, the Congress has appointed three working presidents to assist her.

Dikshit, 80, makes a comeback into Delhi politics ahead of the Lok Sabha elections. The longest serving Chief Minister of Delhi — from 1998 to 2013 — Dikshit stayed away from active politics following the Congress’ defeat in Assembly elections. Dikshit had represented Gole Market constituency of New Delhi thrice and was one of the most successful Chief Ministers who is credited for adorning the landscape of Delhi.

Interestingly, she replaces Ajay Maken, who is known as her protégé-turned-bête noire. Maken had been appointed president of the Delhi Congress following the party’s defeat in the Assembly elections in 2014, when Dikshit was vanquished by Aam Aadmi Party convener Arvind Kejriwal.

The three working presidents who will assist Dikshit are: Devendra Yadav, a two-time MLA and AICC secretary, Rajesh Lilothia, also a two-time MLA, AICC secretary and known Dalit leader, and Haroon Yusuf, who was a Minister in the  Dikshit Government.

Maken had earlier conveyed to the party leadership, his inability to continue as the DPCC chief in view of the serious health issues he is facing. He is suffering from a spinal ailment, said sources close to the Delhi leader.

Despite being perceived as having worked hard to revive the party in Delhi, Maken met with little success electorally. The party failed to win any of the three municipalities in Delhi, and could not register a victory in the by-elections. According to sources, he was unhappy with a section of party leaders who want to forge an alliance with the AAP in Delhi.

With just months to go for the general elections, this is Dikshit’s third major assignment from the party after ruling Delhi for 15 consecutive years. She served as Kerala Governor and then Congress had named her the chief ministerial candidate during the Uttar Pradesh Assembly polls.

During her three terms, she became the face of development of Delhi but the rise of Kejriwal due to corruption against the Congress led to her downfall after 15 years in the saddle.

After her loss she was appointed Governor of Kerala in 2013 but she resigned after Narendra Modi came to power in 2014. She was briefly given charge of Uttar Pradesh but quit for health reasons.

AICC sources said Sheilat’s political acumen is more than the current run of part leadership  in Delhi politics and her induction at the helm of Delhi Congress is seen as a signal of the party’s seriousness about its prospective alliance with AAP to defeat the BJP which is holding all the seven Lok Sabha seats in Delhi.

Kejriwal -- who was at loggerheads with the Congress after their partnership ended with his 49-day tenure as Chief Minister in 2013 -- has been co-opted into the proposed Grand Alliance against the BJP. Andhra Pradesh chief N Chandrababu Naidu who quit NDA and joined the Opposition bandwagon has along with DMK chief MK Stalin have persuaded Kejriwal to drop the “negative stance” against the Congress to take on Modi juggernaut.

Dikshit’s comment on the prospective partnership had marked a fresh stance that took the big picture into account and helped catapult her to the pole position in the race for the party’s top job in Delhi. Asked about the alliance, Dikshit in an interview last had said the “high command, Rahul and all will decide and whatever they decide will be acceptable to all of us”.

A change of guard was also announced for Himachal Pradesh with senior party leader Kuldeep Singh Rathore’s name cleared by Rahul to hand him the batons of Himalayan State by replacing Sukhwinder Singh Sukhu.

Congress chief also cleared Rathore’s appointment after deliberations with State unit leaders. Rathore is a member of the All India Congress Committee (AICC) and former general secretary and chief spokesman of the Himachal Pradesh Congress Committee.  The removal of Sukhu came ahead of the parliamentary election as the faction led by former Chief Minister Virbhadra Singh was at loggerheads with him and wanted his removal.