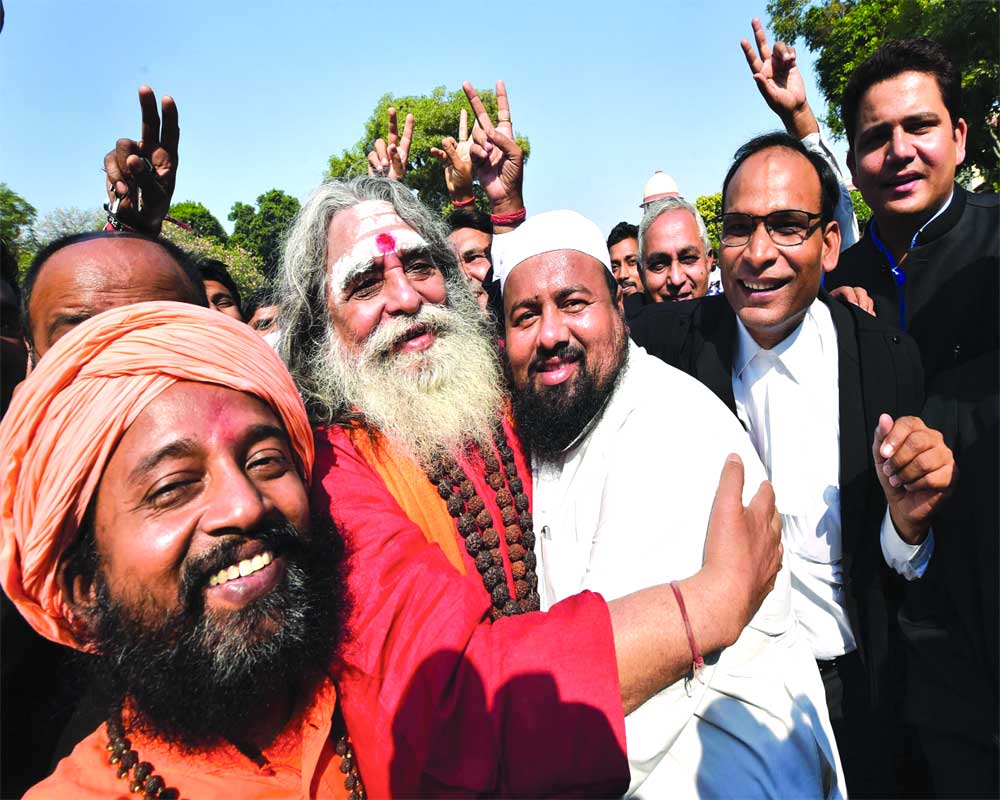 While delivering the verdict in the Ram Janmabhoomi-Babri Masjid land title case, the Supreme Court held that the faith and belief of Hindus that the land in Ayodhya, where the Babri Masjid once stood, is the birthplace  of Lord Ram can’t be termed ‘groundless’. ‘Shlokas' from scriptures and sacred religious books, including ‘Valmiki Ramayana' and ‘Skanda Purana', which are of much earlier period than 1528 when the Babri Masjid is supposed to have been constructed, were referred to by witnesses and placed as evidence before the Supreme Court by the Hindu parties to canvas their arguments that the site was indeed the birthplace of deity Lord Ram, a five-judge Constitution bench headed by Chief Justice Ranjan Gogoi said. The following excerpts all come from the 1045-page judgment.

The ASI report suggested that the C14 determination of charcoal samples from the early levels (periods I to III) provide dates commencing from the last centuries of second millennium BC...

Justice Agarwal (High Court) noted that the existence of a circular shrine with its attendant architectural features likely indicated the presence of a Shaivite shrine and that it was not a Muslim tomb. He observed that while on the one hand, the dimensions of the structure were too small for a tomb, a gargoyle would never find presence in a tomb but was an integral feature of the sanctum of a Shiva temple to drain out water poured on the Shivalingam...

On 15 August 1947, India as a nation realised the vision of self-determination. On 26 January 1950, we gave ourselves the Constitution of India, as an unwavering commitment to the values which define our society. At the heart of the Constitution is a commitment to equality upheld and enforced by the rule of law. Under our Constitution, citizens of all faiths, beliefs and creeds seeking divine provenance are both subject to the law and equal before the law. Every judge of this  court is not merely tasked with but sworn to uphold the Constitution and its values. The Constitution does not make a distinction between the faith and belief of one religion and another. All forms of belief, worship and prayer are equal. Those whose duty it is to interpret the Constitution, enforce it and engage with it can ignore this only to the peril of our society and nation. The Constitution speaks to the judges who interpret it, to those who govern who must enforce it, but above all, to the citizens who engage with it as an inseparable feature of their lives.

We accordingly order and direct as follows:

1 (i) Suit 3 instituted by Nirmohi Akhara is held to be barred by limitation and shall accordingly stand dismissed;

(ii) Suit 4 instituted by the Sunni Central Waqf Board and other plaintiffs is held to be within limitation. The judgment of the High Court holding Suit 4 to be barred by limitation is reversed; and

(iii) Suit 5 is held to be within limitation.

2) Suit 5 is held to be maintainable at the behest of the first plaintiff who is represented by the third plaintiff. There shall be a decree in terms of prayerclauses (A) and (B) of the suit, subject to the following directions:

(i) The Central Government shall, within a period of three months from the date of this judgment, formulate a scheme pursuant to the powers vested in it under Sections 6 and 7 of the Acquisition of Certain Area at Ayodhya Act 1993. The scheme shall envisage the setting up of a trust with a Board of Trustees or any other appropriate body under Section 6. The scheme to be framed by the Central Government shall make necessary provisions in regard to the functioning of the trust or body including on matters relating to the management of the trust, the powers of the trustees including the construction of a temple and all necessary, incidental and supplemental matters;

(ii) Possession of the inner and outer courtyards shall be handed over to the Board of Trustees of the Trust or to the body so constituted. The Central Government will be at liberty to make suitable provisions in respect of the rest of the acquired land by handing it over to the Trust or body for management and development in terms of the scheme framed in accordance with the above directions; and

(iii) Possession of the disputed property shall continue to vest in the statutory receiver under the Central Government, until in exercise of its jurisdiction under Section 6 of the Ayodhya Act of 1993, a notification is issued vesting the property in the trust or other body.

3) (i) Simultaneously, with the handing over of the disputed property to the Trust or body under clause 2 above, a suitable plot of land admeasuring 5 acres  shall be handed over to the Sunni Central Waqf Board, the plaintiff in Suit 4.

(ii) The land shall be allotted either by:

(a) The Central Government out of the land acquired under the Ayodhya Act 1993; or

(b) The State Government at a suitable prominent place in Ayodhya;

The Central Government and the State Government shall act in consultation with each other to effectuate the above allotment in the period stipulated.

(iii) The Sunni Central Waqf Board would be at liberty, on the allotment of the land to take all necessary steps for the construction of a mosque on the land so allotted together with other associated facilities;

(iv) Suit 4 shall stand decreed to this extent in terms of the above directions; and

(v) The directions for the allotment of land to the Sunni Central Waqf Board in Suit 4 are issued in pursuance of the powers vested in this Court under Article 142 of the Constitution.

4) In exercise of the powers vested in this Court under Article 142 of the Constitution, we direct that in the scheme to be framed by the Central Government, appropriate representation may be given in the Trust or body, to the Nirmohi Akhara in such manner as the Central Government deems fit.

5) The right of the plaintiff in Suit 1 to worship at the disputed property is affirmed subject to any restrictions imposed by the relevant authorities with respect to the maintenance of peace and order and the performance of orderly worship.

All the appeals shall stand disposed of in the above terms. Parties are left to bear their own costs.”