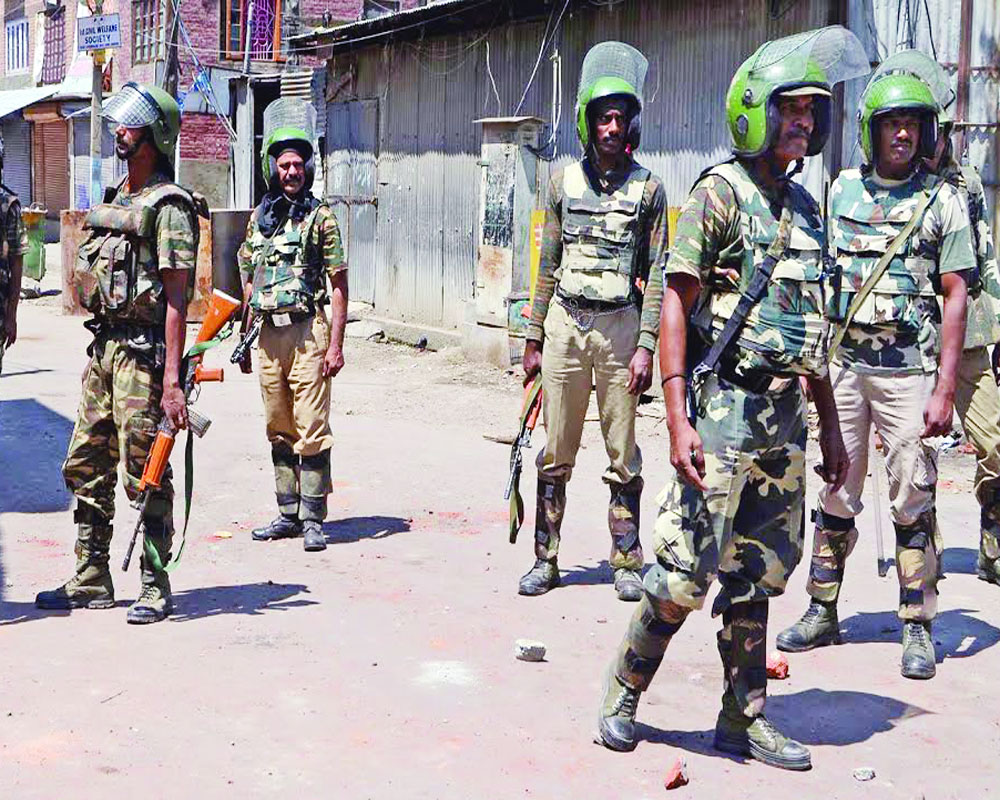 Improper maintenance of India’s internal security has many offshoots, which can be potentially threatening and devastating for an aspiring country like ours, writes Srinath Rangarajan

The attack in Pulwama on 40 Central Reserve Police Force (CRPF) personnel had sparked a massive outrage in the country not long ago. The counter attacks by the Indian Air Force (IAF) on terror infrastructure in Pakistan and the subsequent escalation of tensions between India and Pakistan had become hotly debated topics in public circles. In this context, it is pertinent to analyse the role of the CRPF in maintaining internal security and the factors that challenge it continuously.

The CRPF was originally founded as the Crown Representative’s Police Force on July 27, 1939, and underwent several changes in the following decades to transform itself as the largest Para-Military Force (PMF) in the world. When it comes to matters of internal security, the CRPF is the chief and primary force which leads from the front. The CRPF is undoubtedly the most popular PMF amongst all Central Armed Police Forces (CAPF) and other Central Police Organisations.

There is no parallel to the CRPF in our country. They work along the entire length and breadth of our nation in tandem with various State police forces. Since the laws and rules governing police forces vary from State to State, the CRPF displays amazing levels of flexibility and adaptability in working. The kind of operations they undertake are also varied — ranging from helping the local police, to restoring law and order due to any form of violent extremism. More often than not, all such duties are assigned at the eleventh hour with hardly any time for preparation.

The CRPF have accomplished a lot in performing successful counter insurgency operations in Jammu & Kashmir and the North-East, Anti-Naxal operations in Left Wing Extremist (LWE) areas and other miscellaneous and developmental works. In 2009, the CRPF, with the support of funds from the Government of India (GoI), undertook a mission of identifying Naxals and fence-sitters in a LWE area with the help of local NGOs. They provided skill development programmes and employed hundreds of men and women as carpenters, security guards, receptionists etc in order to accomplish their mission effectively and successfully. This experiment was continued for a few years, which had a positive impact in containing Naxalism.

Considering the multifarious nature of jobs that the CRPF needs to perform, it is needless to say that there are a number of challenges that are encountered. Many of them need to be addressed at the earliest, considering the sensitive nature of internal security in our country.

The issue of synergy with the police forces has been taking a toll on the CRPF. The main point in this dilemma remains if the CRPF should have a “force orientation” akin to that of a military or a “service orientation” similar to that of IPS cadres. It is interesting to dissect this because a recent Parliamentary Standing Committee report on Home Affairs on CAPF observed that the nature of duty of CAPF is more similar to that of Armed forces rather than police personnel. However, the same is being contested by the Ministry of Home Affairs (MHA) and several retired IPS officers that the presence of IPS officers increases inter-departmental coordination. They further add that transforming it into a complete force by itself would leave it devoid of a human face. Nevertheless, the recommendation of the standing committee needs to be considered seriously in certain sensitive and extremism-prone areas of the country. The fact that the security situation in such areas is changing in a dynamic manner adds credence to it.

The top leadership of the CRPF also remains with the IPS and there have also been various views on this issue. While some experts opine that the CRPF should be led by a defence person rather than a civilian IPS officer due to the changing dynamics of internal security in the country, others believe that the CRPF — being responsible for the maintenance of internal security — needs a person at the top, who is more accustomed to dealing with Indian laws and Acts, like the Code of Criminal Procedure. This logic makes an IPS officer an automatic selection to lead from the front.

While this logic remains valid, we need to put this one-size-fits-all approach behind. Internal security in certain States, which share an international border with other countries — like Jammu & Kashmir and the North-East — have a cross-border impact and dealing with such extremist groups in such States may require a completely different approach. This is where the structure and functioning of the CRPF needs to be modified on a region by region basis.

The poor living conditions prevalent in the camps, especially in the LWE areas, is an issue which has been mentioned in several committees and commissions of inquiry done on the functioning of the CRPF. They suffer from lack of access to basic necessities, like food and toilets. Unhygienic environment has been affecting their health. At times, we need to wonder if they are more affected by diseases than by counter-insurgency operations.

In spite of having hundreds of battalions and lakhs of personnel, the CRPF is yet to have its own research wing. There are a lot of issues which are peculiarly specific to the CRPF which have to be dealt with and the lack of an exclusive R&D wing is crippling them. A comprehensive research wing, which can help in exclusive intelligence gathering and sharing, will go a long way in the effective functioning of the force.  Apart from all these, issues of political interventions in transfers and postings, gross mismanagement of funds, and disciplinary issues are a few amongst the others that are making the functioning of the CRPF ineffective.

We cannot aspire to be a great power if we cannot manage our internal security. Today’s problems in J&K could have been mitigated to a large extent if we could manage the internal situation there. Unfortunately, breakdown of law and order on a periodical basis provides a breeding ground for recruiting youngsters into extremist organisations. This is what non-state actors in Pakistan have been doing since decades. After all, the man who blew the suicide bomber in Pulwama was an Indian. Improper maintenance of internal security has got many offshoots which can be potentially threatening and devastating for an aspiring country like India and, in this regard, we need to look at modifying the structure and functioning of the CRPF.