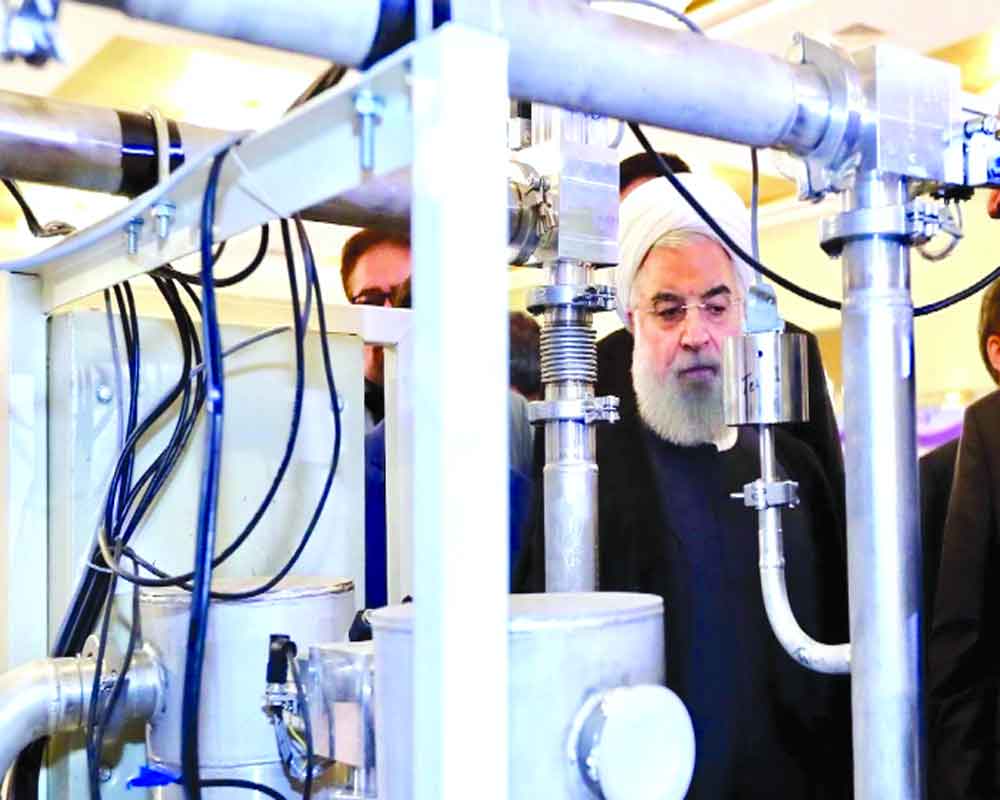 Tehran has made it pretty clear that if the Americans want the way of diplomacy, then sanctions have to be lifted over Iran, and Javad Zarif has contended that the US sanctions pinpoint towards a grandiloquent ‘failure’ of multilateralism and the larger tenet of the praxis of diplomacy

Nuclear power makes or mars humanity, but they are a kosher instrument of both wartime and peace-time deterrence. Still, the nuke related kill potential and aggressive Joe behaviour is here to stay! Iran intends to utilise its nuke kill potential with an objective to mitigate the Occident, particularly the United States, at the Strait of Hormuz.

An instance has been the catching of the British oil tanker, Impera. The downing of each other’s drones and the ugly transactional quid pro quo has become part of the tertiary diplomacy, along with the primal sphere of nuclear diplomacy. The moment of sending packing away the Joint Comprehensive Plan of Action (JCPOA) by US President Donald Trump has been analysed by a section of international relations observers and experts as being indicative of moving out of the disarmament and the non-proliferation regime in the larger construct in West Asia, without ruling out nations of the order of Saudi Arabia and Israel.

Though the US has moved out of the JCPOA, the other nations remain part of the multilateral treaty and the JCPOA remains in force despite the tertiary deliberations on the entire Iranian narrative. Dan Smith writes in Inter Press Service, “This makes it clear that, rather than an evidence-based technical objection to the agreement or its implementation, the US decision to withdraw from the JCPOA was a political measure aimed against Iran. The time-limited nature of the JCPOA is by no means unique — the major US-Russian strategic arms control agreement, for example, expires in 2021. It is normal in such cases to find an appropriate opportunity to discuss extending the agreement.”

In a manner, the global security architecture remains undone as the US has sashayed out of the entire JCPOA and raises questions and pertinent posers concerning the nom de plume of multilateral diplomacy but still such hiccups are part of international negotiations, but definitely it’s here that multilateralism takes a grave beating. International institutions such as the United Nations Security Council promulgated the UNSC resolution in order to sustain and sublimate the idiom of nuclear disarmament, but the infringement of the multilateral treaty makes the institutional understanding, largely peripheral and questionable.

The political story arrives in the text with President Ronald Reagan terming the Iranian nation as the “indomitable satan”, which had to be collectively resisted at any cost after the Iran hostage crisis as before the American Embassy was run down by the local protesters, the United States was an able supporter of the Shah of Iran. It was the Iran hostage crisis which initiated the “vile context” of the relationship between Washington and Tehran which was further buttressed by the American support to dictator Saddam Hussein in Iraq in the near neighborhood of Iran.

Tehran has made it pretty clear that if the Americans want the way of diplomacy, then sanctions have to be lifted over Iran, and Javad Zarif has contended that the US sanctions pinpoint towards a grandiloquent “failure” of multilateralism and the larger tenet of the praxis of diplomacy.

Still, it needs to be reiterated that the “political” complex will always catch on with the leaders, heads of states and their respective populations once the dice of international politics has been rolled in the dark and light coloured strategic squares.

Bloomberg reports about the Iran’s nuclear programme. It contends, “Iran’s nuclear capabilities have been the subject of global hand-wringing for more than two decades. While Iran’s leaders long insisted the country was not building nuclear weapons, its enrichment of uranium and history of deception created deep mistrust.” It’s not exactly a quest for security but it’s a historical security dilemma which the region suffers from. The US and Tehran have been talking for long years and Iran and the great powers at the high table intended to settle the dispute between the West and the rest by entering into a much expected nuclear deal with a civilisationally high brow Iran.

It can be safely surmised that Iran has been foretold and warned that to prevent its economy from getting strangulated, it needs to cap its nuclear programme. But, once the die has been cast by President Trump moving out from the JCPOA, the call becomes one associated with the tenets and the calling of real politique with Israel’s Primer Benjamin drawing the “thin red line” for Iran’s nuclear heft and experiments at one of the United Nations General Assembly session a few years back which kicked off a kind of cold war between Tel Aviv and Tehran then.

Iran has breached the 300 KG limit set up by the Iran US Nuclear Deal in 2015. Iran has always maintained that it be allowed to carry on the uranium enrichment process before the idiom of concessions can be referred to. It was Mahmoud Ahmadinejad who was on the verge of declaring a battle with Tel Aviv at the slightest hint of a provocation. But, with the ushering in of Hassan Rouhani, the developments and the exchanges began to call off tense vibes, between Tehran and Washington and went beyond the “satanic discourse” between both the nations.

Iran was also quick to challenge the European nations in May 2019 and went ahead with its uranium enrichment. Iran apparently draws its lessons from national pride and nations in the region such as Saudi Arabia, and Israel have contended that the empowering of Tehran, which is primarily theocratic, is despicable which engages Tehran with Saudi Arabia in a perennial tiff to lead the larger and the global Islamic world. The yes sayers contend that nations such as Brazil, South Africa and Japan have been made to be open to charges of enriching uranium and utilising the fuel for a strategic weaponisation programme.

The history of confrontation leads us to the staid but still stolid saga of wars premised upon civilisation differences. The manner in which the Persian King Xerxes somehow managed to crush the hundred Spartans reflects the perennially recorded and often commented upon historical schism between the Iran and the West, especially the emblematic Greek city states.

Who can but forget the swift destruction of Persian quick moving vessels pitted against the Greek motley crew! Thus, historicity too leaves intact the much deliberated upon BOT, balance of terror, between nations such as the United States and the Persian Empire of the yonder years.

Coming back to the contemporary context of the JCPOA, and the Iran’s habit of doing nuclear activities from eighties onwards till 2003, it has been alleged that Iran too was in more ways than one involved in the violations of the Nuclear Proliferation Treaty of 1968.  Iran’s import of U-6 from the Chinese was never reported to the International Atomic Energy Agency in the post 2003 phase. The Kalaye centrifuge facilities were also unreported by Tehran to IAEA. The laser isotope separation activities carried on by Iran were also relegated to the dark side of the moon with the IAEA being kept ignorant about them. Iran does not permit IAEA snoops to sites . Thus, in a way before the abacus of the international community, the erstwhile Persian Empire has been unrelenting and seamlessly confrontationist akin to its adversary, the United States of America.