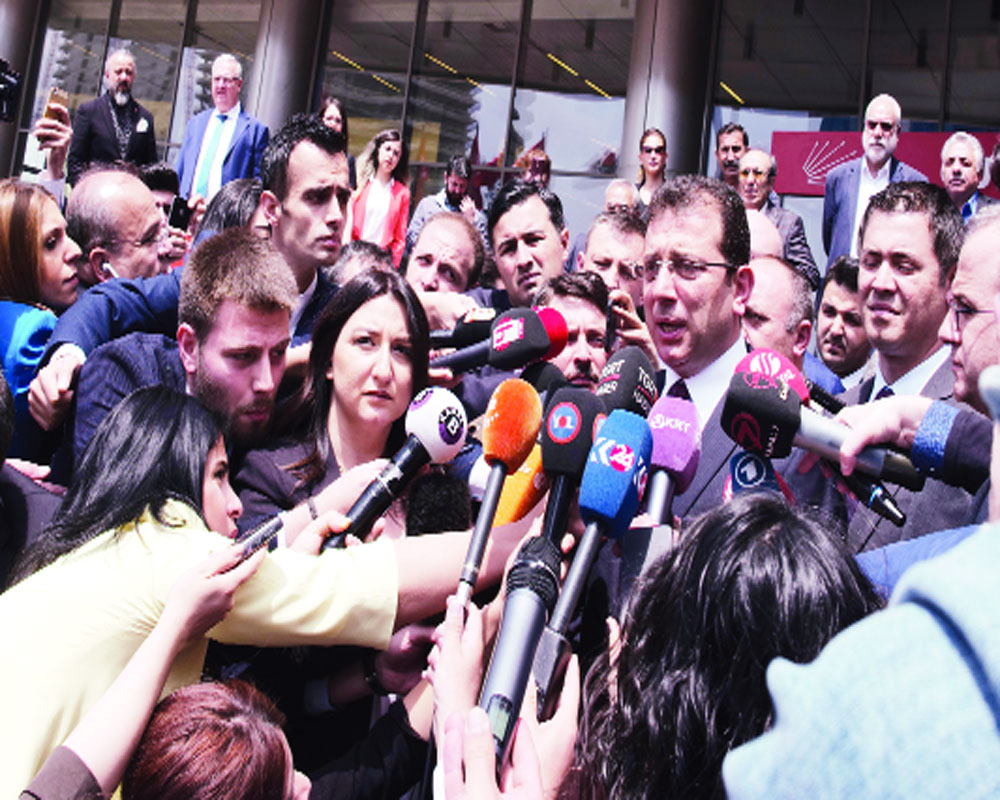 If the first Islamist military coup of July 15-16, 2016, in Turkey made Recep Tayyip Erdogan the Supreme Leader (the Reis), parallel to Mustafa Kemal Ataturk, of Turkey, and ushered into 'one man rule', the second Islamist coup of May 7, 2019, which resulted in the annulment of elected Opposition candidate Ekrem ?mamo?lu as mayor of Istanbul held in March 2019 by the Supreme Election Board (YSK) after having held the mayoral office for three weeks, was staged to secure the future survival of President Erdogan. Nothing is more bizzare, illogical and crass partisan-political than the ground of cancellation by YSK and its rejection of Opposition's complaint. The YSK cancelled the said election on the ground of presence of a few non-public officials as presiding officers and in the polling stations. However it rejected the Opposition's petition to enlarge the scope of its decision to invalidate the entire March 31, 2019 local elections in Istanbul and other districts of Turkey's biggest metropolis, the 2017 constitutional referendum and the 2018 presidential and parliamentary elections on the same ground, stating that YSK's decision is final and is not subject to review or modified as per law!!!

While 'principle of regime security' is the bane of Middle Eastern politics and Turkey is not immune from political culture that denies or obstructs the duly elected government to govern. But never in history of modern Turkey an electoral mandate was cancelled. The cancellation symbolises the classic case of electoral authoritarianism: "If the people does not elect you; then change the people''. The cancellation of election has evoked strong criticism from international quarters.

But the moot question here is: What makes Istanbul so crucial that Erdogan does not want to lose it at any cost? This is despite the fact that he has already lost this election symbolically- both politically and morally - even if his party, AKP and candidate wins in the re-run election, scheduled for June 23, 2019. There are three compelling reasons for such, blatant undemocratic and unprecedented decision.

Firstly, Erdogan, a 'Kasimpasa boy'- one of the poor districts (comprising mostly of migrant families from Anatolian rural hinterland) of Istanbul - from where he started his political career. He became Mayor of Istanbul in 1994, which he held till 2003 before becoming Prime Minister and President of Turkey and never lost to any other political party except in March 2019 election. As Erdogan reached to the height of power and came to personify Turkish state, government, party and nation, the loss of Istanbul mayorship to an ordinary CHP candidate appeared to be a personal loss and a serious jolt to his charisma and politics. In Ekrem ?mamo?lu - a 'black' practicing Muslim Turk with Anatolian background-Erdogan saw a political rival emerging on national level. In Turkish Muslim's popular imagination, a road to national leadership, Prime Minister and President goes through mayorship of Istanbul. If Ankara symbolises 'Secular Turkey', Istanbul represents 'Muslim Turkey with memory of Caliphate and Ottoman Empire' - from where Erdogan derives his politics and authority. This explains why Erdogan could accept the electoral loses for mayorship in Ankara, Izmir, Antalya and other big cities but not Istanbul. He therefore must avenge this loss; remove this emerging threat either by hook or crook.

Second , if Ankara is the political capital of Turkey, Istanbul is the cultural and commercial capital of Turkey-whose revenue is crucial for the Erdogan regime to maintain his 'politics of clientelism'- thereby providing social security to the members of his political constituencies. Further, the crony capitalism of Turkey with its inbuilt corruption- build and sustained by the Erdogan regime- thrives mostly on 'tender' and 'contract' related to 'developmental work' in Istanbul.

Third, and most important, a non- AKP occupant of Istanbul mayorship would be suicidal for Erdogan's transition to possible coronation of himself in 2024 as Caliph as well as preparing ground for family succession. Hence Erdogan's choice of Binali Yildrim for Istanbul mayorship- a trusted and pliable figure-who facilitated everything during his Premiership that Erdogan wanted: A Presidential system with constitutional amendment, which gave Erdogan the kind of executive, judiciary and legislative authority the country has hardly witnessed in modern times. Therefore Erdogan would go any extent possible to win Istanbul mayorship with Yildrim as candidate- as his winning is centrally connected with Erdogan's future politics of Caliphate and ensuring smooth transition to family succession.

It is therefore no accident that the cancellation of Istanbul mayorship was immediately followed by a few important developments in Turkish politics. First, Abdullah Ocalan- the PKK supremo, who is behind bar since 2000, was given access to his lawyer for first time during last 8 years. Second, Erdogan inaugurated the largest mosque in Istanbul in the history of Turkey including the period of Ottoman period. Third, HAMAS, possibly with backing of Turkey, fired a few rockets against Israel. President Erdogan swiftly condemned the Israeli's retaliation. Fourth, the government announced that the 'surprised military intervention' inside Syria to take place soon. All such measures are aimed to win over section of Kurdish and Turkish Muslim voters for June 23 re-run Istanbul mayor election.

In most likelihood, Erdogan is going to succeed. He has to prove by winning the Istanbul mayorship in June 23 re-run election that the previous defeat was due to conspiracy hatched by FETO (Turkish state's dysphemism for Gulen Movement) as he did in recent past: facilitated the failed military coup to prove his contention that corruption charges (December 2013) and later failed military coup (July 2016) were basically conspiracies   hatched by FETO in alliance with the West to overthrow his government.

However, democracy in Turkey will be lost for ever if Erdogan succeeds in winning the election in re-run. There were two critical moments in recent times when people and civil society threw challenges to the Turkish state to be violently rebuffed back. One was the 2013 corruption charges against the Erdogan regime; the regime responded violently, engineered a coup and violently crushed the democratic voices of civil society.

Third, an Islamist Turkey is likely to provide more fodder to forces of Islamist radicalisation within and outside the region. It is therefore in the interest of international stakeholders and democratic states to extend support to forces of democracy, peace and stability within Turkey and in the region.