We are all Greta Thunberg, we want safe Earth

We are all Greta Thunberg, we want safe Earth 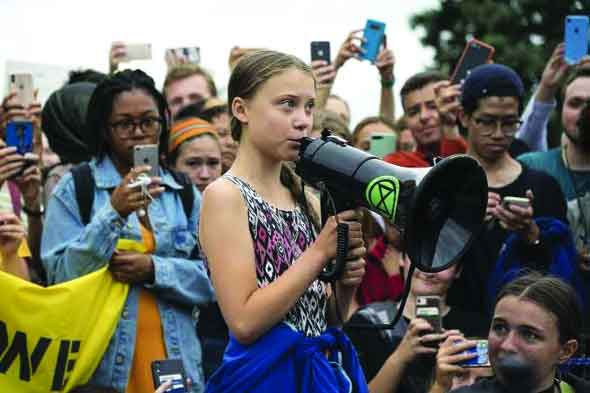 It is time to act, not just to speak. It is time for politicians to listen to what scientists have said. We as young citizens of this planet have all the right to urge our leaders to do what they can. Therefore, do not postpone it as simply climate talk. It is our turn to rethink about sustainable life on earth

Saving “Planet Earth” is an urgent need of the day. How fast our environment is changing is remarkably unbelievable. But how much we are doing to save it is too little. Therefore, debating semantics may seem useless when we are talking about who is polluting and how much that is affecting the planet and its inhabitants.

A new climate debate has been started by Greta Tintin Eleonora Ernman Thunberg, the teenage climate activist from Sweden. She demands an immediate solution from the world leaders to what she describes as “climate crisis”. When she first heard about global warming as an eight-year old, she says, she thought: “That can’t be happening, because if that was happening, then the politicians would be taking care of it.” But it did not happen the way she thought it out to be. Barely after eight years, she had to send a wakeup call to the world leaders. Inspired by American civil right activist Rosa Parks, who fought for equal rights for African Americans in the 1950s, Greta has decided to take the climate debate to the world stage. Apart from Parks, she has drawn inspiration from teenage activists of Florida (US), who all were protesting to put an end to gun violence. And Greta did it really. On August 2018, instead of going to school, she set alone outside the Swedish Parliament building with a banner displaying, “School Strike For Climate” (Skolstrejk for Klimatet).

Greta’s only objective then was to make politicians take notice and act to stop global warming. From a solo campaigner, she has soon become a mega star. She has a “mission impossible” ahead, which she wants to make it simply “possible”.

She has started a historic journey. Once her strike came up in public, it has made tens of thousands of students from around the world joined her #FridaysForFutureStrike. Her call was globally received by students by skipping schools on Fridays to protest against climate change. This has generated public consciousness not only in Sweden but also across the world. Her climate action journey today is known as “Fridays for Future Movement”. Further, the climate campaigners from different parts of the world came together in March 2019 to coordinate the first Global Strike for Climate. Nearly 1.6 million people from different corners of the globe took part in this strike. Besides, she has addressed some of the parliaments across Europe. Meanwhile, she is declared as the youngest ever “Time Person of the Year” award for her invaluable contribution to prevent global warming. She has even been nominated for a Nobel Peace Prize. Her historic speech at the UN Climate Action Summit on September 23 this year draws a sharp line: “This is all wrong… How dare you?... You have stolen my dreams and my childhood with empty words… You are failing us… And if you choose to fail us, I say: We will never forgive you.” This is more than enough to all our leaders. They have rightly got the message.

How does her campaign affecting all of us? Obviously, her climate activism has spread environmental awareness much beyond the realm of political leaders and their elite discussion forums. Second, her gatherings and speeches are being listened to by people carefully. Third, for the first time a person of her age has come out to stop degradation of the planet. Fourth, she has gathered support from millions of children of her age and beyond. Fifth, her meetings, discussions and dialogues at the top global forums have made children realise that it does not matter how small or young you are, one can make a change. Finally, the main highlight of her strike is that young people think that politicians are not doing enough to stop the climate crisis. And hence, the environment movement led by her made it clear that now these young people want to pressurise the politicians to act.

The global climate is changing much faster now than it has at any point of time in the last 2000 years. In fact “a stage is already reached where the climate change is causing 300,000 deaths every year and the ill-effects continuing could lead to 500,000 deaths a year by 2030. The change is adversely affecting 300 million people and 310 million more are likely to add to this category in the next 25 years and 75 million extra people will be displaced by the climate change” (Singh and Kahlan, 2014).

Today, a new category of “climate refugees” is being added to the millions of general refugees to many countries. In the past, we have heard about refugees those who are people forced to migrate due to war, violence, ethnic conflict and probably natural disasters. Currently, many people are needed to be relocated as the climate is changing very fast. The ecosystems are changing so quickly and it is unprecedented that many in Africa and in some parts of Asia for instance are failing to recognise what they once call as their homelands.

UN efforts are laudable. It was in 1992, the world leaders those who have gathered at the Rio Earth Summit adopted a series of environmental agreements, including the historic UN Framework Convention on Climate Change (UNFCC). Since then the world body is striving hard, but nothing concrete has come up so far.

What lies ahead is that our future is bleak. All the young people are inheriting a planet which is fast becoming uninhabitable. What Greta is arguing is a pure climate emergency. She said: “The science is clear and all we children are doing is communicating and acting on that united science. Now political leaders in some countries are starting to talk. They are starting to declare climate emergencies and announcing dates for so-called climate neutrality. But only setting up these vague, distant dates and saying things which give the impression of that things are being done and that action is on the way, will most likely to do harm than good” (speech at the National Assembly in Paris, July 23, 2019). This simply brings out the hollow promises of our leaders just to make us feel that actions are on its way.

It is time to act, not just to speak. It is time for politicians to listen to what scientists have said. We as young citizens of this planet have all the right to urge our leaders to change what they can. Therefore, do not postpone it as simply climate talk. It is our turn to rethink about our survival only.

(The writer is a young climate thinker based in Delhi)