3 killed in post-poll violence in WB in last 24 hrs; TMC, BJP blame each other for killings

3 killed in post-poll violence in WB in last 24 hrs; TMC, BJP blame each other for killings 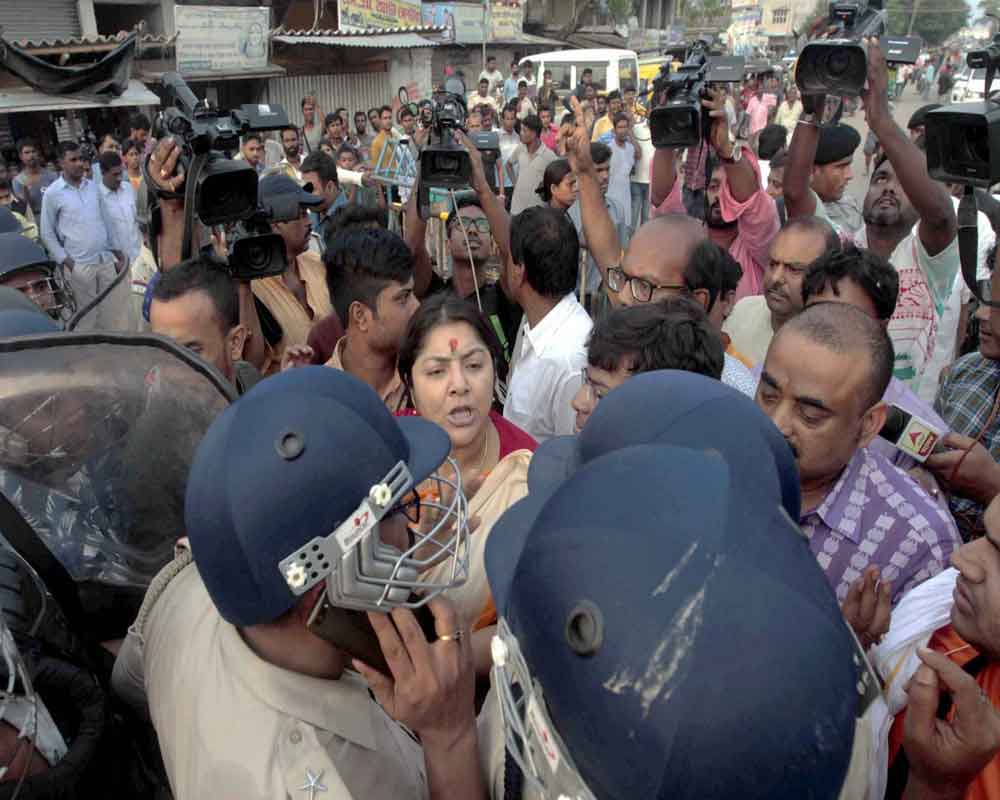 At least three persons were killed in post-poll violence incidents in West Bengal in last 24 hours even as both the ruling Trinamool Congress and the BJP blamed each other for these killings with chief minister Mamata Banerjee claiming that the saffron party was "planning to turn Bengal into Gujarat" but she will not allow it to happen.

Banerjee also claimed that 10 people have been killed in the state in violence following the Lok Sabha elections, and of them eight belonged to her party and the rest were BJP supporters.

She, however, did not give details of the 10 deaths.

While two people were killed when bombs were hurled at them in Kankinara area of North 24 Parganas district, another died after being allegedly beaten up by unknown miscreants in Purba Burdwan district, both incidents taking place on Monday night, they said.

The TMC and the BJP claimed the victims were their supporters and blamed each other for the killings. However, there was no official confirmation about political affiliation of these victims.

Addressing an event to unveil a new statue of Bengal reformer Ishwar Chandra Vidyasagar that was vandalized during the LS polls, Banerjee launched a scathing attack on the BJP, claiming it is "planning to turn Bengal into Gujarat" and "I am ready to go to jail but will not allow it to happen."

At the event, which was attended by eminent poets, writers and senior ministers, the chief minister also said, "Bengal is not a toy. You cannot play with it. You cannot do anything you want with Bengal."

Asserting that all the deaths during the post-poll violence will be investigated, she said,"every death is unfortunate. I will ask the chief secretary to provide assistance from the disaster management fund to the families of the 10 deceased."

Hitting back, senior BJP leader Mukul Roy Tuesday blamed Banerjee for the violence in Sandeshkhali, saying her speeches "fuelled" the attacks on supporters of the saffron party.

In one of the worst post-poll clashes in the state on Saturday, three persons were killed and some others are claimed to be missing at Sandeshkhali in North 24 Parganas district.

Roy, who was once the number two in the Trinamool Congress, switched over to the saffron camp in 2017, and is considered as a key strategist behind the stupendous performance of the BJP in the state.

Incidents of violence have been reported from various parts of the state, including North 24 Parganas, Coochbehar, Howrah and West Burdwan, resulting in many deaths and injuries since the Lok Sabha polls in which the BJP secured 18 of the 42 LS seats in the state, just four less than the TMC.

These clashes are continuing amidst a power tussle between the state and the Centre, which issued an advisory on Sunday to West Bengal, expressing "deep concern" over continuing violence there and its failure to check it, evoking a sharp reaction from Banerjee who accused the Centre and the BJP of "engineering violence to topple her government".

Meanwhile, the two deceased in Kankinara were identified as Mohammed Mukhtar and Mohammed Halim, police said adding that three people have been arrested for their alleged involvement in the incident.

The TMC claimed that the victims were supporters of the party and were targeted by miscreants hired by the BJP, a charge denied by the saffron party.

State minister and TMC's district president Jyotipriya Mallick alleged that the victims were targeted by miscreants hired by the BJP because they had voted for the ruling party in the state in the Lok Sabha elections.

However, BJP MP of Barrackpore Lok Sabha constituency Arjun Singh rubbished the allegations, saying that the incident was the result of a family feud and has no connection with politics.

Following the incident, a huge number of policemen, along with RAF personnel, have been deployed in the area.

When contacted, state ADG (Law and Order) Gyanwant Singh said he was collecting detailed information about the incident.