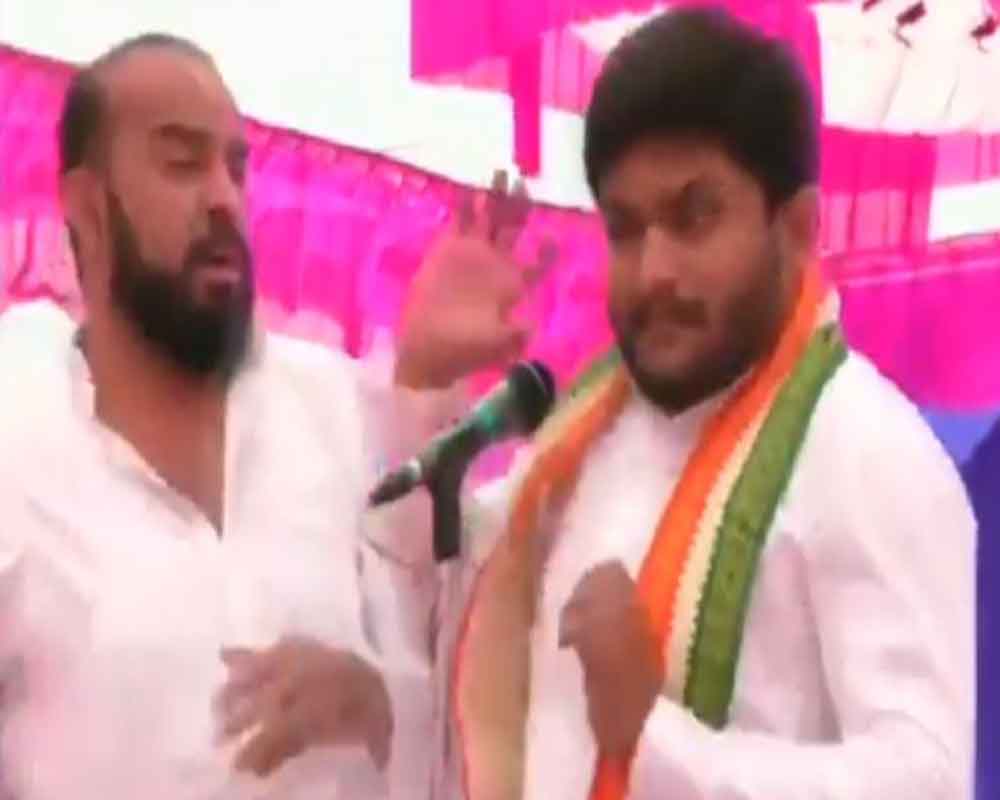 Congress leader Hardik Patel was slapped by a man Friday when he was addressing a poll rally in a village in Surendranagar district of Gujarat, said police.

An angry Patel blamed the BJP for the incident and said this was an attempt to kill him.

However, ruling party leaders said they have nothing to do with the incident, which they termed as a staged drama by the Congress to gain sympathy ahead of the Lok Sabha polls.

The man, identified as Tarun Gajjar, a resident of Kadi town of Mehsana district, suffered injuries after he was thrashed by Congress workers, Patel supporters and others at the rally venue, around 130km from here.

He is currently undergoing treatment as he was badly thrashed by people at the rally, said police inspector of Wadhwan, H R Jethi.

Gajjar said he is not associated with any political party and slapped the Patidar quota leader due to personal reasons.

As soon as Hardik Patel started his speech at Baldana village under Wadhwan taluka, Gajjar suddenly came on the stage and slapped him.

The incident was captured in cameras of news channels covering the event in the district, around 130km from here.

Congress candidate for the Surendranagar Lok Sabha seat, Soma Patel, was present on the dais when Patel was slapped.

Gajjar appeared angry and was seen saying something to Patel after slapping him.

Gajjar was overpowered by Congress workers, Hardik Patel supporters and others present at the rally, who also beat him up.

The police intervened and freed Gajjar and took him to a safer place in their vehicle, said Jethi.

In a video of the incident, Gajjar can be seen being mercilessly thrashed by both women and men, who also tore his cloths, before policemen intervened and took him away.

Following the incident, Patel lodged a complaint with the police.

"Since Gajjar was brutally thrashed by people, he was referred to a hospital in Limbdi town. It is still unclear why he slapped Hardik.

"The Congress leader claimed he does not know Gajjar. We have taken Hardik's written complaint and started our investigation, but not yet filed an FIR," said Jethi, adding the police were yet to question the attacker.

Talking to the media, Patel claimed the BJP had sent Gajjar to attack him.

"The BJP is trying to harm me. Many people were hired by the BJP to attack me. I do not know why that person did this.

"Even I requested the locals, who were beating him, to let him go and forgive him. I am sure that he was BJP's man. This was an attempt to kill me. I could have been killed if he was carrying a gun today," said Patel.

He said Congress president Rahul Gandhi had called him to enquire about his well-being.

BJP leader from the Saurashtra region, Raju Dhruv, refuted Patel's claim that Gajjar was sent by the ruling party to attack him.

"The BJP has nothing to do with this incident. We do not believe in such low-level politics. The truth is that people have now realised that Hardik had only used the Patidar community to satisfy his political ambitions.

"This is a staged drama by the Congress to gain sympathy," said Dhruv.

Talking to the media from his hospital bed, Gajjar said he has been planning to attack Patel since the last three -and-a-half years due to personal reasons.

"I am not associated with any political party. I am angry with Hardik since the last three-and-a-half years because my wife and my child had suffered because of him (during the quota agitation of August 2015).

"I was planning to attack him since then," said Gajjar, who is in his mid 30s.

Gajjar said he had tried to attack the 25-year-old politician, who joined the Congress last month, in the past too.

"But, I failed at that time. Finally, I got success today. I am not against the Patidar community. I am against Hardik," said Gajjar.