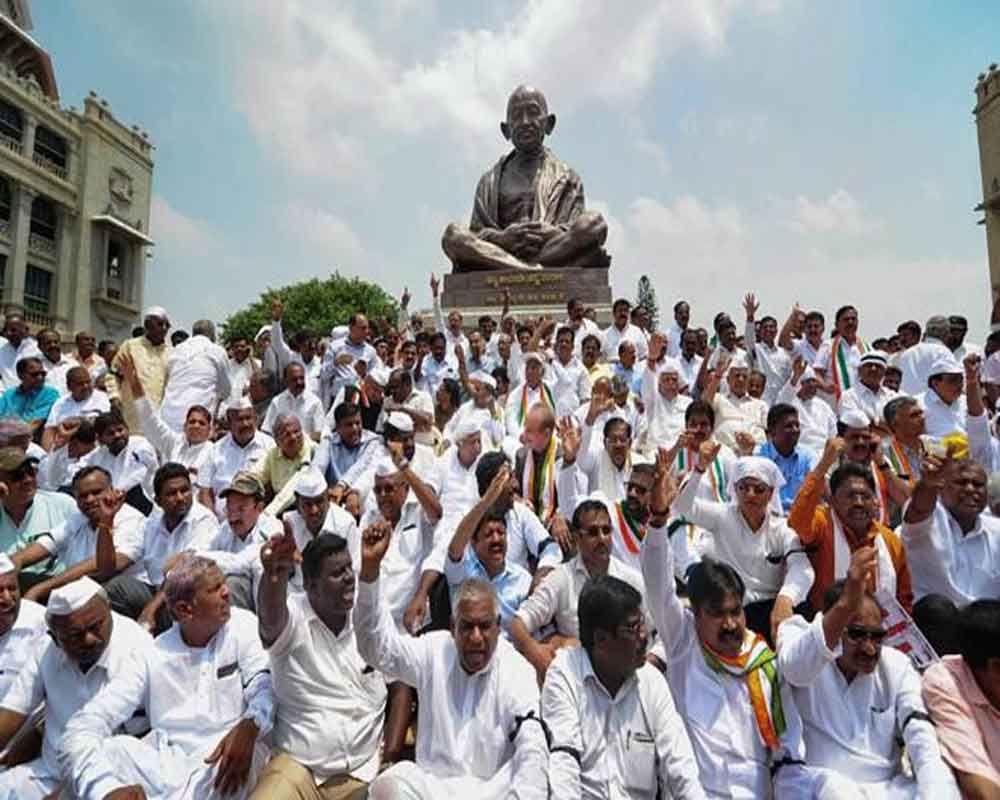 As the Congress intensified efforts to woo back its disgruntled MLAs in Karnataka on Saturday, one of them hinted that he might consider withdrawing his resignation and also said he would try to persuade others.

State Housing Minister and Hoskote MLA MTB Nagaraj, one of the 16 rebel Congress-JD(S) MLAs who resigned from the Assembly last week, dealing a blow to the coalition government, said senior Congress leaders, including former chief minister Siddaramiah, met him and asked him to withdraw his resignation.

"Siddaramaiah and Dinesh Gundu Rao called me and requested me to withdraw the resignation and stay in the party. I have sought time to mull over it.

"I told them I will speak to Chikkaballapura MLA Sudhakar and persuade him to withdraw his resignation. We are planning to stay here only," Nagaraj told reporters.

To a query on whether all the differences were sorted out, Nagaraj said he had resigned due to certain "discontentment" and that there was disagreement in every political party.

"The party high-command is trying to persuade the MLAs. I will also try my best to help them in their efforts," he added.

A day after Chief Minister H D Kumaraswamy made a surprise announcement in the Assembly that he would seek a trust vote in the House, efforts were intensified by the ruling coalition to reach out to the rebel MLAs.

Subsequently, Parameshwara too reached Nagaraj's house to convince him to withdraw his resignation.

Sources in the Janata Dal (Secular) said Kumaraswamy was in direct talks with at least four Congress legislators, who had resigned, and was hopeful that they would withdraw their resignations.

However, Ramalinga Reddy refused to comment on the development, saying he would not speak on politics till July 15 as he had to appear before the Assembly speaker.

Meanwhile, his daughter and Congress MLA Sowmya Reddy said she had no information about the meeting.

"I am in the Congress and I have not resigned. My father has resigned and all the questions pertaining to his resignation should be asked to him," she said.

In a bid to keep their flocks together ahead of the floor test in the Assembly that is likely to take place in the coming week, both the Congress and the BJP have shifted their MLAs to hotels and resorts.

Earlier, commenting on the developments, state BJP president B S Yeddyurappa said these efforts would not yield any result as the fall of the coalition government was "imminent".

"There is confusion in the Congress and the JD(S) due to which the MLAs are fleeing these parties. A systematic conspiracy is going on to bring the MLAs back," the former Karnataka chief minister told reporters here.

"The atmosphere is chaotic and the fall of the government is imminent," he said.

Claiming that the ruling coalition had lost majority in the Assembly, Yeddyurappa said seeking a vote of confidence was "meaningless".

Kumaraswamy made the announcement about seeking a trust vote on the floor of the Assembly after the Supreme Court ordered the speaker on Friday to maintain status quo on the resignations of 10 rebel MLAs of the Congress and the JD(S) till July 16.

The coalition government, which has been shaky since its formation last year following a post-poll arrangement in the wake of a hung verdict, is facing a serious crisis now with 16 legislators -- 13 of the Congress and three of the JD(S) -- resigning from the Assembly.

With the support of the two independents, the opposition BJP has 107 MLAs in the 224-member House.

If the resignations of the 16 MLAs are accepted, the ruling coalition's tally will be reduced to 100.

The speaker has a vote too.