Rafale deal no more a issue, no need for JPC: Nitish Kumar

Rafale deal no more a issue, no need for JPC: Nitish Kumar 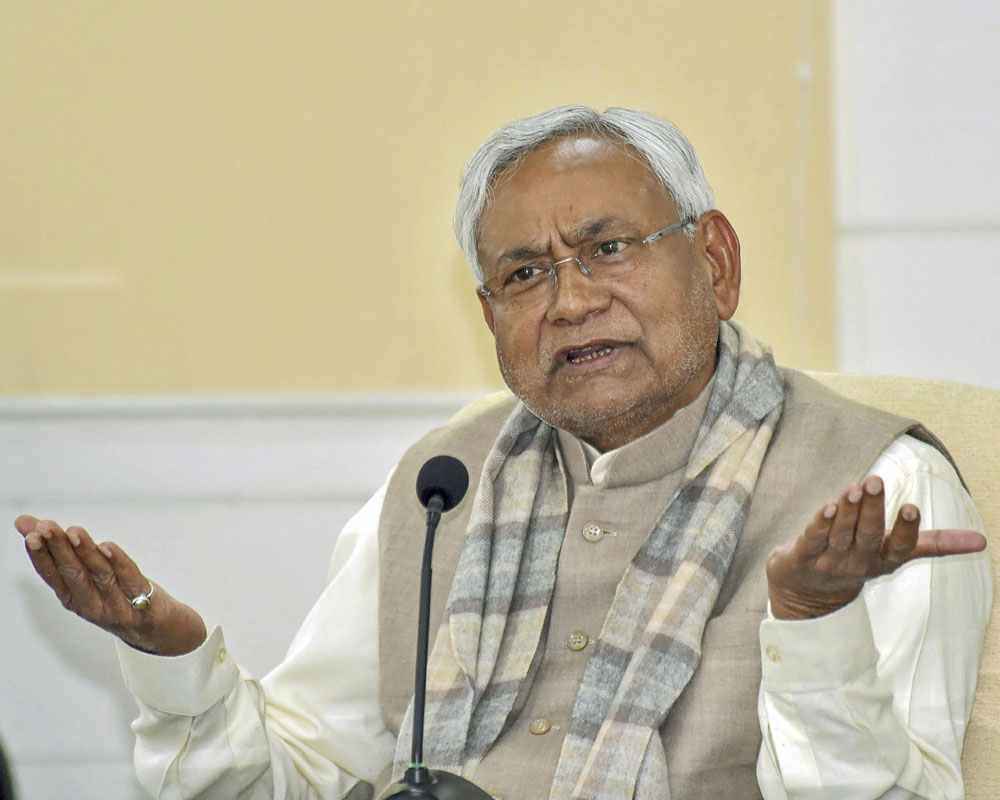 Bihar Chief Minister Nitish Kumar Monday said a joint parliamentary committee probe into the Rafale deal was not required as the Supreme Court had given its judgment and the Lok Sabha had debated the issue.

The Janata Dal (United) president also urged the government to hear the people of Assam on the the Citizenship Amendment Bill, which has been opposed by a large section of people and organisations in the Northeast.

Targeting opposition parties that have attacking the government over the Rafale issue, Kumar said, "The Supreme Court has delivered its judgment on the issue. It has already been debated in Lok Sabha. It is no more an issue."

"It is beyond one's fathom as what is left now that needs to be convinced to the people...JPC should be constituted for what?," he told reporters here after his 'Lok Samvad' (public interaction) programme.

The JD(U) president also refused to give much importance to the mahagathbandhan which, he said, had "no future" in Bihar.

"I am quite confident that Prime Minister Narendra Modi will again become the prime minister after the Lok Sabha polls... But the people are supreme, they will take the decision ultimately," Kumar, who will play an important role for the NDA in Bihar in the parliamentary election, said.

He said he does not buy the argument that the BJP will lose the Lok Sabha polls as it  has lost assembly elections in Madhya Pradesh, Rajasthan and Chhattisgarh.

The mahaghatbandhan (grand alliance) in Bihar has no future even though it attempts to make caste equations to gain electoral success by cobbling up with various political parties, the chief minister said.

"They (RJD and others like it) have made such attempts in the past also. But these equations have no force as people will ultimately vote on the work of a party," he said.

The grand alliance is aligning with anyone and everyone, Kumar said, adding, "this shows their lack of confidence."

Taking a swipe at Congress President Rahul Gandhi, Kumar said the man who tore into ordinance on convicted legislators has compromised with the issue of corruption and is meeting and aligning with people facing graft charges.

His barb was apparently directed towards the Congress's alliance with Lalu Prasad's RJD in Bihar.

Kumar, however, did not reply to a query during the interaction with reporters on the future he sees for Rahul Gandhi.

On the JD(U)'s stand on the Citizen (Amendment) Bill, Kumar said the amendment must keep the Assamese identity intact and should not hurt their sentiments.

The government must listen to the people of Assam before coming out with any amendment, he said.

"So far as the issue of the amendment bill is concerned, I have conveyed my views to the current dispensation (at the Centre) on it. I had a talk with Home Minister Rajnath Singh late yesterday evening in this regard," Kumar said.

He said the issue is currently lying with the joint select committee of Parliament and "I can give my reaction only after going through the amendments incorporated in the bill..."

"But whatever amendments be, it must keep the Assamese identity intact and their sentiments should be respected. The government must listen to the people of Assam before coming out with any amendment," Kumar said.

The chief minister said his party's view on the issue is already in public domain and a delegation from Assam, including students' unions and the Asom Gana Parishad (AGP), had met him in July last year during the JD(U)'s national executive meeting.

He said he had then expressed his views on the bill.

During the interaction after the Lok Samvad, the chief minister had an exchange of words with a TV journalist who had asked a question on the Sabarimala issue.