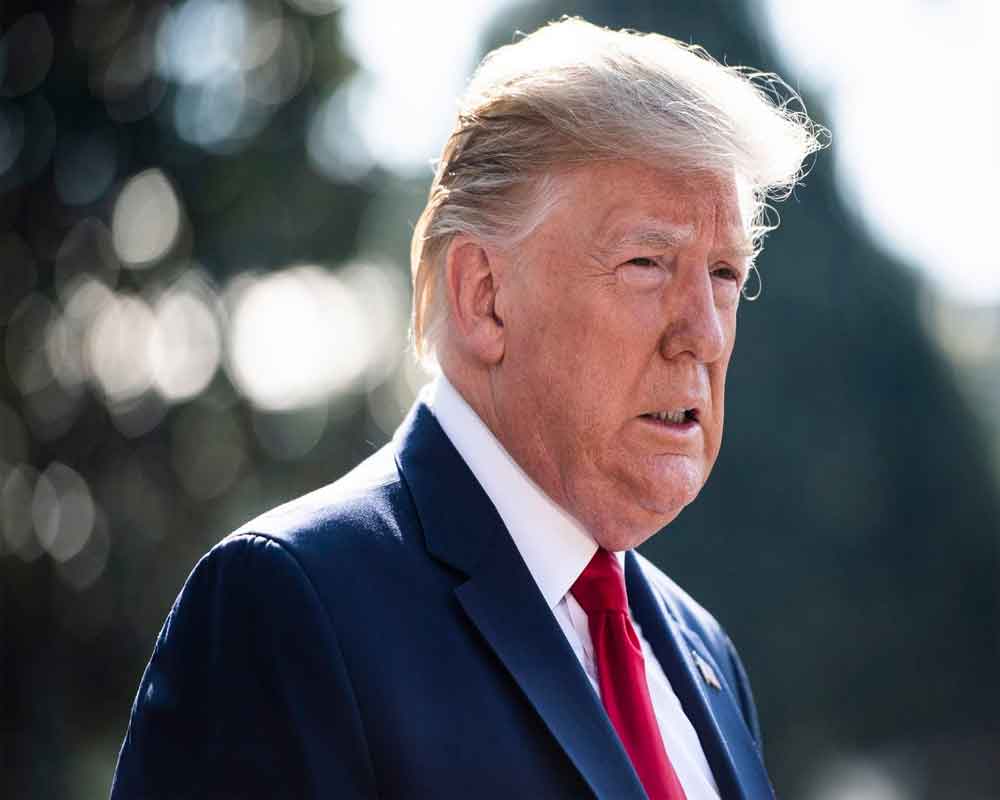 US President Donald Trump on Tuesday urged Prime Minister Narendra Modi and his Pakistani counterpart Imran Khan to work towards reducing tensions in the region over Kashmir, describing the situation as "tough".

Trump asked Khan over phone on Monday to "moderate rhetoric" with India, soon after a 30-minute conversation with Modi, during which the Indian leader raised the issue of "extreme rhetoric and incitement to anti-India violence" by leaders of Pakistan.

"Spoke to my two good friends, Prime Minister Modi of India, and Prime Minister Khan of Pakistan, regarding Trade, Strategic Partnerships and, most importantly, for India and Pakistan to work towards reducing tensions in Kashmir," the US President said in a tweet.

"A tough situation, but good conversations!" he said.

Earlier this month, India abrogated provisions of Article 370 of the Constitution to withdraw Jammu and Kashmir's special status and bifurcated the state into Union Territories, evoking strong reactions from Pakistan.

Continuing with his tirade against India over the Kashmir issue, Khan on Sunday called the Indian government "fascist" and "supremacist", alleging that it poses a threat to Pakistan as well as to the minorities in India.

Welcoming Trump's call to Modi and Khan, New York-based Indian-American attorney Ravi Batra said the US President, speaking for all Americans, essentially told "our dear friends" in the subcontinent to live terror-free, be good neighbours and give their citizens a better tomorrow with law and order.

"While speech is free and protected, hate-speech weaponises the citizenry, and leads to insurrection and civil unrest. America has had a love affair with India and Pakistan. It's time for a belated honeymoon on the subcontinent, even 73 years late," Batra said.

In a tweet, Batra urged Modi to invite Imran Khan for "bilateral tea" in Kashmir. "Like Abraham Lincoln, India has clamped down to prevent terror and establish law and order. Time to invite," he said.

Strongly defending Modi's move on Jammu and Kashmir, Japanese scholar Satoru Nagao, who is currently a visiting fellow at the Hudson Institute think-tank, said India needed to fortify Kashmir before the US withdraws from Afghanistan and Islamist radicals come to Kashmir.

"After US intervention in Afghanistan, the number of terrorist activities in J&K has decreased. Now, if US withdraw from Afghan, India needs to prepare. At the same time, to fortify Ladakh, separate and direct control will be effective measure for defend borders against China," Nagao said.

"China thinks Ladakh issue is related with their legitimacy of Aksai Chin. There is G219 road which connect between Tibet and Uighur. The road will connect with China-Pakistan Economic Corridor and part of BRI. China cannot move so strongly about Ladakh because of escalating US-China rivalry. But they will plan something as retaliation," he said.

"China can use same method to give AP state (Chinese say "South Tibet") special status or military build up, road construction in the Indo-China border area etc. Second Doklam is also an option. China can also use Pakistan as tool to increase pressure," Nagao claimed.

Sadanand Dhume, from the American Enterprise Institute think-tank, said India would be pleased with Trump reiterating that the issue needs to be resolved bilaterally.

However, Michael Kugelman, from the Widrow Wilson Center think-tank, said the presidential tweet makes a good optics for Pakistan.

"Not to burst any bubbles, but this is what US presidents do and have often done when things heat up on the Kashmir front: They advise India and Pakistan to work things out. That said, given recent developments, this tweet makes for good optics for Islamabad," Kugelman said.