Hong Kong returns to violence with tear gas and Molotovs

Hong Kong returns to violence with tear gas and Molotovs 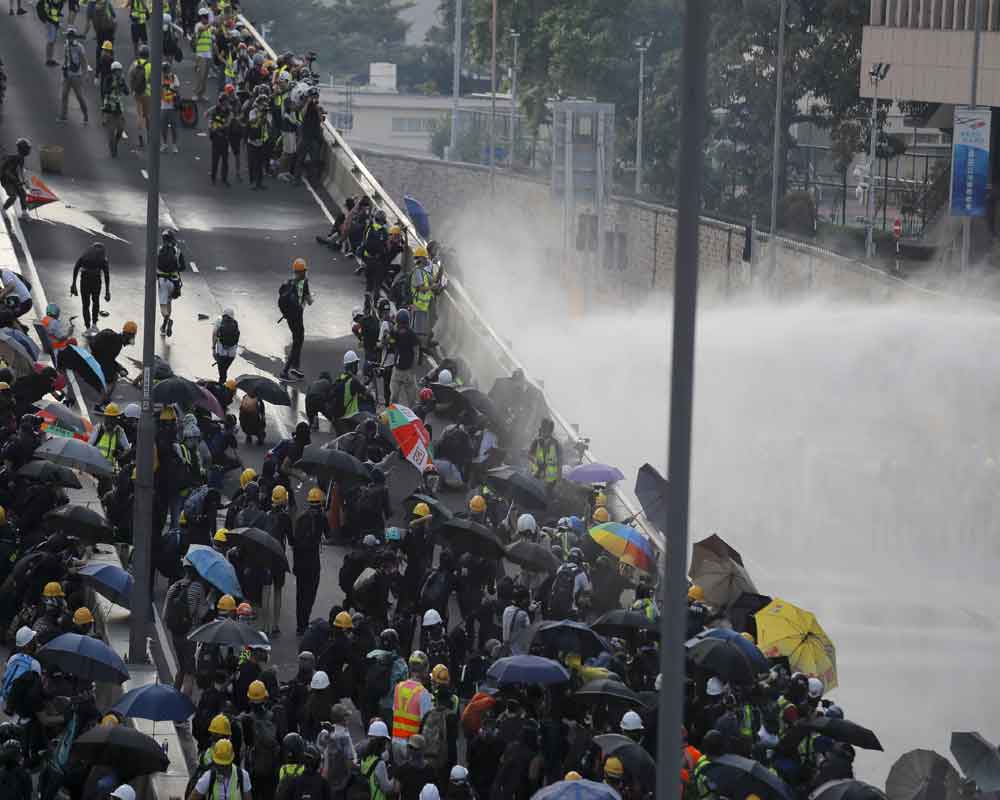 Tens of thousands of people defied authorities to march through the streets of the city in an unsanctioned rally on Sunday, the latest expression of a popular revolt that has raged for the last 99 days.

But the rally descended into violence when small groups of hardcore activists -- known within the movement as "braves" -- tried to attack the city's main government complex.

Police fired repeated volleys of tear gas and deployed water cannon trucks after Molotov cocktails and rocks were thrown over security barriers surrounding the complex, which has become a frequent flashpoint in the ongoing protests.

Local television networks broadcast footage of protesters tearing down and burning a banner celebrating the upcoming 70th anniversary of the founding of communist China -- as well as burning a Chinese flag. As evening set in, protesters retreated, chased by riot officers and water cannon firing blue-dyed water.

Some demonstrators built barricades, set fires and vandalised subway stations but the crowds avoided further direct clashes and largely ran away when ranks of police officers got close.

The clashes ended a relative lull in recent days in the intensity of skirmishes between police and protesters.

The once-stable international hub has been convulsed by weeks of huge, sometimes violent rallies calling for greater democratic freedoms and police accountability.

The movement is the biggest challenge to China's rule since the city was handed back by Britain in 1997 and shows no sign of ending.

Under a deal signed with Britain ahead of the handover, Hong Kong is allowed to keep its unique freedoms for 50 years. But democracy activists accuse Beijing of reneging on those promises by tightening political control over the semi-autonomous territory and refusing calls for universal suffrage.

Earlier on Sunday, protesters rallied outside Britain's consulate in Hong Kong, demanding London do more to protect its former colonial subjects and ramp up pressure on Beijing over sliding freedoms.

Hundreds of demonstrators sang "God Save the Queen" and "Rule Britannia" outside the consulate, waving the Union Jack as well as Hong Kong's colonial-era flags. Many of the protest signs accused Britain of not doing enough to confront Beijing over its tightening grip on the semi-autonomous city.

"Sino-British Joint Declaration is VOID," one read, referencing the 1984 agreement that paved the way for the city's handover, a deal that Hong Kongers were given no say over.

Many called for Hong Kongers who want to leave the city to be granted citizenship in Britain or other Commonwealth nations.

Some Hong Kongers were given British National Overseas (BNO) passports before the handover, a document that allows holders easy travel to the UK but grants no working or residency rights.

"At least with the full citizenship, they can protect Hong Kong people from the Chinese government," protester Anthony Chau, who holds a BNO passport, told AFP. Earlier this week, some 130 UK lawmakers signed a joint letter calling for Britain and Commonwealth countries to come up with an "insurance policy" for Hong Kongers to resettle overseas should they wish to.

Hong Kong's summer of rage was sparked by a now-abandoned plan to allow extraditions to the authoritarian mainland, a move that prompted million to hit the streets.

As Beijing and local city leaders doubled down, the protests rapidly snowballed into a much wider anti-government movement.

But the pro-democracy movement has vowed to continue until key demands are met, including an inquiry into the police, an amnesty for those arrested and universal suffrage.

Lam has said she is willing to hold a dialogue but protesters must abandon violence first.

But the movement is leaderless -- a response to authorities prosecuting high-profile democracy figures from previous protests -- making it difficult for Lam to know who to negotiate with.

Online message boards have filled with plans for new rallies and strikes in the coming weeks, fuelled by two key anniversaries.