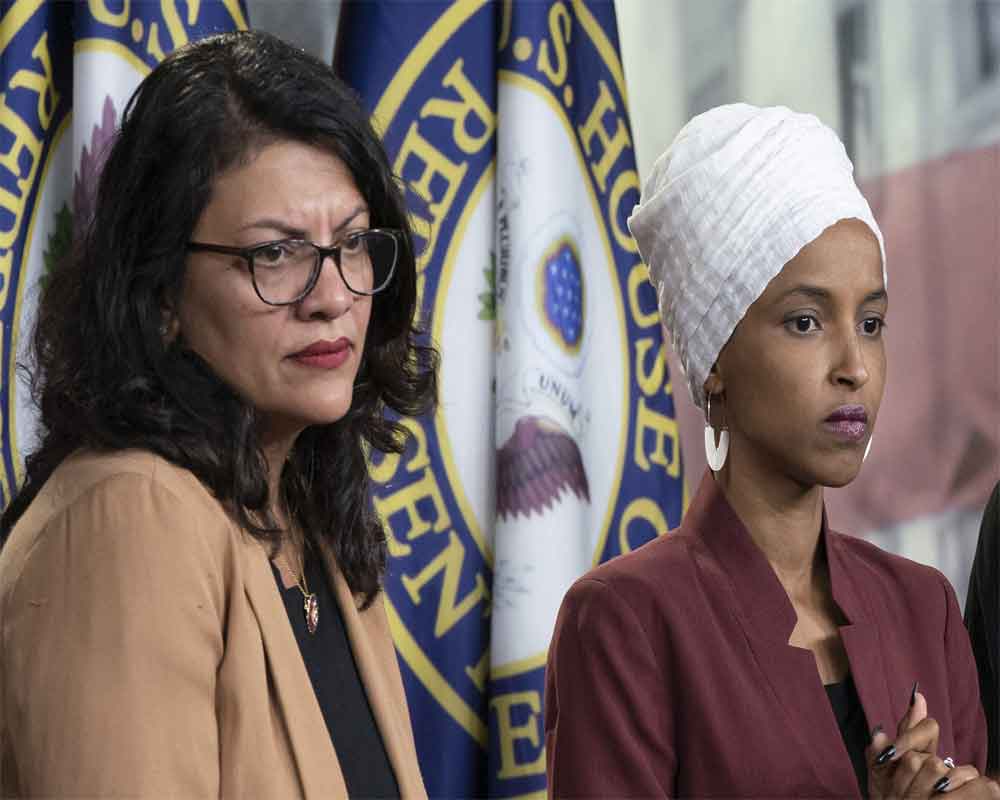 Israel said Thursday that it will bar two Democratic congresswomen from entering the country ahead of a planned visit over their support for a Palestinian-led boycott movement, a decision announced shortly after President Donald Trump tweeted that it would "show great weakness" to allow them in.

The move to bar Reps. Rashida Tlaib of Michigan and Ilhan Omar of Minnesota from visiting appeared to be unprecedented.

It marked a deep foray by Israel into America's bitterly polarised politics and a sharp escalation of Israel's campaign against the international boycott movement.

The two newly-elected Muslim members of Congress are outspoken critics of Israel's treatment of the Palestinians and have repeatedly sparred with Trump over a range of issues.

Tlaib's family immigrated to the United States from the West Bank, where she still has close relatives.

They had planned to visit Jerusalem and the West Bank on a tour organised by a Palestinian organisation aimed at highlighting the plight of the Palestinians.

It was not immediately clear if they had planned to meet with Israeli officials, and spokespeople for the two congresswomen did not immediately respond to a request for comment.

Prime Minister Benjamin Netanyahu said Israel is "open to critics and criticism," except for those who advocate boycotts against it.

"Congresswomen Tlaib and Omar are leading activists in promoting the legislation of boycotts against Israel in the American Congress," Netanyahu charged.

He said their itinerary "revealed that they planned a visit whose sole objective is to strengthen the boycott against us and deny Israel's legitimacy."

Omar denounced the decision as "an affront" and "an insult to democratic values."

"This is not a surprise given the public positions of Prime Minister Netanyahu, who has consistently resisted peace efforts, restricted the freedom of movement of Palestinians, limited public knowledge of the brutal realities of the occupation and aligned himself with Islamophobes like Donald Trump," Omar said in a statement.

Shortly before the decision was announced, Trump had tweeted that "it would show great weakness" if Israel allowed them to visit.

"They hate Israel & all Jewish people, & there is nothing that can be said or done to change their minds."

He went on to call the two congresswomen "a disgrace." The US ambassador to Israel, David Friedman, endorsed the decision after it was made, saying Israel "has every right to protect its borders" against promoters of boycotts "in the same manner as it would bar entrants with more conventional weapons."

Trump's decision to urge a foreign country to deny entry to elected US officials was a striking departure from the long-held practice of politicians from both parties of leaving their disputes at the water's edge.

Democratic lawmakers in the US Congress denounced Israel's decision.

Top ranking Senate Democrat Chuck Schumer of New York said it was a sign of weakness instead of strength and "will only hurt the US-Israeli relationship and support for Israel in America."

Israel has sought to combat the BDS movement, which advocates boycotts, divestment and sanctions against Israeli businesses, universities and cultural institutions.

The country passed a law permitting a ban on entry to any activist who "knowingly issues a call for boycotting Israel."

Last month, Israeli ambassador to the US Ron Dermer had said Israel would not deny entry to any member of Congress.

The interior ministry said in statement Thursday that "the state of Israel respects the American Congress, in the framework of the close alliance between the two countries, but it's unacceptable to allow the entrance to the country of those who wish to harm the state of Israel, especially during their visit."

Israel said it would consider any request from Tlaib to visit relatives on humanitarian grounds.

Israel often hosts delegations of US representatives and senators, who usually meet with senior Israeli officials as well as Palestinian officials in the occupied West Bank.

Israel controls entry and exit points to the West Bank, which it seized along with east Jerusalem and the Gaza Strip in the 1967 Mideast war.

The Palestinians seek these territories for their future state. MIFTAH, the Palestinian organisation that was set to host Tlaib and Omar in the West Bank, issued a statement saying that Israel's decision was "an affront to the American people and their representatives" and "an assault on the Palestinian people's right to reach out to decision-makers and other actors from around the world."

The move could further sharpen divisions among Democrats over Israel ahead of the 2020 elections. Republicans have amplified the views of left-wing Democrats like Tlaib and Omar to present the party as deeply divided and at odds with Israel.

Democratic leaders have pushed back, reiterating the party's strong support for Israel, in part to protect representatives from more conservative districts.