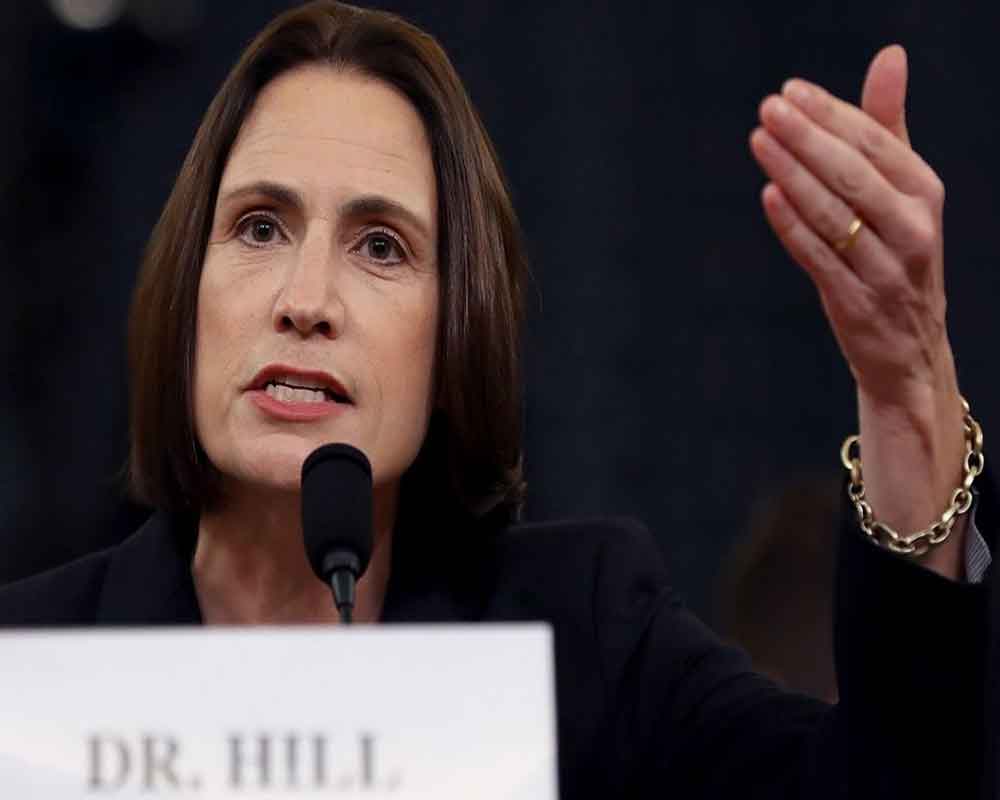 A former top White House adviser on Russia on Thursday said the "fictional narrative" pushed by Donald Trump and the Republicans about Ukraine's role in influencing the 2016 US election was propagated by Russia, as she testified before the House Intelligence Committee's impeachment probe.

Fiona Hill, the former top Russia expert on the National Security Council, was testifying before the House Permanent Select Committee on Intelligence as part of its series of public hearings on its impeachment proceedings against President Donald Trump.

The impeachment inquiry centers on the accusation that Trump withheld a White House visit for Ukraine's president and security aid for the country as leverage to push the government to announce investigations into former Vice President Joseph Biden and the claim that Ukraine conspired to help  Democrats in the 2016 election.

Hill said that such a fictional native is being perpetrated and propagated by the Russians.

"Based on questions and statements I have heard some of you on this committee appear to believe that Russia and its security services did not conduct a campaign against our country and that perhaps somehow for some reason Ukraine did. This is a fictional narrative that is being perpetrated and propagated by the Russian security services themselves," Hill said.

“The unfortunate truth is that Russia was the foreign power that systematically attacked our democratic institutions in 2016. This is the public conclusion of our own intelligence agencies confirmed in bipartisan congressional reports. It is beyond dispute even if some of the underlying details must remain classified,” she said.

"Our nation is being torn apart. Truth is questioned. Our highly professional expert career foreign service is being undermined. US support for Ukraine which continues to face unto Russian aggression has been politicised," she said.

She said the Russian government's goal was to weaken the US, to diminish America's global role and to neutralise a perceived US threat to Russian interest.

Responding to questions, Hill said that the Russian's interests are to delegitimise US' entire presidency.

"So, one issue that I do want to raise, and I think that this would resonate with our colleagues on the committee from the Republican Party, is that the goal of the Russians was really to put whomever became the president by trying to tip their hands on one side of the scale under a cloud,” she said.

"So, if Secretary, former First Lady, former Senator Clinton had been elected as president, as indeed many expected in the run up to the election in 2016, she too would have had major questions about her legitimacy,” she added.

Hill said that the Russians like to put a lot of blame on US allies for incidents that they have perpetrated.

The White House continued to dismiss the impeachment testimonies.

"As has been the case throughout the Democrats' impeachment sham, today's witnesses rely heavily on their own presumptions, assumptions and opinions," the White House Press Secretary Stephanie Grisham said.

"These two witnesses, just like the rest, have no personal or direct knowledge regarding why US aid was temporarily withheld.  The Democrats' are clearly being motivated by a sick hatred for President Trump and their rabid desire to overturn the 2016 election. The American people deserve better," Grisham said at the conclusion of the hearings on Thursday.

During her regular press briefing on Thursday, speaker of the House Nancy Pelosi said that she believes the evidence is clear and shows Mr Trump used the American government as leverage for his own personal gain.

David Holmes, a former US Embassy official at Kiev told lawmakers that he heard the president following up on an "investigation" related to former Vice President Biden.