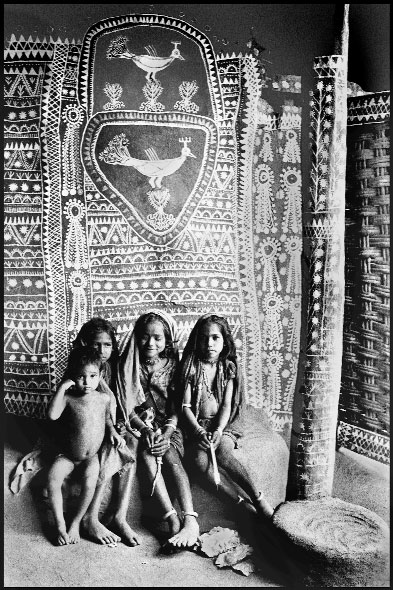 Meticulous, lean, tidy and eclectic — artist Jagdip Jagpal had breathed an avant garde stroke into the India Art Fair, making it a melange of works that are essential but not bulging at the seams with hype and hubris. Works of art from all over South Asia and the world, including paintings, installations, sculptures and video work among others, had come under one roof at the fair. About 75 exhibitors from 24 Indian and international cities created a cornucopia of imagery, materials and momentousness. Some works stood out for vintage value and ingenuous traits in technique and novelty.

The best photograph at the fair was the interiors of a Rathwa tribal house taken by Jyoti Bhatt in 1980. He has just been conferred upon with the Padma Shri and one can look at his works in the Museum of Art (MAP) and Painting Booth to savour the past of India’s vanishing traditions.

J. Swaminathan at the Bharat Bhavan in Bhopal to research the living traditions of Madhya Pradesh. It was to trace these connections and cross-connections that the MAP booth showcased works by three artists in a single curated space among which Bhatt was one.

Bhatt, whose work is held in several public collections — both abroad, such as in the Tate Modern and The Museum of Modern Art (MOMA), and in the National Gallery of Modern Art — has been actively engaged with photography since the mid-60s, and his photographs constitute an important chapter in the history of photography in India, demonstrating great artistic sensibility, creativity and a unique understanding of traditional cultures.

He began documenting the folk and tribal culture of rural India in the summer of 1967. He travelled widely, visiting villages and tribal regions, photographing folk arts and craft traditions in their original environment, along with the people who inhabited these spaces. Much of his work records village and indigenous art forms, the photographs synthesise human figures with static backgrounds that show painted, or drawn, images on walls or floors.

Mesmerising art that echoes the magic of the miniatures, Alexander Gorlizki’s works on paper at Anant Art combine such diverse elements as hand-painted figures, ornamental and textile patterns as well as photographs and magazine pages.  His compositions range from geometric abstraction to loosely narrative surreal scenes that offer views into layered worlds where Eastern and Western iconographies and historical references are found re-contextualised and co-mingling in a contemporary and flattened visual space.

Gorlizki’s interest in uniting elements from Eastern and Western geographies presents itself as much in the process of making the works as it does in the visual language of each piece.  He begins each drawing by meticulously mapping out the composition in his New York studio.  The paper is then sent to the atelier of Riyaz Uddin in Jaipur, India, where sections of the paper are fastidiously painted with a single-hair brush in the Mughal miniature style. Often one paper will travel back and forth between Gorlizki’s New York studio and the Indian atelier for years during which both parties will add elements to the paper until the work is deemed complete

Girl with the Red Stole is Neeraj Goswami’s foray into the world of sculptures. Small, quaint and cute,  minimalism and fluid lines come together  to carefully devise the structure of his patinated work. “I am deeply pained by the frequency of incidents that speak of violence against the girl child,” explains Neeraj.

“My expression comes forth as a reaction to the crime and violence against the girl child in our society. She is given a blanket of security in the form of a red stole to preserve and protect her innocence and vulnerability, covering her with a veil is a mark of love and compassion.”

Neeraj also makes a point of exploiting open forms within to create just contours of the female head with the flowing form, as delineated by her face — he has, in effect, sculpted in nearly equal measure both the volume and actual mass of the youthful face, together with the space in which it exists.

A black elephant created out of repurposed wood and glue, Arunkumar HG’s sculpture is about environmental and zoological contexts. It talks to us about habitat and the haunts of wildlife patterns and the exploitation of animals and the mapping of misery.

“My present body of works explores the tacit relationship between the spread of consumerist culture and the systematic decline of natural resources,” says Arunkumar, a veteran curator, historian, multimedia artist and sculptor.

“My collection of cast forms deliberately recalls the processes of mass production yet my choice of materials (wood pulp, cement, aluminium, wood glue and paint) point to the environmental cost implicit in their creation. My arrangement of animals evokes a nostalgic park that encapsulates long-lost values and the need to reclaim a workable relationship with the natural world. The juxtaposition of the animals with the guardian figures printed on wood suggests that recuperation and conscious correction can only be found if we vigilantly guard against further intrusions,” he concludes.