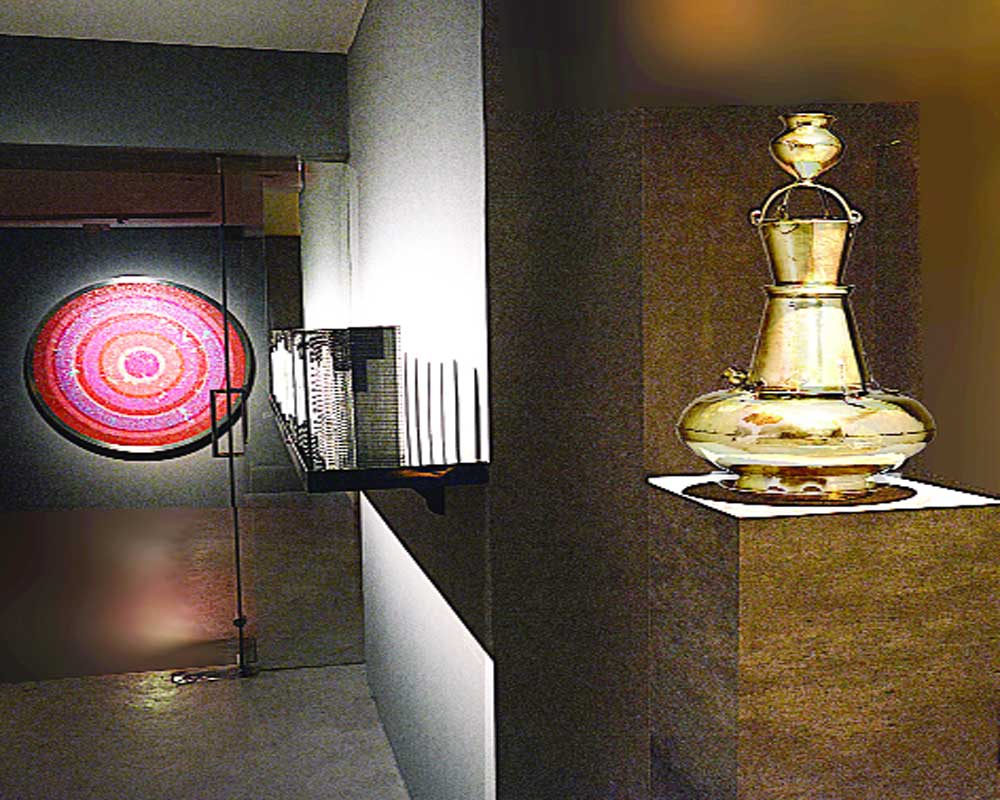 The show at Palette Art Gallery is about outlasting time and keeping to the grain of originality, says U Nair

The artistic development throughout history compels us to appreciate how creators have translated their ideas into tangible art. And now, with even more means and creative liberty, no medium poses a challenge. Not even metal. Rohit Gandhi’s Palette Art opens the season with a nuanced exploratory suite of works — Burnished/Tarnished — that plays around with its malleability.

The artist tops the collection with his leitmotif of the narrative in the story of experiments with metal. Gupta’s oeuvre has blossomed with the use of metallic lustre which can be in any form, be it vessel or other metallic compositions. Gangajal to Brancusi reflects his fondness for doubling effects and recurring motifs. The paired objects — two pails, inverted handi and the small water pot — highlight the minimalist associations. Enlivened by the odd surrealist touch, it is the weight of  the brass sculpture  that alludes to the shiny reinterpretation of India’s everyday idioms.

On the next wall is Gigi Scaria’s Around the Corner. Gandhi’s placement of Gigi’s work gets you thinking of the infinite possibility of media and materials. The objects are carefully arranged to reveal the architecture of the gallery, encouraging the viewers to be conscious of the sculptural engagement.

Aesthetically, Gigi soars as a cutting edge creator, who creates work that moves from minimalist to an eclectic  form of avant garde reflections. The metallic matte finish or lustre in his installation represents qualities such as truth (because it does not pretend to be anything other than what it is), order, complexity , simplicity or an alluring unseen harmony. His work proves to be a perfect counterpoint to Subodh in many ways.

Enticing in her explorations is Bangladesh artist Tayeba Begum Lipi’s work from 1.7 million mi² to 55,598 mi². It is a series of four circular panels framed in razor blades, suggesting the notions of Partition. Translating geophysical boundaries into art, she presents the sub-continent’s land mass of 1.7 million square miles, dissected into maps of Bangladesh, India and Pakistan.

In an interview she said, “When I was a child, I used to hear stories from my parents when the inhabitants from different beliefs and perspectives used to live together happily. I used four etched maps on polished stainless-steel plates to create a scratched and wounded reflection of the subcontinent and its inhabitants, who are survivors or an aftermath of the Partition, borders and barbed fences.”

Bharti Kher reinvents her language and practice with the bindi. It unlocks the matters of the heart, is a summation of experiences about the materiality of a cultural fabric and an inherent subtle feminist narrative born of harsh and haunting truths. In tone, geometry and coloured contexts, bindis for Kher are like markers that carry memory, narrative and the sleight of hand. They become silent sentinels — a witness to the day in the life of a person, a residual idea, a leftover experience, even small rituals that fill our lives. In an interview, Kher has explained: “It’s the small markers that you make in your life that have meaning for you, and you’re not really sure why you do that. I celebrate the passion, aesthetic and the beauty of the works, and how they play visually. They’re uncentered. I like how I can take simple form somewhere else, and then bring it back into my own practice.”

New York dweller and mentor Zarina Hashmi’s Twisted House 1984 is dulcet and full of an esoteric essence of nostalgia. Through a few lines, abstracted geometry, essential colours and evoking the language Urdu, she uses individual expression to capture collective experience. Memory and history and Partition and boundaries, everything comes into play. In the theme, we sense the natural flow of human relationships, the corridors of communication and the vibrations that enhance or disturb understanding. Zarina creates corollaries in conversation, of social understanding and harmonious communities.

Vibha Galotra’s Trip to Mars echoes social consciousness and sparks conversations on mass migration. Galhotra addresses the impact of globalisation on topography and the environment. She calls into question natural disasters and limited natural resources. Deeply influenced by the Yamuna River, her work from the series Life on Mars focusses on recent exploration of our neighbour planet in search of viable sources of water. The enticing surreal ghungroos are melded into reconstructed photographs pulled from NASA’s research that began in 2005. The work compels  futuristic inquiry  and questions why we don’t preserve our resources.

Staple pins become her material. And sky scrapers become her composition. Pooja Iranna’s stapled grids could be mistaken for bar graphs but she positions the very existence of civilisation all over the world. She does that with the stapled sky scraper like creations that illustrate her pre-occupation with architecture, memory, experience and the vision of yesterday, today and tomorrow.

Among the others in the epic suite are Himmat Shah’s elegant bronzes of 2004 and 2005. Ravinder Reddy’s Sridevi is commanding in scale and demeanour. Here is a hybrid Sridevi, her history going back to roots in the past  and has one foot in the pop cultural present. Reddy revels in his sculpture being an emblem of  heroic art with a common man’s  touch — kitsch for the ages.