A push to sort out the urban waste crisis

A push to sort out the urban waste crisis 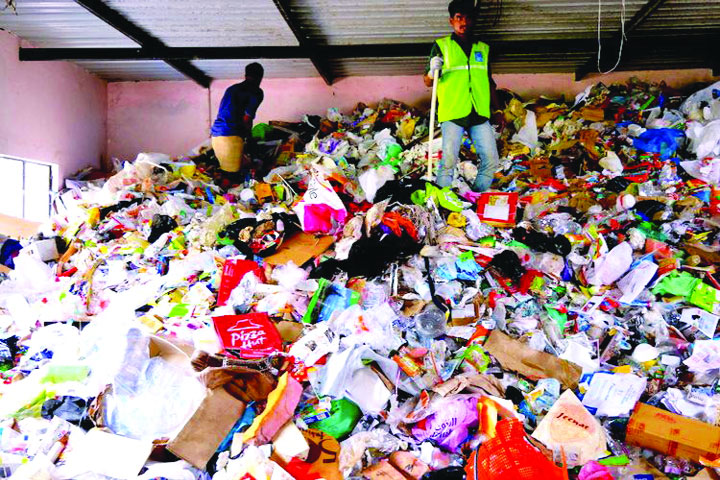 Local, State and Central governments will have to work cohesively to look at mechanisms to bring all stakeholders on board to turn garbage into a resource

Urban India generated about 59.56 million metric tonnes of municipal solid waste (MSW) in 2019. While the average collection rate was reported to be around 92 per cent, only about 37 per cent of the collected waste was treated. As per the biannual review report (BUR) submitted by the Government to the United Nations Framework Convention on Climate Change (UNFCCC) in 2014 this untreated MSW, when disposed, contributed to nearly 15065 x106 Kg CO2Eq of the country’s greenhouse gas (GHG) emissions, leading to climate change on a global scale.

All policymakers and administrators dealing in waste management thoroughly understand the wealth potential associated with this MSW, which can be unlocked with appropriate energy and economic linkages, yet the codes to unlock such potentials are not unified. Once mixed, many potentially recyclable items lose their value for recycling. Hence, segregation at source is the key to manage MSW in an efficient manner. Solid Waste Management Rules require people to hand over segregated garbage to Urban Local Bodies (ULBs). However, proper implementation and monitoring of this golden rule which may turn many downstream processes in waste management more efficient and effective, is lacking. To discover what would motivate residents to segregate garbage and help cities reduce their waste burden through appropriate management of organic and inorganic garbage in a decentralised manner, a pilot project was implemented from January to mid-November this year in Varanasi, Uttar Pradesh (UP). The project was initiated under the Development and Management of Nationally Appropriate Mitigation Actions (NAMA) project in India.

Under the pilot intervention, initially, a group of three colonies-Saraswati Nagar, Krantipalli and Rambagh & Kolhua Vinayaka were piloted from January (Group 1) and this was later extended to include Vijaynagaram and Vijayanagaram extension (Group 2) in September.

Starting with information education and capacity building (IEC) drives in these colonies, pilot interventions were started where households were encouraged to hand over segregated waste to the Varanasi Municipal Corporation (VMC) collection staff on a daily basis. From August onwards, lucky draw competitions for households giving segregated waste to collectors were initiated to increase the motivation and engagement of residents.

Initially, it was found that none of the households were separating garbage. But, due to the source segregation awareness programme  and engagement of the VMC staff, around 67.42 per cent of the residents began to segregate garbage by the end of the pilot in November. The number of households giving segregated garbage went up steeply from 40 per cent in August, after the announcement of the lucky draws.

In Group 1 colonies, due to the availability of large garbage collection bins or existing garbage accumulation points, residents either self-dispose the waste or get it disposed through their domestic help in an unsegregated manner. For them the domestic help provided a better level of garbage collection services, compared to door-to-door collection by the VMC as the staff was only available to collect waste from the main  gate of the apartment blocks. As a result, many households residing on higher floors were not interested in availing of the door-to-door collection services provided by the waste collection staff and used to dispose mixed garbage.

In Group 2 colonies, which had mostly bungalows and row houses, due to the non-availability of any garbage disposal point and appropriate service by the VMC staff, almost all residents were handing over waste to VMC collectors.

As an outcome of the pilot, the services provided by the VMC staff were streamlined further. Hence, it can be concluded, that with an appropriate infrastructure, service support from ULBs and regular monitoring, it is possible to increase the number of households providing segregated garbage.

While certain people were motivated to do source segregation of MSW based on awareness programme inputs, others responded to incentives. Though such measures can be effective in motivating households to separate garbage in the initial phase, once source segregation becomes a practice, such incentives might not be required.

The experience from these pilots also revealed that awareness, along with appropriate infrastructure (for collection and treating waste), can indeed motivate people to segregate waste at source. However, for mass involvement, a habit of segregation will have to be infused through appropriate IECs, monitoring, a motivational mechanism, monitoring (possibly through Information Technology-based systems) and penalties.

With regards to IECs, the concept and benefits of source segregation should be strongly interlinked with health and economic benefits to the city, demonstrating direct impact and benefits to the public. The local, State and Central governments will also have to work cohesively to look at possible mechanisms to bring all stakeholders on board to turn waste into a resource and demonstrate a strong political will to bring about change.

Interlinking workers from the informal sector, building their capacities and adjusting key performance indicators of existing staff members will also help enhance the level of services in cities.

(Manuja is a Fellow at TERI and Gaurav is a Technical Advisor at GIZ India. This article has inputs from NAMA, India. Views expressed are personal.)