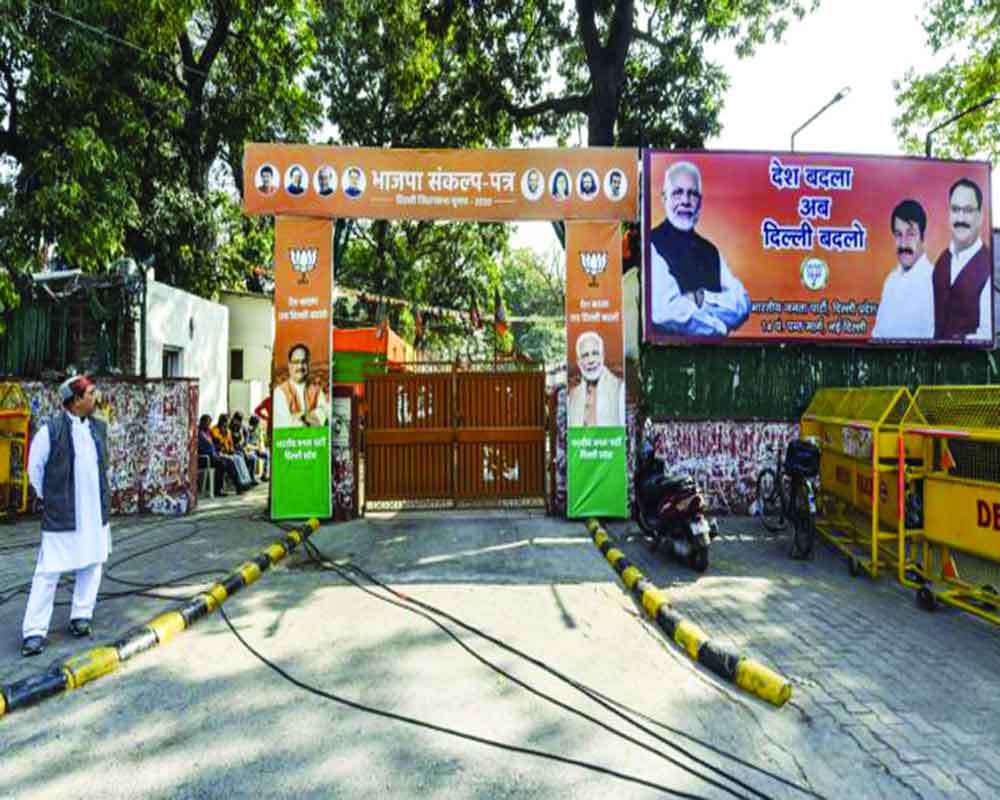 The party tested the swell factor of its polarisation agenda in Delhi and may still replicate it in Bengal, Bihar

Undoubtedly, the Delhi verdict has been a blowback to the hate rhetoric of the BJP, which had pitched it to a national referendum on its identity politics. Affirmatively, it has swerved the axis back on governance as the spine of a people’s mandate. But for the BJP, the religious polarisation and the vituperative campaign have worked the way it has wanted. Particularly in a literate, aware and urbane Delhi, the distillate of India as it were. First, uncomfortable as Delhiites might be, using the Shaheen Bagh protests over citizenship laws as a metaphor, it forced a binary conversation and picked up fence-sitters, those who gave it a vote surge and eight seats from a pre-poll estimate of two or a near wipeout. Delhi has, therefore, proved to the BJP that in the absence of a local governance or performance record and even without local faces, its agenda has a speed-breaker narrative that did make the AAP sweat in the last days of campaigning. And if this polarisation, with its most repugnant avatar, has even given it an apology of a gain in Delhi, the BJP will use it in varying degrees, depending on its spin cycles in States. Second, each Opposition party, which is now tactically avoiding a confrontation with the BJP and refusing to bite the bait that only makes the latter look like the victim, is being compelled to take a stand on the emotive issue of religion. Hence the rabid vigour of senior BJP leaders in pushing it. AAP has successfully turned religion into a jan dharma of serving the people with its actions. But in public chants and rants, it countered Jai Shri Ram with Jai Bajrangbali, using the image of Ram’s servitor Hanuman. This is what the Congress did with the temple run of the Gandhi scions and Trinamool Congress chief Mamata Banerjee did with her Jai Maa Kali slogans  during the Lok Sabha. India had so far reconciled itself to a secular public life where ritualism was lived as a daily habit rather than an exhibitionist practice. The BJP has managed to overturn this paradigm, equating the dressing down of religion to disowning it as a shame, opening up the Hindu pantheon to appropriation by various parties. Insidiously, the BJP has buttonholed majoritarian liberalism and forced it to display some sort of identity on its sleeves. The political parties have no choice now but to play by the rules of this game. Religion, tragically, is now the domain of tactical warfare. Why would the BJP give it up? Third, by establishing religion as a key marker of political play, it has exiled secularism and Constitutional values to the domain and responsibility of civil society. This separation is significant. For we may rave and rant about the BJP’s socio-cultural pollutants, stage protests and sit-ins but there’s no political space for civil movements. These work up a bigger pressure no doubt and may effect a change in the long-term but in five-year timelines of electoral politics, that discourse will be cautiously side-stepped by each political party in campaign duels with the BJP. In that sense, the latter has coopted all parties into developing campaign strategies on its terms, herding them into Centre-Right positions.

How then will the BJP relook its strategies or the Opposition reorient itself in such a scenario, in Bihar and Bengal, particularly the latter as it is still the most feisty vanguard against its divisive politics and a liberal bastion? Bihar has a 17 per cent Muslim population but the BJP ally and Janata Dal (United) chief Nitish Kumar is compromised by circumstance, unable to snap his symbiotic link so close to the State polls. He is supporting CAA and knows the Muslim vote consolidates around Lalu Prasad’s Rashtriya Janata Dal (RJD). Even then he has 45 per cent of the State’s vote pie comprising extremely backward castes (EBCs), the Mahadalits and women. Besides, he has a legacy of governance that is difficult to overlook for the BJP, which doesn’t have a saleable face. Post the Delhi verdict, the BJP could attempt to find a Shaheen Bagh-like metaphor in protests at Gaya but wouldn’t want to overplay it given Nitish’s deep discomfort over profiling-based policies. It is in Bengal though that the BJP may play hard, considering Mamata has stuck her neck out stridently against the otherisation of the minorities. Besides, Bengal has a sizeable 27 per cent Muslim votepie against which the BJP will look to consolidate every Hindu vote. The anxieties of Partition are latent in Bengal and the BJP will be looking at playing up the subterranean memory by hook or by crook. Besides, as a border State that has suffered infiltration and where refugees have been regularised as votebanks, the fear of the Muslims has worked. In the developing two-party matrix at the State level, the minuscule CPI(M) and Congress vote has already migrated to the BJP, shoring up its percentage as a key Opposition player. Mamata, like Kejriwal, has learnt her lessons in realpolitik but the question is how fiery a tigress she chooses to become. The BJP for sure is luring her.