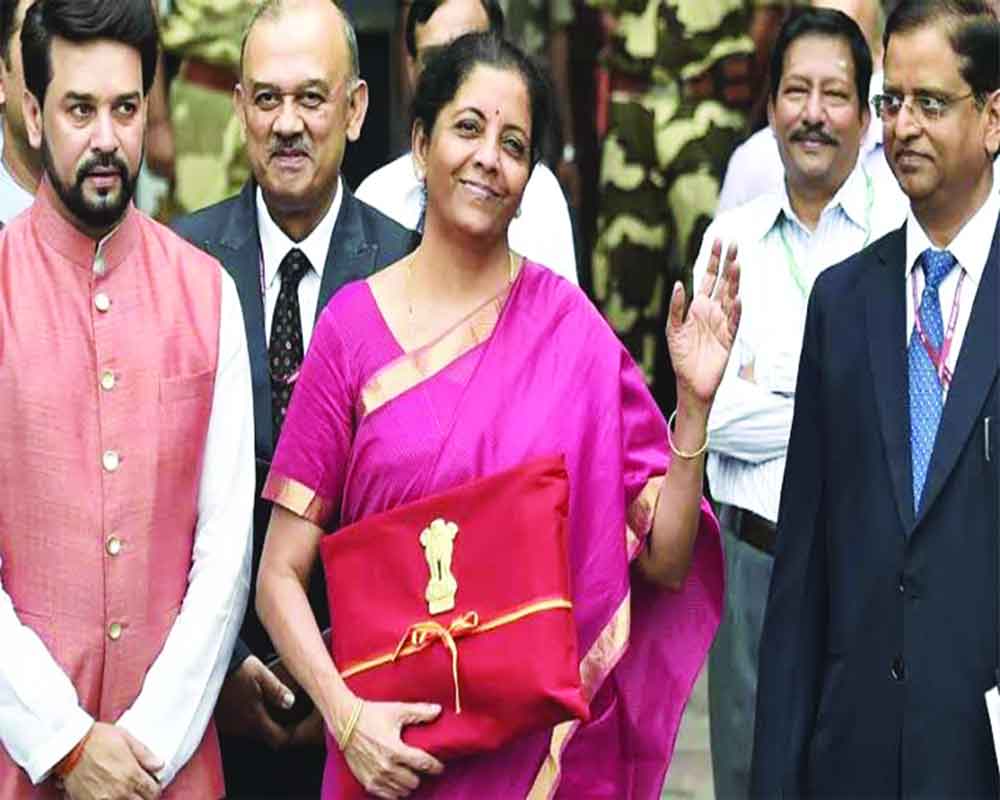 The economic turmoil that India is currently going through is unprecedented. The performance of Modi 2.0 has been below par on various fiscal indicators. Rising unemployment, industry-specific pangs, reduced demand, falling industrial output, higher inflation and lower-than-expected tax collections are a few areas of concern. As Finance Minister (FM) Nirmala Sitharaman gears up to present the Union Budget 2020 on February 1, it is expected that she would try her best to accelerate the Gross Domestic Product (GDP) growth which is estimated at five per cent for 2019-20, the lowest of the decade. Sitharaman would be presenting her second Union Budget at a time when the industry’s expectations from it would be somewhat high considering the slowdown in various sectors, though the Government took necessary steps last year to shore up the economy through stimulus packages, including the slashing of the corporate tax. However, the Government’s move to slash corporate tax has raised the hopes and expectations of the salaried class for a similar relief in income tax. While the middle class wants the Modi Government to provide income tax relief, the FM has very little fiscal room to dole out such largesse and this makes the Union Budget 2020 very interesting. The general expectations for the Union Budget 2020 are as follows.

Reduction in individual income tax rates: In the Interim Budget, presented in February 2019, income tax relief was provided that primarily benefitted individuals with an annual income below Rs 5 lakh. In another sop for the salaried class, the standard deduction of Rs 40,000, which was introduced in the Union Budget 2018, was raised by Rs  10,000 to Rs 50,000 per year. But last year we had the economic slowdown brought on by the weakness in demand. Therefore, to create demand the Government may reduce income tax rates and may create some more sub-slabs in the current slabs. For example, the current tax rate is 20 per cent for a slab of Rs 5 lakh to Rs 10 lakh. This could be reduced to 10 per cent and a further new slab, say for example Rs 10 lakh to Rs 20 lakh, could be created with a 20 per cent tax rate.

Increase in deduction under Section 80C: At present, the deduction under Section 80C is available up to Rs 1,50,000 and eligible investments include life insurance policies, Public Provident Fund (PPF), National Savings Certificate (NSC), five-year notified tax-saving bank deposits, three-year Equity Linked Saving Schemes (ELSS) mutual funds, repayment of housing loan, tuition fee and many more. One can put the entire Rs 1,50,000 in one investment or in more than one instrument. Practically, the overall limit of  Rs 1,50,000 does not offer any major benefit in real terms, as various investments are clubbed under one single provision. With an increase in the inflation rate, there is a need for an increase in the threshold limit of the Section 80C deduction, too. It is recommended that this deduction should be increased to a minimum of Rs 2 lakh or even Rs 2.5 lakh. Thus, if the threshold limit of Section 80C is increased by the FM in the Budget, this will not only boost investments, but also provide a majority of taxpayers the much-needed relief.

Infrastructure Bonds: The Government is tight on funds and needs money to finance the country’s infrastructure, so it may consider reintroduction of Infrastructure Bonds. These bonds were good for people who need a fixed income. This investment was over and above the investment limit under Section 80C. They offered a decent rate of interest and tax benefits. The maturity of these bonds is often between 10 to 15 years with an option to buy back after a lock-in of five years.

Debt-linked saving schemes: The Association of Mutual Funds in India (AMFI) had last year requested for introduction of debt-linked tax saving schemes or DLSS similar to Equity Linked Savings Schemes (ELSS). The basic argument for introduction of DLSS is that many conservative people do not invest in ELSS to claim tax deductions under Section 80C of the Income Tax Act because they are scared of putting money in stocks. The industry believes that these people would happily invest in a debt scheme like DLSS to save taxes under Section 80C. The mandatory lock-in period in these schemes can be five years like tax saving bank deposits.

Direct Tax Amnesty Scheme: The Government, which is hard-pressed for revenue, may come up with a Direct Tax Amnesty Scheme (DTAS) in this Budget. Last year they announced Sabka Vishwas (Legacy Dispute Resolution) Scheme, 2019 for Indirect Taxes through which the Government collected more than Rs 35,000 crore. Direct tax collection is facing a severe shortfall in the current fiscal year. After refunds, it saw a growth rate of 0.7 per cent till December 15, 2019 against the Budget target of 17.3 per cent. Advance tax collection after the third instalment stood at Rs 2.51 trillion, compared with Rs 2.47 trillion in the corresponding period last year, posing a 1.6 per cent growth.

DTAS may allow assessees to declare the additional income of the previous five-six years without penalty or prosecution. The proposal, being examined, will allow assessees to revise declared income with no fear of past cases being opened up, or prosecution. It will help improve compliance, besides raking in revenues for the Government. People who want to declare more income from the previous year do not do so because the moment they do, they are taken up for scrutiny, investigation and prosecution and penalties are imposed upon them. This scheme will also help in prevention of litigation. In August last year, the Government increased thresholds for tax litigation, below which the I-T Department was directed not to file appeals and withdraw cases that related to the ones under those. The limits were revised from Rs 20 lakh to Rs 50 lakh for appeals before the tribunal, from Rs 50 lakh to Rs 1 crore for appeals before High Courts and from Rs 1 crore to Rs 2 crore for appeals before the Supreme Court. A large number of pending appeals have been withdrawn/dismissed following the order.

Setting up of a Development Finance Institution: The Government may announce the setting up of a Development Finance Institution (DFI) in this Budget. This could be created to cater to core sector project financing. India is going through the rarest of rare economic conditions where economists — who often call for fiscal prudence over anything else during the Budget season — have become more realistic, conceding that there is a need to breach the fiscal deficit target. The DFI could be one of the triggers where the FM would take a decision, even breaching the fiscal deficit target. To improve sentiments and growth, India is in dire need of infrastructure spending. But for the Government, which is in the process of generating revenues through disinvestment of various PSUs including Air India, BPCL, CONCOR, the SCI and so on, any commitment to such projects would be considered to be an audacious act.

Micro irrigation funds: In 2017, then Finance Minister Arun Jaitley announced a dedicated Micro Irrigation Fund with NABARD under the Pradhan Mantri Krishi Sinchayee Yojana. The objective of the fund was to achieve the goal of “per drop more crop.” A whopping Rs 5,000 crore was sanctioned for this in 2018. Considering climate change, which has led to drought in some areas and floods in others, a new corpus would be allocated to this scheme in the forthcoming Budget.

This year’s Union Budget comes with more expectations than ever because of socio-economic conditions. For the first time the FM has the leeway to breach fiscal deficits and come up with real reforms, both for taxation and the economy, but the challenge is whether the Government is ready for such action.