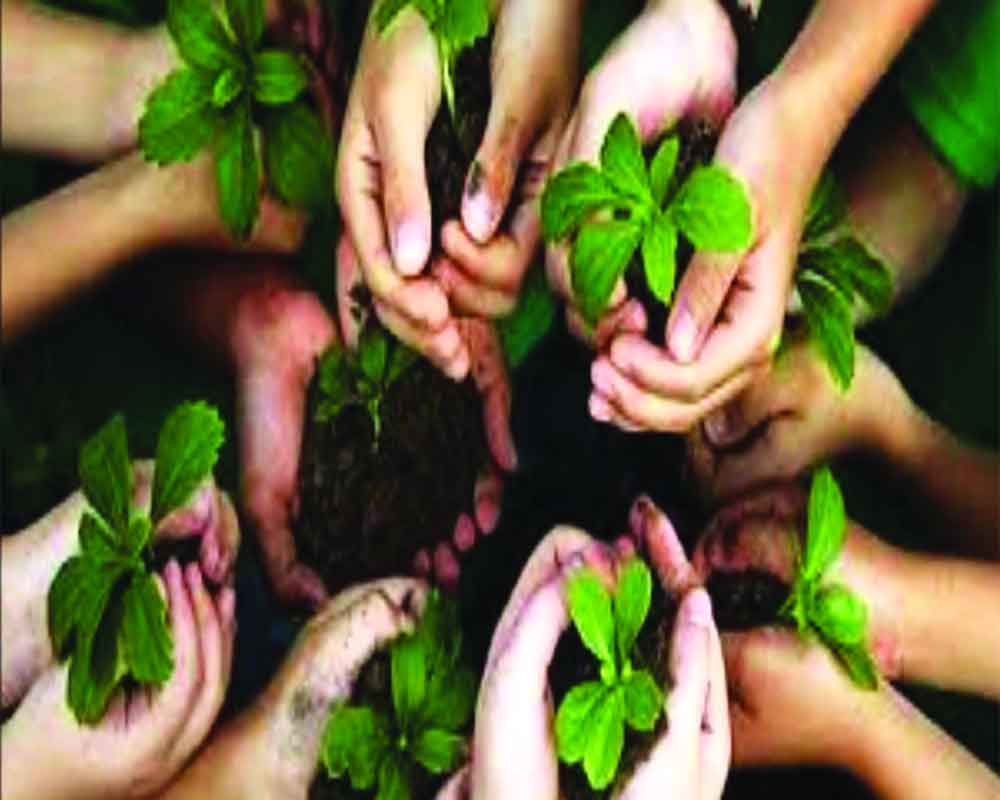 Each of us has to embrace biodiversity-based products in our lives. Not only will they be an economical option but also the healthier one

There is no better day than the International Biological Diversity Day to remember that we are a part of nature, not separate from it. Ancient seers of India described this relationship as Vasudeva Kutumbakham (one universal family) that supports and sustains each other, right from the humble earthworm to the mighty elephant. We learnt over our 10,000-year civilisational history, lessons from  planetary consciousness and celebrated the inter-dependence of all life and our role as stewards and children of Mother Nature.

Our ancestors toiled for centuries so that we could be the beneficiaries of diverse, climate-resilient and nutritious seeds. As a result, India today has the largest diversity of plants and foods and the country alone accounted for over 2,00,000 varieties of rice. We honoured seeds, right from barley to millet, with sacred rituals, for filling our stomachs and bestowing upon us health. We pray to nine goddesses during Navratri and offer them each a sacred seed. From birth to death, our biodiversity is conserved in our rituals.

In many communities in India, brides still carry to their husband’s home the gifts of native seeds and sacred spices like turmeric and so on. All communities across India, but more particularly tribals, have forms of biodiversity entwined with their daily lives and sacred rituals. In fact, sugarcane in Sanskrit is “ikshu” and the dynasty of the mythological King Ram was Ikshvaku. Isn’t this an uncanny coincidence?

The animal family was not left out either, we sanctified them as companions or steeds of gods and goddesses. Even the most hated pest, the rat, is associated with Lord Ganesh. The sub-continental civilisation saw beyond the anthropocentric myopia and valued each being as sacred, for each one of them contributed to the larger wheel of life.  But sadly, these were  just “pagan rituals or superstitions” for the officers of the East India Company. With the mighty gunboat and lust for gold, the colonist birthed a class of compradors, who focussed on the reversal of our ancient ways of life.

They infected us with a virus — the conquest of nature, which was contradictory not just to the Indian way of life but to all civilisations across the world (including the pagan traditions of Europe, which were repressed during the Great Inquisition in medieval Europe).

Right from the native tribes of the Americas to the Chinese, all affirmed that human life is a sub-part of nature. And with the age of imperialism began the great fall from Eden into desperate hell of pillaging, looting and rape of the Earth and all her living beings for the profit of the great pirate overlords.

But is the conquest of nature over? No, the conquest has evolved. Instead of the East India Company, we have India Inc. and larger behemoth agri-giants that survive on the plunder of the Earth and on bio-piracy.  India, the land of abundance and diversity, is losing its true wealth — our connection with our biodiversity, our seeds, our medicinal plants and the genetic diversity of our animals.

For instance, from the Gir to Ongal cows, we have destroyed our cattle wealth with artificial insemination and sacrificed the Nandi bull to the tractor. We have made oxen redundant in our system of agriculture.

The diversity of the thali, too, has shrivelled to a handful of crops and sub-varieties of fruits, cereals and vegetables. Millets and local varieties have disappeared from our diet and have been replaced by commercial varieties, while our fields have become a eulogy to monoculture cropping. It had taken thousands of years to evolve each variety and crop and yet in little less than 50 years, we have destroyed generations of breeding.

But at the national level, there are greater threats. Indian Plant Genetic Resources (PGR), rated among the highest in the world, are being pirated abroad. Sometimes due to laxity of enforcers and other times illegally. Nevertheless treaties like The International Treaty on Plant Genetic Resources for Food and Agriculture (ITPGRFA) and International Union for the Protection of New Varieties of Plants (UPOV) are trying to bully India into surrendering all our PGR for corporate exploitation, while receiving minimal remuneration and benefits for the communities that have co-evolved these plants and seeds. There is also an attempt to subvert our Biodiversity Act and undermine the National Biodiversity Authority.

We need to have a more nationalistic Foreign Direct Investment policy especially dealing with our PGR as it is a treasure trove that will prepare us to face challenges such as climate change.

The next policy step to conserve diversity is to have a strong protection of farmers’ rights to breed and co-evolve newer varieties. As the theme  “Our Solutions are in Nature”, suggests, we must also harness the wild varieties and land races for meeting newer challenges. But this should be done sustainably, involving local communities and farmers instead of patented technological alternatives, which are expensive and promote profiteering.

MS Swaminathan, father of the Green Revolution in India, many times stressed on how the country’s biodiversity has the potential to meet all of our needs, we don’t need gene modifications or other genome editing interventions like CRISPR and so on. We must look towards nature and her abundance for solutions.

Each of us has to embrace biodiversity-based products in our lives. Not only will it be an economical option but also the healthier one. Starting from our plate, we can all include one millet meal or local varieties of rice/wheat apart from basmati, and trust me, there are hundreds of aromatic, medicinal and tasty varieties available in each city and village. This will increase the biodiversity of our gut and improve health.

We need to also bring back local native vegetables and prefer seasonal and locally-grown greens over cold storage ones. For processed foods, we again must buy as much as we can of biodiversity- based products and support native tribes. For our clothes, too, we need to end the hegemony of Bt Cotton. It is about time that Indians, like other more conscious citizens, choose cheaper alternate fabrics and support handloom and sustainable clothings collectives.

In dealing with other challenges, we must involve processes such as bio-mimicry and evolve technologies that work with the Earth and not against her.  Circular and non-polluting economical policies are the need of the hour.

Finally,  each thing we eat, touch, feel are all transformed nature so we need to reject the false separation from nature. The problems and solutions are both part of nature. What we understand as problems are so because they risk human survival but may not bother nature so much.

The true solution lies in awareness. We need to embrace our Vasudeva Kutumbhakam and bring back biodiversity and sacredness into our lives. We need to dispel war-mongering against nature for profit and embrace the abundance she provides. We ought to change our behaviour and our language (which treats nature as dead and an object). We need to remove the “it” to denote nature and replace it with  “her” as the goddess she truly is.

(The writer is Director, Policy and Outreach, National Seed Association of India)