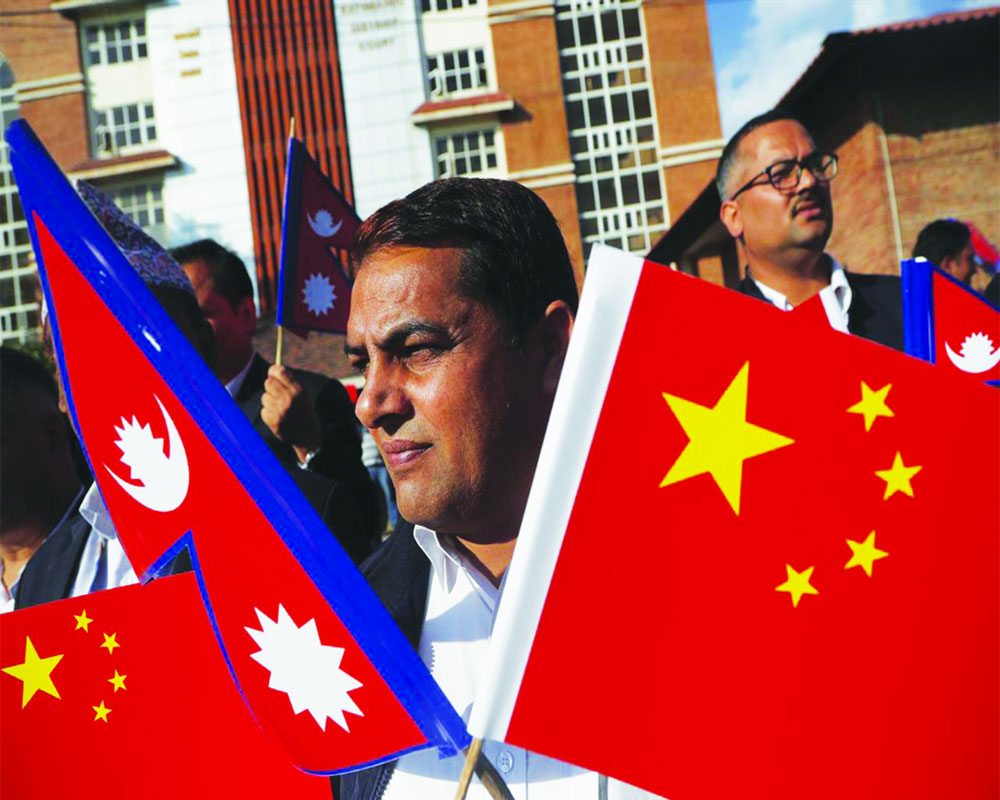 For Nepal, balancing India and China is challenging; expecting it to also balance America and Beijing would be walking a tightrope. For India, regaining space lost to China will be a long haul

I go to Nepal twice a year. Once during Holi and the other on Tihar (Nepali bhai dooj) that comes after Dussehra. The normal format is: Fly to Kathmandu, spend two to three days there, then fly to Pokhara for a two-week trek and then revival. The pre-Holi Kathmandu weather this year was a spoilsport — cold, bleak and rainy — amid the Corona scare, though Nepal had registered just one case and that figure remains intact even today. Just this week, Nepal went into total lockdown till March 31. One-third of its population of 30 million people works abroad, mainly in the Middle East, South-east Asia and India. Their earnings account for nearly one-third of its gross domestic product (GDP) of $35 million.

Many Nepalese wear face masks throughout the year in Kathmandu and elsewhere due to garbage and pollution. Everything appeared normal at the Tribhuvan International Airport, including the temperature gun aimed at people. The country has for the moment cancelled its inaugural Sagarmatha Sambad, a three-day conference on climate change, which Foreign Minister Pradeep Gyawali said would be postponed to October. He also said he was pleased with India-Nepal relations now that the Foreign Secretary-level Kalapani dialogue is about to start shortly and the Eminent Persons Group (EPG) report appeared on the horizon.

My lecture at Nepal’s Institute for International Cooperation and Engagement on a holiday (Saturday, March 6) was well-received. It was preceded by a presentation on the Coronavirus and the world economy. The theme of my presentation was: “India-Nepal Relations: Mind the Gap — Where China Fits in.” The Kathmandu Post, the capital’s leading English newspaper, was recently stung by a stern rebuke by the Chinese Embassy for reproducing a syndicated column on Coronavirus by a former US Ambassador, who was critical of China. While this intrusion was condemned by the Nepalese media, not a word was said by the Prime Minister KP Oli-led Government.

During the royal rule, the Chinese used to say that they do not interfere in the internal affairs of the host Government. This is now a thing of the past. That the Chinese assault on freedoms guaranteed by the Nepalese Constitution went officially unresponded was not surprising. Any similar affront by India would have attracted loud and collective protests by the media and the ruling Nepal Communist Party (NCP), which is inarguably pro-China. Clive Hamilton’s Silent Invasion: China’s Influence in Australia and Jonathan Manthorpe’s Claws of the Panda: Beijing’s Campaign of Influence and Intimidation in Canada are books reflecting on China’s global outreach and blatant intrusions.

Like in the rest of the world, politics is on long pause in Nepal. Reason: Oli’s health and the spread of Coronavirus. The main topic of discussion after Oli received his second kidney replacement is his political rejuvenation. Unless his health deteriorates, rendering him dysfunctional, he will continue to lead the country by remote control. Fortunately, the Coronavirus epidemic appears controlled for now and life goes on happily without fear or scare throughout Nepal.

I arrived in Pokhara a day before Holi on an Air Buddha flight, which took all of 25 minutes. The only BMW in Pokhara, belonging to Nepali Congress’ Buddhiman Gurung, drove me to Lameahal, 15 km east of Pokhara. Holi is celebrated on the 6,000 ft high newly-built Manithan temple at An Phu village, where the bhale (male chicken) or boka (male goat) are sacrificed till the brown hilltop turns red. The pujari (priest) has to first persuade bhale and boka to accept becoming the sacrificial offering before their beheading by the khukuri-wielding priest. Side by side, dry colours mix freely with local dance and drinks as tribal Gurungs bring out their best. From Lameahal, one has to cross the Seti river on a swing bridge, climbing about two hours to reach An Phu top, which makes for a healthy

Meanwhile, with regime change in the Oli-led NCP unlikely till next elections in 2023, it is the latent power struggle between Oli and party president Pushpa Kamal Dahal Prachanda that is making the gossip. Given Oli’s uncertain health, Prachanda has played his cards cleverly to ensure that sooner than later, the power hierarchy in Kathmandu could look like this: Madhav Kumar Nepal, former Nepal Prime Minister, Jhalanath Khanal, the President of Nepal, and Prachanda, the undisputed president of the party. The opposition Nepali Congress in Nepal, like Indian National Congress, is on a decline. Nepali Congress (NC), which was split into three factions — SB Deuba, RC Poudyal and KP Sitaulla — has two additional wings: The Koirala legacy and Ganesh Man Singh groups. Both NCP and NC will have their first and 14th general conventions in 2021.

While in NC, Deuba remains the top leader, other parties have opted for joint or collective leadership to avoid infighting. For example, the royalist Rashtriya Prajatantra Party, which merged recently, has three presidents. The Rashtriya Janata Party (RJP)  has a six-member presidium led by Mahanta Thakur. The Samajwadi Party (SP) has a triumvirate leadership — former Prime Minister Baburam Bhattarai, Upendra Yadav and Ashok Rai. The RJP and SP, who together rule number two  province, are considering merger after unification talks. They have been pressing the Oli Government to amend the Constitution, incorporating pending issues of the Madhesis, janjatis and marginalised communities.

Two years on, the Opposition parties are complaining that the ruling NCP is besieged by scandals — gold, wide-bodied aircraft, NCell and a close aide of Oli, Banskota — and misgovernance but have no alternate vision plan to offer. While China will ensure the NCP stays united and the Government does not fall, India is loath to being seen as having favourites or indulging in regime change. The Government is seized with matters like the US-sponsored Millennium Challenge Corporation (MCC) and the Indo-Pacific, which are seen as means of challenging China’s Belt and Road Initiative (BRI) and containing it. Die-hard communist members of NCP are unwilling to countenance this. For Nepal, balancing India and China is challenging enough; expecting it to also balance the US and China would be walking a tightrope.

For India, regaining space lost to China will be a long haul. In the meantime, it can invest in improving its declined image, damaged by the blockade of 2015, which gave rise to anti-Indianism and fillip to China. It has chosen a competent and promising Ambassador, Vinay Kwatra, for the job. On March 18, when I was at Pokhara airport bound for New Delhi, one of my Nepalese friends made this irresistible offer: “Mehtaji, why don’t you stay in Lameahal till the Coronavirus dries up?” Back in Noida, I am confined to Ram Vihar instead of climbing to An Phu top and breathing a daily dose of crisp Himalayan air.