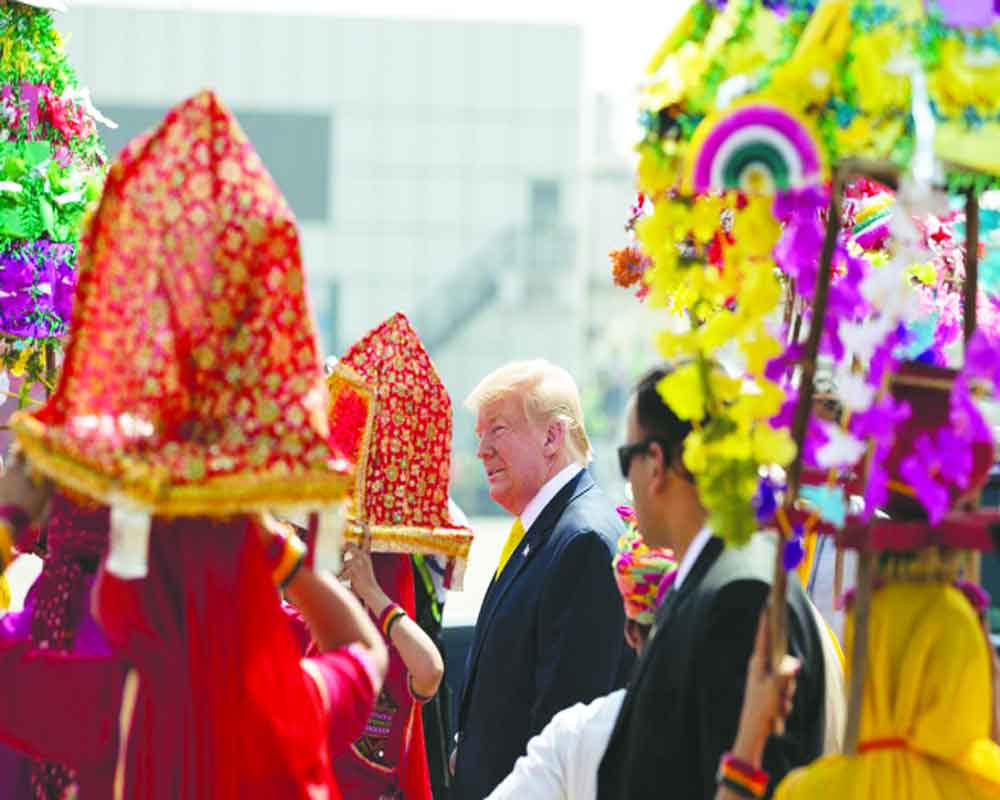 Though no major pacts were signed between the US and India, advancements were made in the important areas of defence, energy and partnership in the Indo-Pacific

Riding on the back of greater people-to-people connect, public opinion has had an increasingly critical role in shaping India-US relations, at least in the last two decades. Opinion ratings and endorsements of US President Donald Trump have reached an unprecedented high among the people in India, says a recent survey by Pew Research. This positive view of Trump surfaced most palpably during his recently-concluded visit to India. The spectacle in Motera stadium, the cultural symbolism of Mahatma Gandhi and the presidential welcome in New Delhi, all generated favourable public opinion for Indo-US relations.

On the face of it, Trump’s visit did not score very high as no major or new agreement was signed between the two countries — except for the $3 billion defence deal which is a small amount in the overall bilateral trade between the two countries. However, if we look beyond the surface, perhaps his visit served exactly the purpose it was intended to.

One of the most important developments signalling progress in bilateral relations was the elevation of ties to a Comprehensive Global Strategic Partnership. Technically, it signifies a step forward in the already existing alliance between the two countries, albeit in a broader spectrum of cooperation and, perhaps, with globally-shared responsibilities.

In so far as concrete deliverables are concerned, advancements were made in three important areas; defence, energy and partnership in the Indo-Pacific. In the defence sector alone, the last three years have resulted in $70 billion worth of deals in bilateral defence aviation and technology sectors. During the visit, Trump finalised deals worth over $3.5 billion for six Apache attack helicopters worth $930 million and 24 Seahawk/Romeo helicopters worth $2.6 billion. India and the US also discussed the $1.9 billion deal for a missile defence system that would protect the Capital.

However, the bonhomie between the two leaders and the spectacle surrounding Trump’s visit overshadowed any sense of lost opportunity. On the trade front, although both sides showed confidence that an impending mega deal benefiting both the countries is around the corner, trade negotiations are not going to be easy. In fact, some of the steps from the US have signalled a hard negotiating position on trade — one that presses for greater market access in various sectors without reinstating our Generalised System of Preferences (GSP) status. The US also removed India from the list of developing nations that are exempt from investigations on whether they harm the American industry with unfairly-subsidised exports.

Besides, the US Trade Representative Robert Lighthizer cancelled his visit to India due to unresolved differences between the two sides. What may have persuaded the Trump administration to persist with the trade talks is the rapidly-shrinking trade deficit with India, especially with rising energy imports. As such, the once $30 billion trade surplus of India has shrunk to $16 billion, thanks to its increasing energy imports from the US in recent times.

Besides, the energy sector is coming up as one of the most important areas of cooperation between the US and India and in the last four years, bilateral energy trade has risen to $20 billion. During Trump’s visit, ExxonMobil signed a deal to improve India’s natural gas distribution network so that the US can export even more Liquefied Natural Gas (LNG) to us. In the likely absence of any concrete trade deal, there are primarily two areas on which the bulk of the performance weight of the bilateral relations would rest: Defence cooperation and regional order in the Indo-Pacific, which received a thrust during Trump’s visit to India. More importantly, the defence deals have a practical significance for the Indo-Pacific region and are mutually reinforcing, given India’s security considerations in the region.

The 24 MH-60R Seahawk maritime helicopters by US-based Lockheed Martin are one of the best naval choppers today with anti-submarine capabilities, a feature that is expected to give more strategic depth in the Indo-Pacific to the Indian Navy. These helicopters can also be used for other purposes like anti-surface warfare and search and rescue operations.

The six Apaches, armed with Stinger air-to-air missiles, Hellfire Longbow air-to-ground missiles, guns and rockets are likely to pack considerable air power for the Indian Army. In the defence sector, India and the US also agreed to work towards an early conclusion of the fourth and final bilateral foundational military pact called the Basic Exchange and Cooperation Agreement for Geo-Spatial Cooperation.

Furthering cooperation with India in the domain of the Indo-Pacific was a definitive plan of the Trump administration. This was depicted by the Blue Dot network push by him to rope India into the effort to “guarantee that the infrastructure of the future is built in a safe, transparent and accountable manner” in the Indo-Pacific region. Since countries like Australia and Japan are already partners to the Blue Dot network, India’s participation will further consolidate multilateral stakes there from a rules-based order perspective.

The Blue Dot network is intended to ensure that countries around the world  have access to private sector-led, sustainable and trustworthy options for high-quality infrastructure development. India and the US will look to consolidate the common views of a free, open and inclusive Indo-Pacific through this network. Convergences between the two nations are likely to grow, especially in the aftermath of the Raisina Dialogue 2020, where the US declared an expansive view of its Indo-Pacific strategy and included the Gulf in its vision for the region, which was hitherto excluded.

With China hit by an epidemic of unprecedented proportions, the consequences of which are yet to be assessed, the timing of Trump’s visit could be significant for the advancement of US-India combined views on the emerging Asian order. Trump’s visit was an important opportunity for both sides to take concrete steps in advancing the idea of the Indo-Pacific. While the Blue Dot network is an opportunity for India to embrace it, we need more clarity on its role in advancing the economic corridor as part of the regionally-envisaged connectivity vision.

The other critical issue to come up during Trump’s visit was the purpose and nature of the Quad partnership at the level of top leadership. These discussions were a natural follow-up after all four countries met at the ministerial level for the first time in a “significant elevation” of the dialogue advance cooperation in the Indo-Pacific region in September 2019. With Australia’s inclusion in the Malabar naval exercises around the corner, it is only imperative that the two largest powers in the  region, which are counterpoised to China, consolidate on this combined regional security architecture.

On global issues, while the issue of terrorism stuck out, a backchannel talk on Afghanistan found its place in the bilateral agenda. The internal situation in Afghanistan is at the cusp of a transformation with a US-Taliban deal likely to be signed in a matter of days. It is no secret that Trump wants India to play a larger role in Afghanistan’s security. With the recent announcement of the official results of the Afghan elections and the return of the Ghani Government in Kabul, a party which India recognises, New Delhi’s support “to do more” may have been underscored yet again by Trump.

The US might be aware that Afghanistan’s National Security Advisor Hamdullah Mohib, who was in New Delhi in January, asked India to consider deploying its troops in Afghanistan in a peacekeeping role. While Prime Minister Modi may have conveyed India’s concerns over the US deal with Afghanistan, such concerns may have been diluted by the US’ counter-concerns on Kashmir, New Delhi’s controversial domestic legislations and the violence in parts of the Capital, even as Trump was in Delhi.