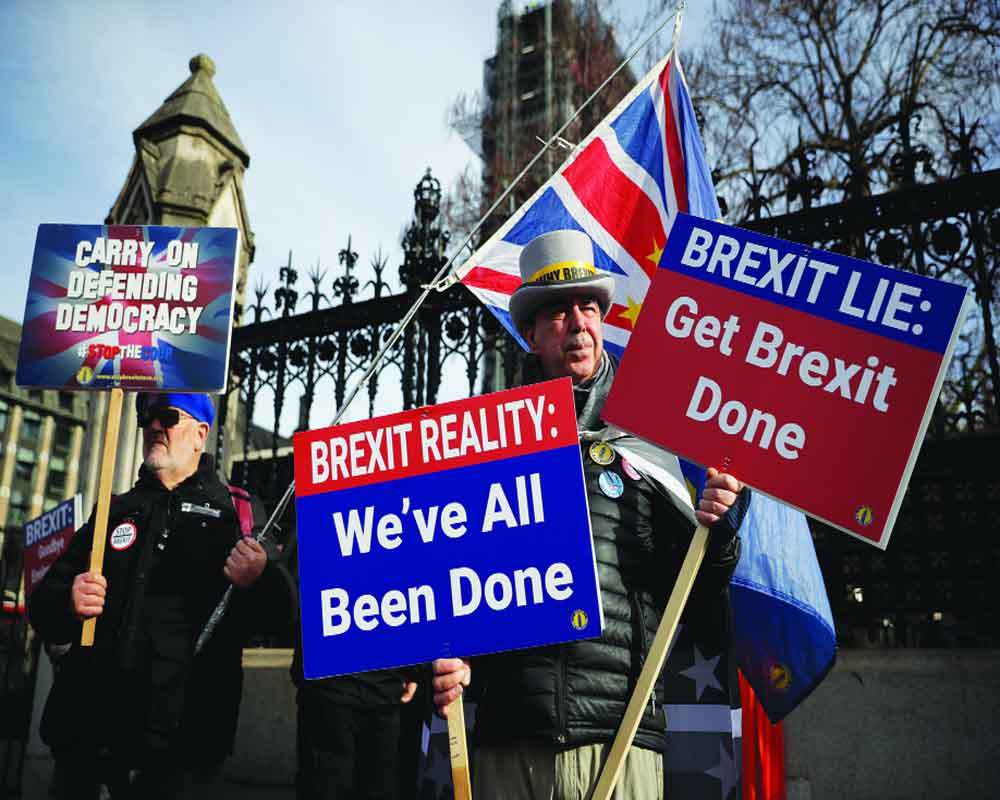 Though Brexit is finally done, Johnson has to stick to the transition period that he has agreed in the withdrawal pact. Precisely speaking, it is too little time for a complete withdrawal from the EU. For all these, the rest of the 27 members of the EU have to come together and the UK must cooperate with them

Brexit is finally done. At the end of January this year, the British Prime Minister, Boris Johnson, signed the agreement for country’s withdrawal from the European Union (EU).This has taken the country to the path of a full Brexit for which people have been waiting for more than three years. Johnson hailed this as a “fantastic moment” for Britain. While releasing the exit agreement, he said, “We can now move forward as one country… with a government focused upon delivering better public services, greater opportunity and  unleashing the potential of every corner of our brilliant United Kingdom, while building a strong new relationship with the EU as friends and sovereign equals.”

Queen Elizabeth duly gave her approval for the agreement. Hence, starting from the floor of Parliament to the court of the royalty, Johnson has received a clear “go ahead” for the Brexit. This signals that Britain is on the road to build a new future, with a new identity. It’s all about asserting its sovereignty in a unique manner.

With the UK finally leaving the EU on January 31, the country has now entered an 11-month transition period with the EU. During this entire period, the country effectively remains within the legal ambit of the Union. Hence, it has to follow the rules of the customs union, single market and rest of the organisations of the EU. But strikingly, the UK is no more a part of the political institutions of the EU.

However, since the Britons’ vote to exit the EU in June 2016, the nation has continued to defy the gloom and doom predicted by the Remainers. But the moot point is why Brexit is good for Britain. Simply speaking, Britain will be able to assert its control over its borders again. It does not need to bother Brussels again and again. But then deserting the Union may put pressure on Britain to identify and set a new relationship with all its members. And many of these members may not cooperate the way it did in the past during its membership to the EU.

After the withdrawal agreement, the first priority for Johnson was to ink a pragmatic trade deal with the EU. This is because, he wants as much access as possible for the UK goods and services to the EU market. Otherwise, this will have a negative impact both on the commoners and the trading community across the country. But this time, the current British Government has underlined the fact that the country must leave the customs union, single market and the European Court of Justice (ECJ). In fact, leaving the ECJ would eventually mean putting an end to overall jurisdiction of the court over Britain.

Meanwhile, Johnson has set his vision for a trade deal with the EU. While doing this he has underlined the fact that there is no need for the UK to follow the rules set by Brussels regime. What he wants is a Canada-style free-trade deal with the EU. Or else Britain will get back to the withdrawal agreement. But the EU officials highlight such a deal as very ambitious one for which a level playing field is required. Around the same time, the Labour Party is putting pressure on the government and saying that Johnson’s ideology has trumped common sense. Further, Labour leader Jeremy Corbyn said that the PM risked trade and investment if he kept undermining collective agreements. But then the Opposition is missing the very vital point that only to come out of the stranglehold of the EU, the Brexit is done. Its only purpose is to stay out of tentacles of the Brussels and save the country as much as possible from the collective burdens of the Union. The existing EU-Canada deal, the import tariffs of most of the goods have been eliminated between the two. But customs and VAT checks are applicable to these goods. When it comes to flow of services such as banking, it is restricted between Canada and the EU. But it is very crucial for the UK. Johnson is also indicating that he might revert his country to the WTO terms if the EU leaders refuse to offer a Canada-style framework. So for him, “The choice is emphatically not ‘deal or no deal’. The question is whether we agree a trading relationship with the EU comparable to Canada’s — or more like Australia’s. In either case, I have no doubt that Britain will prosper mightily.”

His confidence is well placed. Equally he must be aware of the fallout of the exit from the Union after decades of bonding. Political gimmicks are fine. While encountering reality, Johnson’s high-handed style may irk many, including the ones who voted him to power after leaving the labour camp.

What happens next will certainly be evoking more interest and controversy in the years to come. Many critics feel that Britain leaving the EU may encourage some other nations to follow suit. And this can happen through specific referendums of their own to safeguard particular interests and demands. Else some countries within the EU may ask for tailor-made deals of their own. That is how the future of the union might be affected.

However, untangling from the EU would be a long and arduous process. When pro-Brexiteers are talking tough on the migration from other EU member countries, they must note the fact that nearly 1.2 million Brits are also working in other member nations who might face a number of hassles. Leaving behind the EU and making a new road map is difficult. Apart from issues related to migration, following the EU rules and directives in regard to competition policies, subsidies, social protection and the environment may create trouble for the UK.

Though the Brexit is finally done, Johnson has to stick to the transition period that he has underlined in the withdrawal agreement. Precisely speaking, it is too little time for a complete withdrawal from the EU. For all these, the rest of the 27 members of the Union have to come together and the UK must cooperate with them.