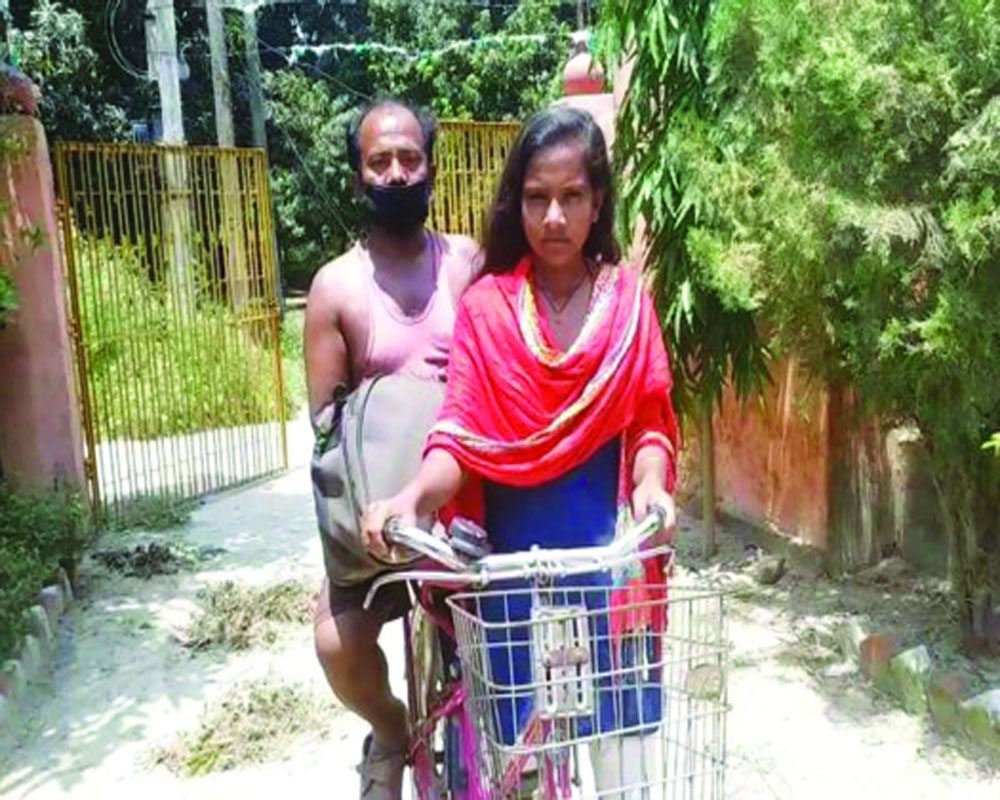 Desperation drove 15-year-old Jyoti Kumari to pedal 1,200 km to Bihar with her father. She is now up for cycling trials

If the pandemic has shown our ugly side, with a rampant class divide apparent in decisions taken by the Government vis-à-vis the lesser privileged, namely migrants, it has also revealed the true grit of survivors. People are walking thousands of kilometres in their long march home, helping and supporting each other along the way. One among them is a young girl, Jyoti Kumari, who set out on a 1,200-km journey back to Bihar on her second-hand bicycle with a single mission: Bring her injured, out-of-work migrant father home. With no money and little food and thanks to generous Samaritans along the way, she pedalled on with her father on the pillion. For eight days, the father-daughter duo moved down long roads under a scathing sun and some undesirable comments by passersby. Yet undeterred, she reached her home in Bihar and has now quarantined herself. With the media hailing her as the “lionhearted” girl, the reports did not fail to draw the attention of the Cycling Federation of India. Having noticing her immense talent, it has invited her to New Delhi for a tryout with the national team. There’s much more. Her amazing journey has also grabbed the attention of Ivanka Trump, US President Donald Trump’s daughter, who took to the social media to salute what she called a “beautiful feat of endurance.” But Jyoti must not make the same mistake as Srinivas Gowda, the “kambala jockey” or Karnataka’s Usain Bolt, who, too, was invited by the Sports Authority of India to take part in a track and field trial after his record-setting performance in a traditional foot race but failed to seize the moment. Nor should she be like Rameshwar Gurjar, a farmer from Madhya Pradesh, whose fame was short-lived because he failed to prove his mettle on the ground. If passion and desperation drove her, she must keep that hunger alive for a sportswoman’s career if she indeed wants one badly enough.

She must possess the same zeal as that of sprinter Dutee Chand, boxer Mary Kom and archer Deepika Kumari among others, who, coming from tribal and marginalised backgrounds, were less magnificent than they are today. Standalone feats like that of Jyoti’s from the hinterland are also proof of talent, stamina and determination that we are somehow not able to tap into and develop as Olympic medallists. We need to put in place quality and effective grassroots rural sports development programmes uniformly across States and ensure sports nurseries are set up at the school level along with nutrition packages for the young. Imagine what Jyoti could do with a little bit of encouragement and support.