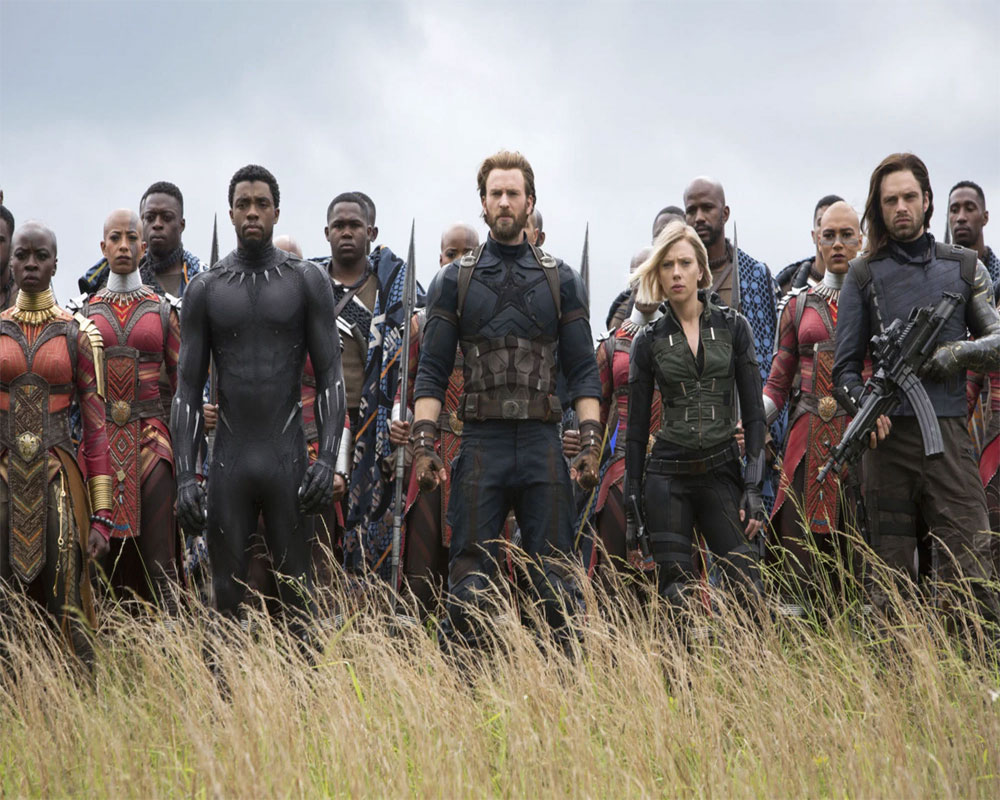 Boseman, who attained global stardom as T'Challa aka superhero Black Panther in the MCU films such as "Captain America: Civil War", "Black Panther", "Avengers: Infinity War" and "Avengers: Endgame", died Friday of colon cancer at his residence in Los Angeles with his wife and family by his side. He was 43.

The actor fought a secret battle with the disease for four years, Boseman's family said in a statement posted on his official Twitter handle on Saturday.

Before "Black Panther", Boseman made a name for himself by playing iconic black historical figures like baseball star Jackie Robinson in "42" (2013), singer-songwriter James Brown in "Get on Up" (2014) and the first African-American Supreme Court Justice Thurgood Marshall in "Marshall" (2017).

"Iron Man" star Downey Jr called Boseman a hero who "levelled the playing field" with his inspiring and deep performances while fighting for his life.

"That's heroism. I'll remember the good times, the laughter, and the way he changed the game..." he wrote on Instagram.

Boseman made history in 2018 by leading a virtually all-black cast with solo Marvel movie "Black Panther".

The Ryan Coogler-directed feature is considered a landmark film for the way it projects black identity.

Boseman played T'Challa who takes on the mantle of Black Panther after his father, T'Chaka, the king of the fictional but powerful African country Wakanda, dies in a bomb blast.

"Black Panther" was a major hit for Disney-owned Marvel Studios, grossing over USD 1.3 billion in worldwide gross and becoming the first superhero film to be nominated for the best picture at Oscars. The film took home three trophies for original score, costume design and production design.

"Chadwick was not only a deeply soulful and powerful actor, but he was such a kind, thoughtful, funny and gentle person. He brightened everyone's day every time he walked into our hair and makeup trailer or on set with his beautiful smile.

"My heart goes out to his wife and entire family for such an unimaginable loss. Our collective Marvel family is absolutely heartbroken," Johansson said in a statement obtained by The Hollywood Reporter.

Hannah Beachler, who won the best production design Oscar for "Black Panther", remembered the actor as someone who always "uplifted" people and looked out for them.

"I'd see Chad everyday, he'd go out of his way to ask me, w/ a smile 'what magical place did you make for me today?' He was always uplifting us, he was our king for that year. When I'd see him at events he'd ask, 'They taken care of you Sis?'

"He'd tell me to make sure to get what I was worth. He always looked out for us, always saw us. I'm praying for his family, and hope they find solace in knowing he's in the land of peace, he's home now. Rest In Peace young King, your light will forever shine on us!" Beachler tweeted.

"He inspired an entire generation to stand up and be king. Honor him by emulating him - show kindness and love to others. Share your talents in ways that impact. Always strive to be a light in the darkness," they said via their shared Instagram account.

Tom Holland, the current star of the Spider-Man franchise, on Instagram said Boseman was "even more of a hero off screen than on".

"A role model not only to me on set, but to millions of others around the world. You brought joy and happiness to so many and I'm proud to have been able to call you a friend. RIP Chadwick," Holland wrote alongside the late star's photo meeting children diagnosed with cancer.

Simu Liu, who is set to play first Asian lead in MCU's upcoming "Shang-Chi and the Legend of the Ten Rings", paid tributes to Boseman saying his "career rides on the coattails of a great man".

"I want to be crystal clear: without Chadwick, and what he gave to his character, there is no Shang Chi. Period. My career rides on the coattails of a great man.

"I wish I would have had the opportunity to tell him in person - but I'll fight for him always, my Eternal King," Liu tweeted.

"The world will miss his tremendous talent. God rest his soul," wrote "Guardians of the Galaxy" star Chris Pratt.

In a reference to her children, Zoe Saldana, another "Guardians" star, tweeted, "I'm gonna have to tell Cy, Bowie and Zen that T'Challa has passed. What other king can I tell them about now?"

"We lost a great one. Takoto mai ra e Ariki (which roughly translates to 'lie down, Lord' in Maori)," the New Zealander filmmaker wrote on social media.

Boseman was last seen in Spike Lee's "Da 5 Bloods", an urgent film about a group of ageing Vietnam War veterans who return to the country in search of the remains of their fallen squad leader.

His last film will be "Ma Rainey's Black Bottom".