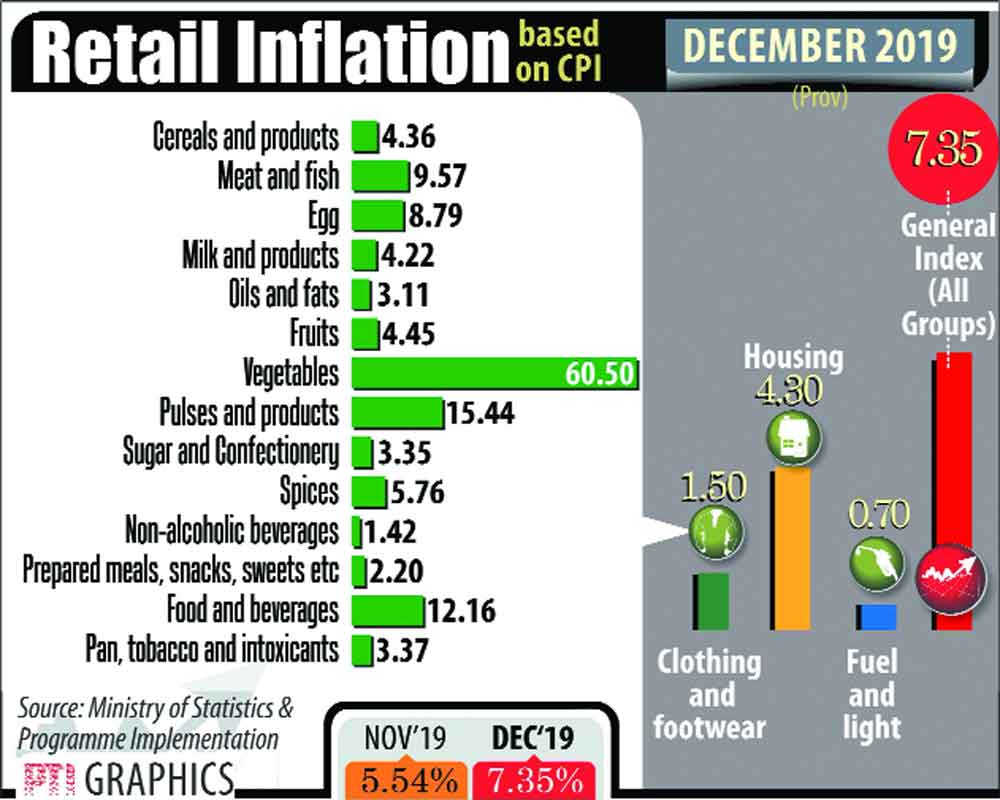 Retail inflation galloped to 66-month high of 7.35 per cent posing a new challenge to the Modi Government ahead of the Union Budget. This is second time that the inflation rate has reared its head so high since Narendra Modi took over as Prime Minister in July 2014. The previous high in retail inflation was witnessed at 7.39 per cent in July 2014.

The sharp rise in inflation means your money parked in bank fix deposit will give you negative return in majority of the saving schemes. It will also narrow down the Government’s option to bring in fiscal stimulus in the Budget to revive the sinking economy.

With fiscal deficit veering around 5.5 per cent — if the provisions for food subsidy and scheme and highway building projects (both have been taken off the Budget and handed over to FCI and NHAI) are taken in to account — the rising inflation poses a new challenge to the Government. Economists feel that if the fiscal deficit of the States is included, India is staring at a 8 per cent fiscal deficit scenario.

The rise in inflation also ties the RBI down to making any monetary policy intervention to stimulate the economy.

Under this scenario, the Government can ill afford to cut down personal income tax. While this will be a popular measure which will put more money in the hands of the common man, it will also nudge up inflation and add to the fiscal deficit by impacting revenue collection.

The rise in inflation can be attributed to sharp rise in prices of food and vegetable prices, including onion, and tomato. According to the data released by the National Statistical Office (NSO) on Monday, vegetables inflation rose to 60.5 per cent in December from 36 per cent in November.

Prices of vegetables shot up 60.5 per cent, with a 53.37 per cent increase in urban areas and 75 per cent hike in rural areas. Most of the vegetables were sold between `40 and 80 a kg since October last year. Onion prices also touched `200 a kg in some parts of the country last month.

Besides, prices of tomato, cabbage, carrot, green coriander leaves, lady finger, and potato are still high in the retail markets. Prices of pulses, milk and other food products have increased in the recent months.

The Central Government has mandated the RBI to keep inflation in the range of 4 per cent with a margin of 2 per cent on the either side. The RBI is scheduled to announce its next bi-monthly monetary policy on February 6. In its December policy, the central bank, which had been reducing rates, had kept the repo rate unchanged citing inflationary concerns.