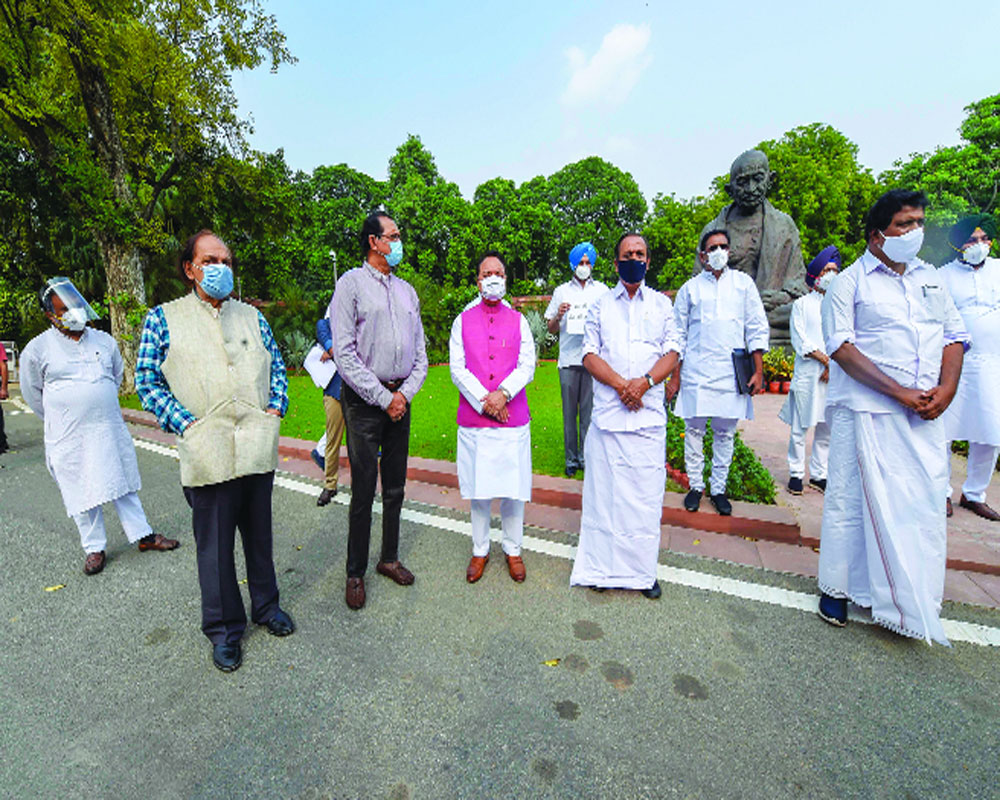 The Congress on Tuesday questioned the absence of Prime Minister Narendra Modi in the Lok Sabha when Defence Minister Rajnath Singh made a statement on the India-China border standoff. The Congress also wanted to know if the Chinese have encroached on Depsang Plains, Gogra, Pangong-Tso Lake till Finger 8, Y-junction in Bhutan, Lipulekh Pass in Uttarakhand and in Arunachal Pradesh.

Former Congress president Rahul Gandhi, who is abroad currently accompanying his mother and interim party chief Sonia Gandhi for a health check-up, attacked the Prime Minister for “misleading” the country over Chinese transgressions.

“The country has always stood by its armed forces and will continue to do so in future. But Modiji, when will you stand against China? When will we take back the land of our country from China? Don’t be scared of taking China’s name,” Rahul tweeted.

Earlier, Congress members staged a walkout from the House soon after the Defence Minister’s statement, alleging they were not allowed to raise certain issues related to the India-China border row. They later protested in front of Mahatma Gandhi’s statue in the Parliament House complex.

Addressing reporters outside Parliament, Congress’ chief spokesperson Randeep Singh Surjewala said the Government should give an answer on whether China has encroached Indian territory at specific positions across the border.

“The entire country is proud of the armed forces and that is why we are talking here. But why is the Prime Minister shying away from a discussion?” he asked.

“Our questions are very straight forward. Has China occupied Indian territory? Have the Chinese encroached on Depsang Plains, Gogra, Pangong-Tso Lake till Finger 8, Y-junction in Bhutan, Lipulekh Pass in Uttarakhand and in Arunachal Pradesh. The Government should answer these questions,” said Surjewala.

He said the Prime Minister should apologise to the nation if the answers to the questions asked by the Congress are affirmative as he had told an all-party meeting on June 19 that the Chinese have not entered and occupied Indian territory.

Congress leader in the Lok Sabha Adhir Ranjan Chowdhury said the Prime Minister’s absence from Parliament when the Defence Minister made a statement on the India-China situation showed that the Government was afraid of a discussion on the face-off.

“For the Congress party, the country is the most important. We are proud of our armed forces. This Government did not allow us to speak in Parliament. They are afraid of the Congress asking questions that they will not be able to answer,” he said.

“It is our entitlement to put forward our views. When the Defence Minister made a statement on the India-China situation in the Lok Sabha, the Prime Minister was not present. He is afraid of conducting a discussion on the issue in Parliament,” Chowdhury alleged.

In 1962, when India-China war took place, he said then Opposition leader Atal Bihari Vajpayee sought to know about the situation at the border. Then Prime Minister Jawaharlal Nehru agreed to his demand and there was a discussion for two days in Parliament on the war and border situation, he recalled.

Chowdhury said the Congress members staged a walkout from the Lok Sabha because they were not allowed to send their message to the country and the armed forces.

Congress’ deputy leader in the Lok Sabha Gaurav Gogoi told reporters that Chowdhury and his other party colleagues wanted to send a message of solidarity with the armed forces and also issue a stern warning to China that they should not test India’s patience.

“Unfortunately, the Government feels as if only they can speak in support of the Army,” he added.

“The Defence Minister excoriated China for transgressing the LAC, could the Government explain why the Prime Minister had issued an extraordinary statement claiming that China had not entered our territory? Presumably, the Government has changed the PM’s stand?” Congress leader Shashi Tharoor tweeted.

“Another question: since the Defence Minister says that both countries have now agreed in talks to respect the LAC, but separately says the two countries have differing perceptions of where LAC lies, isn’t that a recipe for another clash? Shouldn’t we just insist on status quo ante?” he added.