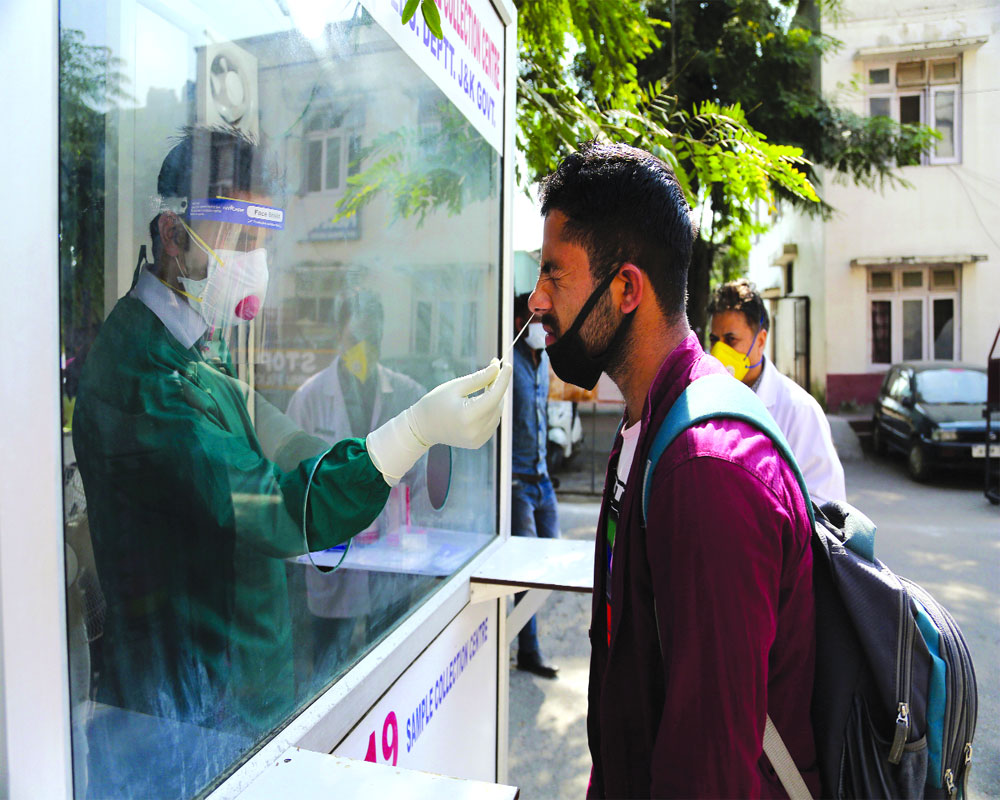 For the first time in the last one-and-half months, the number of active coronavirus cases in India has dropped below the 8-lakh mark. However, reviewing the pandemic situation in the country on Saturday, Prime Minister Narendra Modi cautioned against any complacency even as experts have warned that the onset of winters and the forthcoming festivals could lead to a spurt in the cases as has happened in Kerala after Onam.

With 70,816 patients recovering in the last 24 hours, India’s tally of active cases dropped to 7.95 lakh. Though India continues to report the highest number of new cases in the world, the daily surge has come down from over 90,000 fresh daily cases in mid-September to about 70,000 since the past week.

Decline in cases in Maharashtra has contributed in the overall decrease, even as the sharp surge in daily Covid-19 cases in Kerala, Karnataka, Rajasthan, Chhattisgarh and West Bengal has worried the Central Government, which has rushed high-level teams of experts to help control the pandemic there.

Chairing the meeting to review the Covid-19 pandemic situation and the preparedness of vaccine delivery, distribution, and administration, the Prime Minister noted a steady decline in the daily cases and the growth rate but he insisted on continued social distancing and Covid-appropriate behaviour such as wearing the mask, regularly washing hands and sanitation, especially in the wake of the upcoming festival season.

“The Prime Minister directed that we should make use of experience of successful conduct of elections and disaster management in the country. In a similar manner, vaccine delivery and administration systems should be put in place. This should involve the participation of States/UTs/district-level functionaries, civil society organisations, volunteers, citizens, and experts from all necessary domains. The entire process should have a strong IT backbone and the system should be designed in such a manner so as to have a lasting value to our healthcare system,” a PMO statement said.

The PMO said two pan-India studies on the Genome of SARS-CoV-2 (Covid-19 virus) in India conducted by ICMR and Department of BioTechnology (DBT) suggest that the virus is genetically stable and there is no major mutation in the virus.

The PMO said three vaccines are in advanced stages of development in India, out of which two are in Phase II and one is in Phase-III and Indian scientists and research teams are collaborating and strengthening the research capacities in neighbouring countries such as Afghanistan, Bhutan, Bangladesh, Maldives, Mauritius, Nepal and Sri Lanka.

There are further requests from Bangladesh, Myanmar, Qatar and Bhutan for clinical trials in their countries. To help the global community, the PM directed the health authorities that India should not limit its efforts to its immediate neighbourhood but also reach out to the entire world in providing vaccines, medicines and IT platforms for vaccine delivery system.

Echoing the Prime Minister’s sentiments on not letting the guard down, Dr RK Dhamija, public health expert and HoD of the Neurology department at Delhi-based Dr Lady Hardinge Hospital, said in Kerala after Onam there was a 126 per cent increase in active Covid cases.

“People need to be cautious, maintain social distance, wear mask and implement hygiene. Gatherings and crowded places must be avoided. The Government should also be prepared and make arrangements for patients’ admission with moderate and severe disease,” Dr Dhamija said while welcoming the Government decision to initiate the process of importing liquid oxygen to meet any unforeseen shortage during the winters and festival times.

The National Expert Group on Vaccine Administration for Covid-19 (NEGVAC) in consultation with State Governments and all relevant stakeholders have prepared and presented a detailed blueprint of vaccine storage, distribution, and administration. The Expert Group, in consultation with States, is working actively on prioritisation and distribution of the vaccine, the PMO stated.

Modi directed that keeping in view the geographical span and diversity of the country, the access to the vaccine should be ensured speedily. He stressed that every step in the logistics, delivery, and administration should be put in place rigorously. “It must include advanced planning of cold storage chains, distribution network, monitoring mechanism, advance assessment, and preparation of ancillary equipment required, such as vials, syringes etc,” the statement said.

According to Government data, the active caseload is now only 10.70 per cent of the tally. “This significant achievement is the outcome of Central Government-led targeted strategies leading to high number of recoveries and steadily falling number of fatalities,” the Health Ministry said.