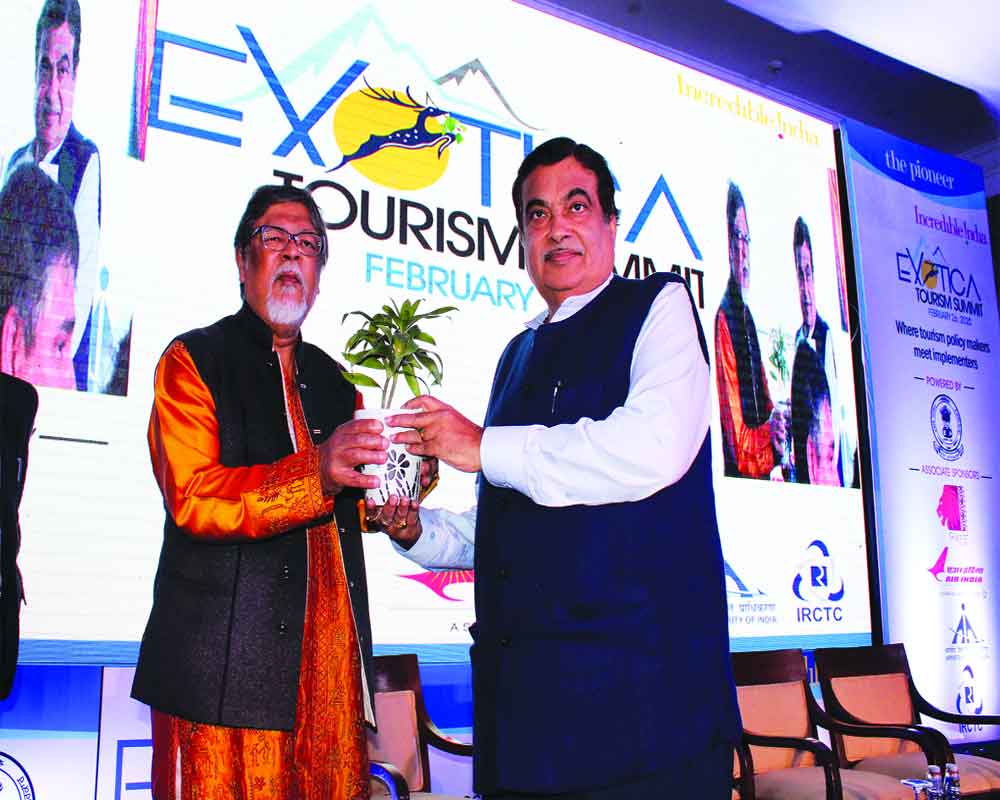 A wonder of the yore and a land of contemporary fascination, India holds enormous potential for both domestic and foreign tourists who have little explored its incredible diversity for want of promotion and infrastructure. This was the focal point of a day-long conference — The Pioneer Exotica Tourism Summit — where speakers, including Union Ministers Nitin Gadkari, Prahlad Patel and Piyush Goyal on Wednesday showcased India as a dream tourist destination.

The conference was divided in five different panels, the first being ‘Dekho apna desh’. This was moderated by The Pioneer Editor-in-Chief Dr Chandan Mitra and addressed by Tourism Minister and chief guest Prahlad Patel.

Union Minister for Road, Transport and Highways Nitin Gadkari was guest of honour at another panel discussion titled “Highway to heaven”. Dr Mitra was the moderator.

Minister of Railways Piyush Goyal spoke on the theme “Deep into India’s heart” in conversation with Dr Mitra.

In a speech heard with rapt attention, Prahlad Patel, Minister of State (independent charge) for Culture and Tourism, talked about involvement of all the stakeholders, including the Centre and State Governments, hotels, tour operators and locals, for the growth of tourism in the country. He said that by next five years, the Government aims to double the domestic tourist footfall.

“We all are responsible for the growth of the tourism sector and an individual cannot individually promote it. All the sectors should come together for its growth,” he said while speaking at the Pioneer Exotica Tourism Summit 2020 here on Thursday.

Patel was of the view that the tourism has never been given its due importance in the past. “Had it been, we would have witnessed tremendous progress in the North-East region where connectivity was never taken seriously. More than monetary benefits, it is the positive perception towards the tourism that matters. With our holistic approach, we aim to double our domestic tourist footfall within next five years,” he added.

Union Minister Nitin Gadkari suggested the stakeholders in the sector to adopt three basic formulas — the PPP model, fast environment clearances, and innovative ideas, besides a strong political will.

Gadkari said his Ministry is working on 22 green corridors, a dedicated Mumbai-Delhi Expressway, and direct road connectivity to Mansarovar. These will help in growth and generation of employment in the tourism sector, Gadkari said, adding India under the dynamic leadership of Prime Minister Narendra Modi is on the path of being a “Tourism Giant.”

Gadkari said tourism has great employment potential and this is the way forward to eradicate poverty from the country.

Gadkari said the country’s ethno structure requires a great improvement if we need to augment tourism.

Gadkari said the Centre in coordination with Delhi and neighboring States is working on a war footing level to contain the pollution in the national Capital.

Stating that pollution and bad air environment have been a deterrent to tourists in visiting Delhi, Gadkari said project worth Rs 55,000 crore are on anvil and 150 black spots have been identified to reduce the pollution.

Talking about efforts of Railways to promote tourism, Railway Minister Piyush Goyal said, “We are running Ramayan Express which will connect sites associated with Lord Ram. Similarly there is a train called Saamanta Express which will cover prominent places associated with Gautam Buddha and chief architect of the Constitution Dr BR Ambedkar,” The idea is also to take the railway to Char Dham, he added.

The Minister said that as a nation we all must act together to bring the excitement back of promoting India. In fact Prime Minister Narendra Modi himself suggested each of us to plan a visit of 15 places within the country in next three years.

“India has a huge potential and I am sure this initiative will go a long way in promoting tourism,” he added.

Former Air India Chairman Ashwani Lohani underlined the need for promoting tourism by innovative means and greater connectivity. He also stressed the need for installing proper signages and create a literature bank of tourist spots of the country.

Fashion designer Ritu Beri talked about the need to promote domestic tourism and handicraft and said India offered a great potential to emerge as a mega tourist hot spot in the world.

In his interaction with the Ministers, Dr Mitra  appreciated the vision of Tourism Minister Prahlad Patel in promoting tourism and said this will go a long way in tackling India’s unemployment problem.

Dr Mitra called Gadkari a visionary and said he is a Minister known to achieve whatever he sets out to do. He referred to tremendous work done by Gadkari in changing the face of Nagpur and pointed out that the Minister’s effort at infrastructure building will go a long way in tourism promotion.

Dr Mitra highlighted Piyush Goyal’s efforts for reviving the age-old romance of Indian railways and said that ever since he took over as boss of the Ministry, Indian Railways has made big strides in infrastructure building. Dr Mitra also talked about Railway’s importance in uniting the country and tourism promotion.