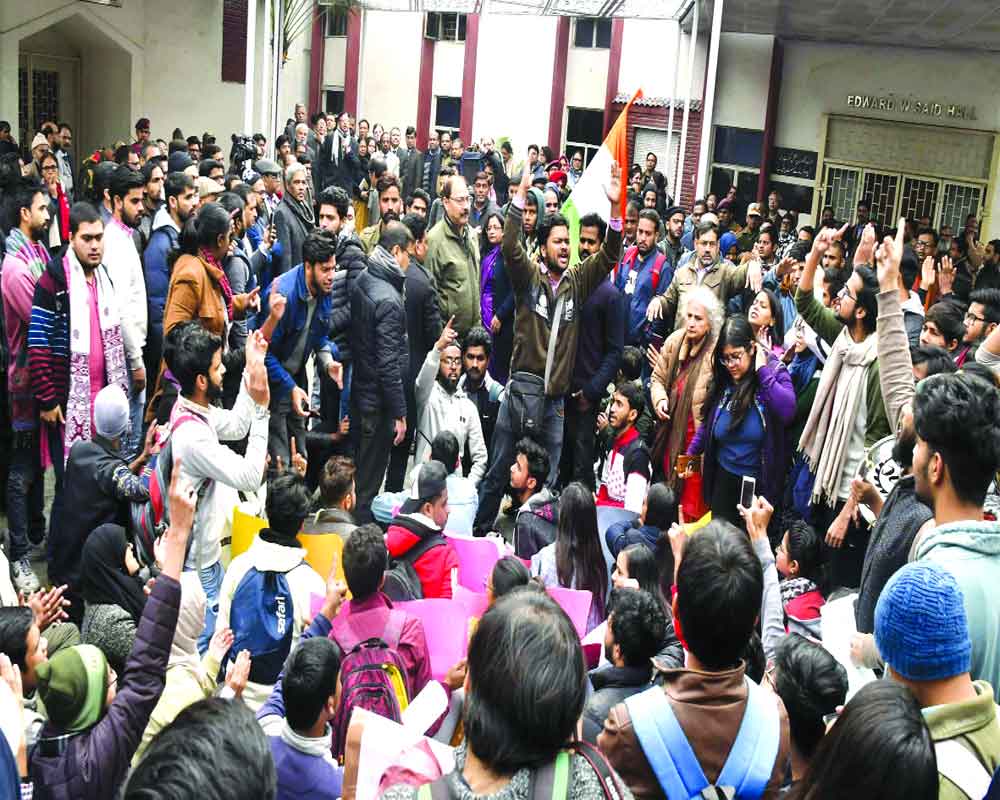 With the normalcy yet to return on the Jamia Millia Islamia campus even after 30 days of anti-CAA, NRC protests that saw the police crackdown and triggered boycott of exams by some students, many parents are in two minds over the safety of their wards on the campus, particularly in the hostels of the  university.

What added to students and parents’ worry was the development on Monday in which Vice Chancellor Najma Akhtar, buckling under the protesting students’ pressure, announcing that the ongoing semester exams stand cancelled until further notice.

The development has left the students and several parents vexed as many studying in the final year of graduation and postgraduation courses strongly feel that the delay in holding exam will jeopardise their future.  Several students expressed their worries to The Pioneer.

Students said they want to study but they can’t oppose students who have been protesting peacefully against the CAA and police crackdown.

“We have right to express our points of view about the unprovoked police action inside the campus, during the protest.  It had left many students injured and one of them had lost his left eye”, said Hamid, a postgraduate student.

“My parents called me after the violence and first thing they said was to pack my bags and come home. I tried to convince them that I am fine but they said you are not secure as the campus lacks security,” said Shazia, a girl student.

“Most of the students do not support the ongoing protest. CAA is not students’ issue and if we want to raise voice against it, we can take out a march to Parliament and sit on dharna for seven days but not for 40 days,” said Shubham Rai, a research scholar at Nelson Mandela Centre.

“Now exams were to start from January 9 but it has been postponed and the classes will start from February 3,” said Rai.

“We do hope that it is delayed further as that would harm the prospects of students who are in their finals year. Will they not face difficulty while applying for another course since result may also come late,” said Rai who visibly looked morose.

“Just after the violence, most of the students left Jamia hostels as their parents got worried about the safety of their wards. Even parents who had sent their ward to study in this premier institute to make their future bright now rues that it was better if they had got their child admitted to a private university for education,” said Manoj Kataria, the Treasurer of the Parents Association in city.

Though, Jamia administration has postponed its examinations but the students have started to come.

Meanwhile, a section of students sitting on protest said that they will continue their protest till appropriate action is taken against the police inaction and till the CAA is revoked.  “We are demanding independent enquiry that why did police entered our campus without any permission. Even the VC had said that no permission was given to police to enter the campus,” said a protesting student.

Saeed Fahad, a student, said FIRs have been registered against those who were demanding their rights during protest. The real accused are still at large, he said referring to the police crackdown.

It may be recalled, on December 15, violent scenes were witnessed in and around JMI during a protest march organised by students against the CAA. The protest took a violent turn and many buses were set on fire. Instances of stone pelting were also reported. The police resorted to firing teargas shells. Students have alleged that police barged into the university library and started beating them up.

Jamia Millia’s Vice-Chancellor too has said the police entered the university campus without any permission. Police said that most protesters who took part in violence in and around Delhi’s JMI on Sunday were people who were not students.