‘Lot of scope for English songs in India’

‘Lot of scope for English songs in India’ 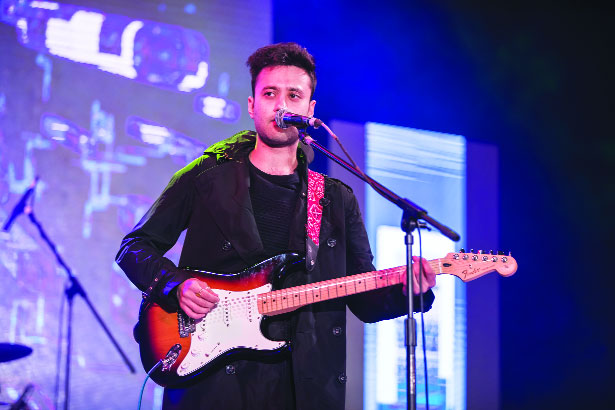 AARYAN BANTHIA, who has tied up with Zee Music, for his latest composition, speaks with SHALINI SAKSENA about his band, how he made a career in music and Bollywood plans

How did your musical journey start?

I used to sing even when I was in Class VI-VIII. Apart from my parents nobody knew I could sing well. I come a business class family and it was till I was in Cardiff Metropolitan University, UK that I started singing at open mics. People started coming for shows since they liked my voice. I performing there and realised I could take up seriously. I came back to India and decided to take up music more seriously and started training in Hindustani classical music.

Why not pursue a career as a Hindustani Classical singer?

I have been training in classical music for the last two years. I have always had an ear for music, even when I was teenager, not that I am master of it. But I understand the subject and work on it. I want to raise the bar of my music and do bigger things in this field. The reason why I have not taken up Hindustani classical professionally is because there isn’t a much feel people market for it. Not that I care for it but I want to establish myself in the Pop space. I have knack for singing such songs. Once I am established, I can do my stuff and people will follow.

When did you realise that music was your calling?

Music has become thing now in India. Back then making a career in music was not so easy. The confidence came much later. It was in the UK that I decided to get into the English scene since I used to sing English songs. So, yes, the confidence came in the UK.

I understand that you are mentoring with Kumar Mukherjee. What are you learning?

He is my mentor and have been training with him since 2018 in classical music. He teaches me ragas and paltas. He is from the Kasur Patiala Gharana. The gharana is about training in music in a manner where one can use the vocals in any genre of music. I am able to sing all kinds of genres due to the exercises he is giving me. I train for seven-eight hours a day. Of course, not at a stretch.

Do you still perform with your band — The Bombay Gramophone Company?

Yes, I do. I recently performed in Kolkata but due to Coronavirus it didn’t have large gathering. I started my career from stage with four friends. My band is very Kolkata-oriented but I wanted to explore my music and wanted to do different things. I wanted to do my kind of stuff.

Is it tough to make a place for yourself in the independent space?

It has been. When we formed the band, we became popular within a year. But when it came to indie space it was different. But time has been on my side. People started noticing me and know my name now. I can compose but writing songs is a challenge since I have never written it.

How did you tie-up with Zee Music Company?

I tied-up up a project — Yaadein — and it had done very well. It garnered a million views and has been growing. My initial plan was to work with Sony but then Zee came and happy working with them. I have not tied-up with them but we have an understanding — my next single will be released through them.

Initially, when I came to Mumbai I wanted to playback. But I got a feedback that I needed to do my stuff since I have a good voice and Bollywood would notice me automatically. If I get a chance, I would take it up. I am waiting for my time. I would love to do a song like Abhi mujh me kahin by Sonu Nigam I would take up in a jiffy. I look up to him. He is a beautiful singer.

I am working on another English song. Billboard had taken it up and put it on upcoming artists. I wanted to be on the main list. But I don’t have a list of many songs. If I had that I would be somewhere on the main list. Once the lockdown opens, I will shoot the song. I want to do more English songs and work with international market.

Is there scope of English songs in India?

Millennials are growing and their vison is international. What happens in the US comes to India 10 years down the line like rap. Now everyone is rapping. I look up to John Meyers and see myself and want to make music of that level. I see English music growing in India.