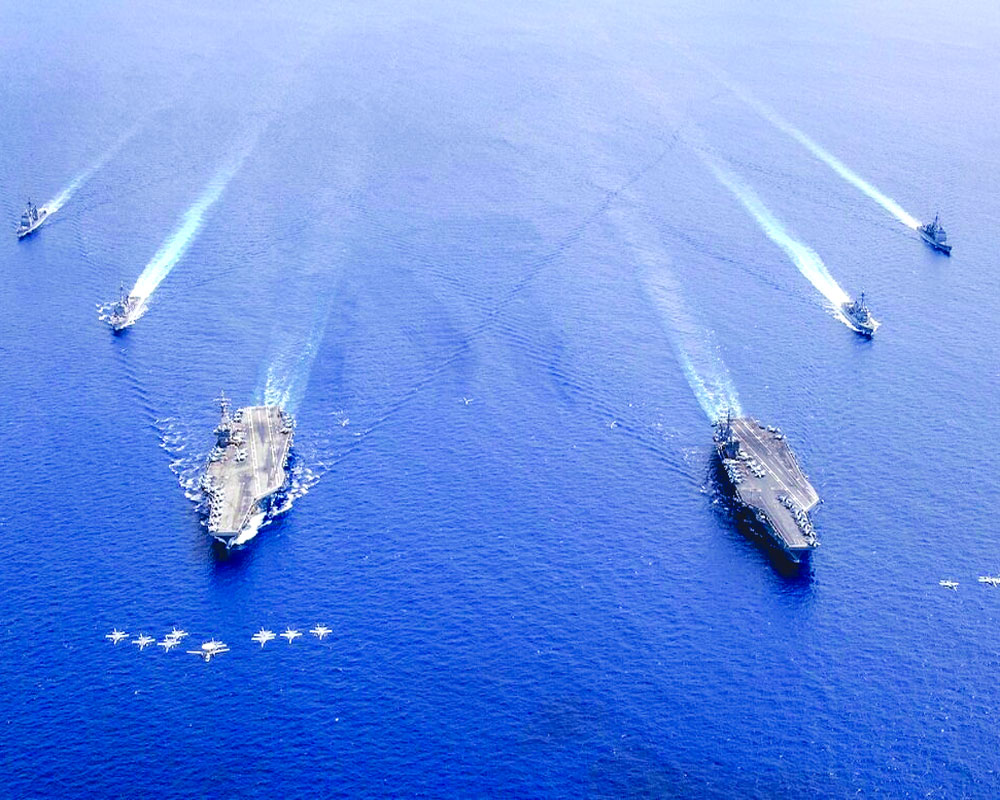 The United States of America and China have emerged as a curious admixture with the Chinese hegemonic designs finding a preponderant reflection in the contemporary state of world politics and the larger ecosystem of global bonhomie. The US has always been part of a prominent and malefactor myth as a global dominator and an arm-twisting dominion which is cruel and excessively predatory. It is in effect only a national actor which acts on sheer national interest which any sovereign nation and its diplomatists would do. In fact, it’s the designs of the People’s Republic of China which are holding the entire comity of nations in a state of strategic and geo-economic fix.

All in all, the strange Chinese origins of the coronavirus, the reflection of Chinese “institutions” such as the World Health Organization along with the recent India-Sino border stand-off have exposed the Han for what they are. They re-emphasise their identity as pompous and vitriolic power mongers, who are out on an adventure of territorial world domination. These streets are very harmful for the upkeep of international cooperation and camaraderie in the larger rubric of the international system which makes it essential for the emergence of a global coalition to contain and stem the Chinese hegemony and the global regime of autocracy.

It all began on a negative note, wherein US President Donald Trump imposed telling economic tariffs on the Chinese goods contending that the “Chinese steal our nation and its profits”, as per one excerpt from his numerous instances of Tweeter diplomacy. President Trump attempted to reduce the trade deficit with China and the recalcitrant Chinese hit back with compounding sanctions of the larger American business interests. All this confrontation, initiated an avalanche of recalcitrant moves and counter moves on the part of both the nations, one being a true blue superpower and the other being a hyper geo-economic power aiming to knock off the US from its steed as the global regulator in order to occupy the geo-economic and geo-strategic perch.

Thus, on the lines of a largely geo-political stand-off between the Americans and the Soviet Union during the days of cold war, Russia has been replaced by the Han as the American bête noir in the contemporary sense of the term. In these testy Covid times, both the nations are at loggerheads with the Chinese striving to replicate a coup d’etat in the new troubling age of the pandemic.

The web think tank Diplomat reports: “The Chinese National People’s Congress recently introduced a draft decision to put in place laws and enforcement measures in Hong Kong ostensibly to ‘safeguard national security’, outlawing any act of ‘secession, subversion or foreign interference’. In 2003 (ironically, the year of the SARS outbreak), the Hong Kong authorities’ effort to ram through a similar law was derailed by protests.”

Also, to act in unison with the Chinese communist autarchy, the US senate too passed a resolution in order to stem the tide and to respond to the Chinese dressing down the denizens of Hong Kong. Taiwan can be another flashpoint in the near future which can derail the bandwagon of the Chinese trade outreach. The man in the White House has already declared the United States is taking off the special autonomous zone status from the besieged free-trade citadel of Hong Kong which casts aspersions on the dubious human rights record of the Han. The American support and ideological succour to the Taiwanese regime always hangs as a sword of Damocles upon the suppressed communist largesse of the People’s Republic of China. And finally, the whole world waits with bated breadth about what will be the impact and consequence of the American Pacific fleet in waters of the allied nation-state of Philippines which can be appreciably read as a kind of a naval demarche to the hegemonic designs of the People’s Republic of China.

The background and the related facts in the Taiwan Relations Act of the US Congress categorically affirm the “one China” policy of the Chinese regime but still floors the Chinese by adding that America will maintain cultural, commercial and other unofficial relationship with the people of Taiwan but will recognise the Government in Beijing as the sole Government of China. This leaves the status of Taiwan in a kind of ambiguity and along with it the tirade room is created between the US and China.

The act promulgated in the year 1979 paved a way for the belittlement of Taiwan, wherein, the Americans vowed to hold the sanctity of all treaties and international agreements with China running short of sovereignty and promised to pose trust in the trade and commerce element of the agreements with Taiwan. Finally, an American institute in Taiwan was framed in order to serve as housing the American representative short of a full-fledged Ambassador in the twilight zone of Taiwan.

President Trump faces an uphill electoral task in the light of the China virus scrutiny in the American homeland. China too flagellates itself and can be enumerated as a tangible threat to world peace and stoic stolidity but the US will not let it slip away so easily. As an adjunct to the larger narrative of trade wars, China has warned Washington not to excessively suppress the Chinese companies of the order of Huawei. On the geo-political fence too, China is engaging America on the question of supporting the pro-democracy protests in the city citadel of Hong Kong.

The British Broadcasting Corporation reports: “Asked why he did not use the Global Magnitsky Act — passed by Congress in 2016 to counter human rights violations — Mr Trump said, ‘Nobody’s mentioned it specifically to me with regard to China’. The Axios also pressed Mr Trump on the allegation from Mr Bolton, his ex-national security adviser, that he had asked President Xi to help him win re-election by buying agricultural produce from US farmers.”

The allegation that President Trump indicated to the Chinese political denomination about lending a helping hand in his re-lection too appears both farfetched and a lie with not too many legs to carry the lie to successful completion. One can also hark back to the month of January before the advent of a Covid-ridden world wherein President Trump heaped a mammoth sanction on Chinese imports of the order of 360 billion dollars along with attracting Chinese counter sanctions on American exports of the order of around 110 billion dollars in an effort to balance the cold war two’s account sheet. Apart from the geo-economics part of it, the recent maritime activity by one of the many American naval fleets near Philippines makes the pitch complicated for China in the light of the border stand-off with India, wherein it’s the time for Gun Boat Diplomacy in the reverse order.