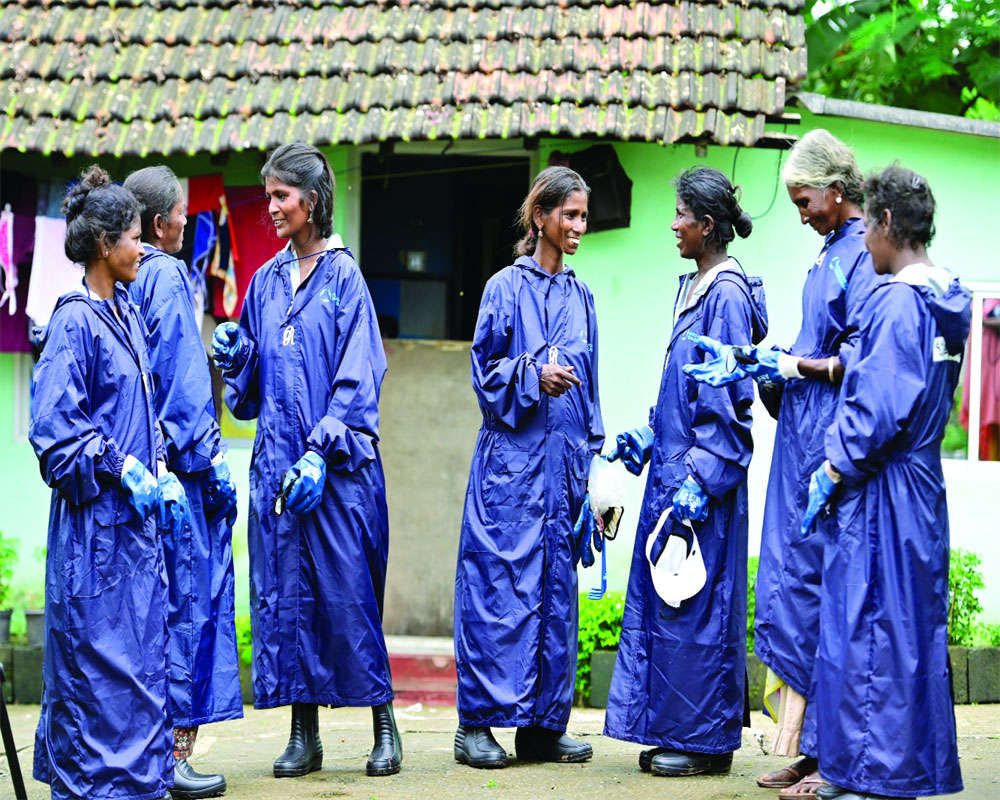 There are many workers who risk their lives just so that we can keep going. They are mostly never noticed. Women waste pickers are among one of them. The Body Shop and Plastic For Change India Foundation have launched Project NARI which aims at making a difference in their lives. MUSBA HASHMI speaks to these frontline workers to bring you a report

Plastic is merely a matter of waste for us, but to them it is as precious as it can be. Meet a 23-year-old  Mangalore-based woman waste picker, Roopa who has been  collecting waste from a landfill in Pachanady for about a year now.

A mother to a young daughter and having a big family to take care of, Roopa had no option but to join her mother in the profession after her husband met with an accident, that left him bed-ridden.

“Collecting waste at the landfill is very much a part of my family’s history — my grandparents used to do it, then my parents and finally I got into it as well,” she says.

Fortunately, Roopa doesn’t have to go through a lot of indifferent behaviour from the society and doesn’t hold any grudges against anyone, but there are a few incidents that did bother her at some point.

“I didn’t face any real issue from my community, but when I would visit my grandparents — during the time I used to collect waste from the landfill — their neighbours used to insult me. They called me names. They asked me if I didn’t have a better job to do. Some even behaved like we were untouchables. But I stood strong and doesn’t let their taunts make much difference in my life. I bravely stood my ground and told them that what we were doing was honest labour and that there is nothing to feel ashamed about. What kept me going all this while was the belief that no job is big or small and every occupation deserves equal respect,” Roopa tells you.

Spending atleast seven hours at the landfills, surrounded by every kind of waste, under the scorching sun, earned Roopa, not more than Rs 500 a day. Only if we would be able to imagine the ordeal she had to go through

“All what we could do with this money was to eat food and cover ourselves,” she says.

During COVID, she says, the prices of the material we would collect from landfills and sell to scrap shops plummeted and so our income reduced dramatically. We didn’t even have proper rations at home.

Though there were a lot of apprehensions in Roopa’s mind when she took up the job, she never had any fear of catching infections. “Before COVID-19, it didn’t hit our mind that we could fall sick. It was only when the pandemic hit that we realised about the danger that lies ahead of us,” she explains.

Not that she never felt like quitting. There were a dozen times when she thought of giving up the job and do something else.

“Since I had completed my PUC, I had initially refused to go to the landfill because I wanted to get a better job, but because of our family’s financial circumstances I was forced to help support my mother and start collecting waste along with her. I did it with a heavy heart. There were quite a few times in between when I wanted to give up this job, but then I was laid back each and every time because of these financial issues,” she tells you.

However, not all is lost in Roopa’s story. Her life changed when Plastic for Change India Foundation identified her and extended a helping hand to her and family. “Plastic For Change India Foundation reached out to me and offered me a job role as a Quality Engineer at their factory. Ever since I have started working with them, all the insults that I had received in my life, stopped right then and there. I love my new job and I couldn’t have asked for more. It gives me a feeling of pride that I am able to do something different in life now and can make way for a bright future of my children,” she tells you with a smile.

She adds that the initiative by The Body Shop and Plastic For Change India Foundation has helped her in many ways. “Whether it was the new jobs we were offered or the PPE kits  we received and the installation of the water supply — the intervention of these brands is making a difference in our community,” she tells you.

Having seen all the hardships in her lives at an early age, Roopa feels that everyone should be treated equally, regardless of their background. “I hope that my children doesn’t have to go through all that I had to endure while growing up. It is disturbing. It torns our confidence into shreds. I wish my children get best of the education and grow up to do a job that they like. I just want them to make and earn a better life for themselves with all the respect from the society and passion towards their work,” she says.

She has a request to make to the Government. “It’d be great if the Government recognise our work and could provide some support in helping me build a house for my family,” she says.

Roopa is not an exception here. A 30-year-old Mangalore-based Manjula too has to go through the same situation in life. But unlike Roopa, she has been into this profession for more than three years now.

“It was when our family was going through financial crisis that I started collecting waste from the landfill. A few of my neighbours used to go there to earn a living and that’s how I began as well, since I thought it’d be a good source of income,” Manjula, who lives with her husband and a 14-year-old daughter, tells you.

Since most of her community is involved in the same kind of work, Manjula haven’t faced any real indifference in the society. “However, while I used to collect waste from the landfill many would show sympathy towards me and questioned why I hadn’t tried out some other profession, since I was educated till PUC,” she says.

Like Roopa, her life changed and for the better when Jayanthi, a member of Plastics For Change India Foundation reached out to offered a job to her. “I am extremely grateful to Jayanthi ma’am who gave me the opportunity to work as a Quality Engineer. The job not only solved my financial worries but also saved me from working long hours at the landfill,” she tells you.

Getting a role as a Quality Engineer has definitely caused a major positive difference in her life.

“The tuition classes and the nutritional food that they provide to my daughter is another major help for my family. I’m also grateful to see the number of other social schemes that Plastics For Change India Foundation and The Body Shop is bringing to my community,” she adds.

Only if one could imagine the ordeal of these women waste pickers who spend more than half of their day at the landfill collecting all types of waste and then return home only to cook for their family.

“There is no chance that anyone could like this work. But it was not as if we have an option. It makes us feel like puking. The smell sometimes become unbearable, especially during the monsoon. If I would go on to describe the scenario, one would be left disgusted,” she explains and tells you that she used to spend nothing less than five to six hours daily at the landfill while collecting waste.

It goes without saying that many a times, Manjula thought of quitting this work, but it was not easy. “Like I said, I have a family to take care of. There were times when I made up my mind that I would leave this work, but then I realised that I couldn’t afford to. The rainy season is the most hazardous  for us, not only because it is an uncomfortable time to work,  but also because there are so many other risks involved. One can also meet with an accident. Even when I recall that time, a tear or two won’t stop from falling down my eyes,” Manjula, who earned Rs 4000 a week, tells you.

She says that she was well aware about all the risks involved at the landfill and hence, she took all the necessary precautions while working. “I was aware of the risks that collecting waste involved, and so I would be very cautious and ensure I wore boots and gloves. I’d also take a bath and wash my clothes as soon as I returned from the landfill,” she tells you.

While having a home to live, clean water to drink and electricity are nothing but our daily needs, for these waste pickers it is nothing less than a luxury that they have to ask from the Government. “I hope the Government can provide some support in helping me build a house for my family. And for my community it’d be great if the Government could set up public washrooms and toilets, since there aren’t any, as well as a stable power supply,” she tells you.

It shows how one of the most important part of our society are struggling hard to live a normal life, which is obviously not so normal for them.