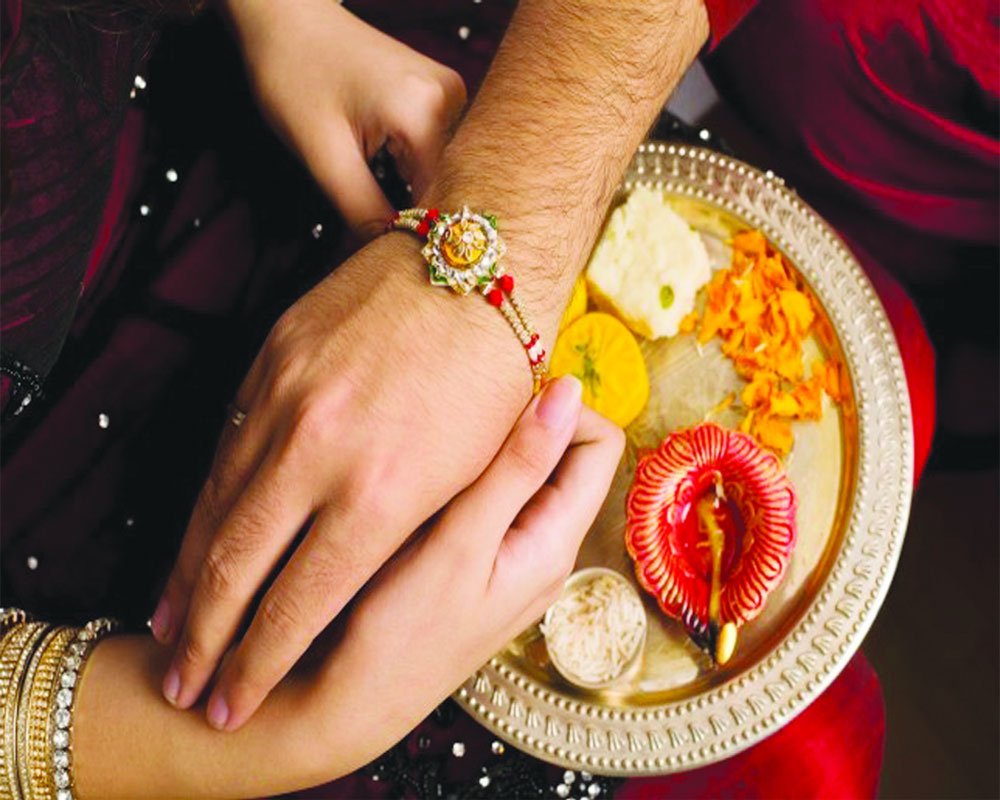 Rakshabandhan is just round the corner. However, the excitement is not the same. With people avoiding all kinds of travel due to the pandemic, the festival this time will definitely give different feel to many, says  MUSBA HASHMI

Friendly banters, that can sometimes turn into ugly fights, putting each other into the most embarrassing situations and the unending argument about who is the adopted one, are the foundation stones of a brother-sister relationship. No matter how ugly things can turn between the two, but the moment someone tries to hurt them, siblings are there for each other acting as a shield.

A song that was specially made to cherish the bitter-sweet relationship, bhaiyya morey rakhi ke bandhan ko nibhaana, sounds as fresh till date. However, with Coronavirus’ raging fury which has disrupted every aspect of life world over, let alone the festival, getting back normalcy seems a difficult milestone for the human race.

It goes without saying that the essence of festivals has faded away, with friends and family hesitating to pay a visit to their loved ones, a festival is now just like any other day for many. Such is the case with Rakshabandhan, this year. Sending rakhis to your brother via courier is not something new, but was never considered the new normal.

“My elder brother, Himanshu, lives in Australia. Celebrating rakshabandhan together was a ritual. In fact, his week-long stay at home was in itself a festival for us. But this time, he couldn’t fly back to India for obvious reasons. Though, I will be sending him a rakhi, but that will not fill the void. This is the first time when I would not be tying rakhi on his wrist myself. Not to mention, there will be no fight for my gift too. The festival this time will definitely feel incomplete,” a 21-year-old, disheartened sister, Riya Middha, says.

Middha is not an exception. Many people are now preferring to stay back and instead courier rakhis to their brothers. Pawan Gadia, CEO, online and retail, Ferns N Petals, India, UAE & Singapore, tells you that as compared to last year, the site has seen a 50 per cent surge in customers. “We didn’t anticipate such a surge in our customers, given the situation this year. However, due to the pandemic a lot of people are now buying rakhis online and getting it delivered to their brother’s place. There’s still a week to go for the festival and we are now anticipating more delivery requests and accordingly we are restocking our warehouses,” he tells you.

He tells you that the brand has already received 300 thousand orders for rakhi and by the end of the season they see this growing to 1.5 million.

“So far we have received around 11thousand personalised rakhi orders on our mobile app. We have also launched personalised rakhi app, for which we have got around 1000 orders and expecting to get 3000 orders for the same by end of the rakhi season,” he tells you.  He adds that the brand doesn’t only deliver rakhis in India but abroad too and the demand this year has grown manifold. “This time there is a huge surge in customers who want the rakhis to be delivered in other countries  too, mostly in the US, followed by UK, Singapore, UAE and a couple of others,” he tells you. The reason being no international flights in place, and even if they will many people will hesitate to fly given the situation.

Given the cost conscious customers of the brand, the cost of the rakhis start at Rs 300, delivered to your brother’s place across any country and in less than Rs 700, one can have the rakhis delivered in couple of countries in the world.

Not only rakhis, but people are opting to send a range of other products along with rakhis just to give a special feel to the festival, even if they are not together.

“Personalised gifts are in trend. It is something that many people are buying along with rakhis,” Gadia tells you.

The high statistics of people buying and getting the rakhis delivered online are enough evidence to prove how different the festival will be this year. More so, when a simple kalawa rakhi which once costed just Rs 20 is now selling at not less than Rs 50.

Another saddened sister, Jyoti Pandey, who too can’t visit his brother in Baroda, says that though the festival is not the same this year, she is trying to make it as special as possible.

“In the wake of the pandemic, I don’t find it a good idea to travel all the way to Baroda from Mumbai. Therefore, I have sent a personalised rakhi to my brother and to make him feel more special and that he is not alone, I will be sending some customised gifts as well.

Also, we are planning to get on a video call on rakshabandhan and then follow our customs. Though it will not suffice, still through technology we can feel that we are together,” Pandey asserts.

SAY IT WITH STYLE

These cute little mouthwatering delicacies in the form of rakhis are exclusively handcrafted, bringing to your loved ones the flavors of food. Made with Thai clay, each piece takes three days to be ready.  Offering in menu everything — from soft-melting gulab jamun and ever favourite kaju katli to paneer tikka to North-Indian parantha with lassi to classic South Indian sambar dosa to Punjabi dal-makhni nan to yummy burgers, sandwiches and crispy Lays. These rakhis have embedded magnets in the pieces so that every time your brother opens the fridge door, the pieces would recall your everlasting sibling love.

A gorgeous rakhi that displays the special traditions, embellished with silver, golden & red stone will make the festival more special and eye-catching. If your brother loves gold and you are searching for a pretty rakhi, then you can surely go with this option.

Method: Divide the fondant into equal portions and  add food colors to have respective colourful fondants  and keep them aside .