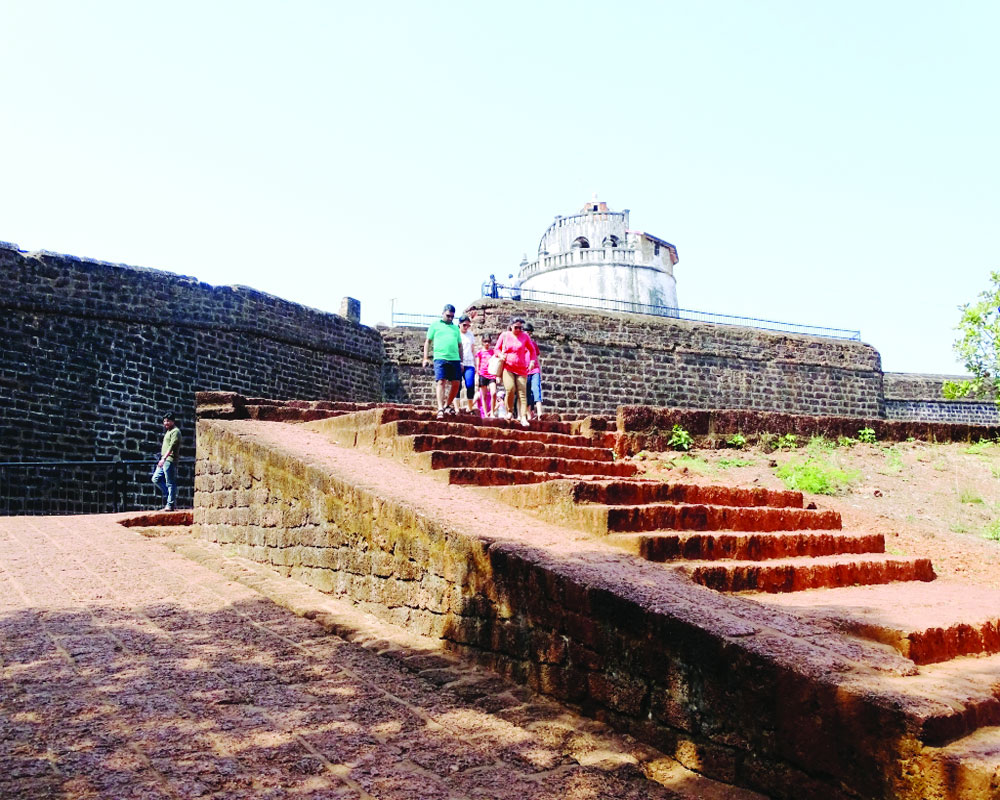 Goa and Portuguese colonisation of India are almost synonymous. Few know that Goa has a past that dates back to the saga of Parshuram in Hindu mythology and India's pre-Islamic era, writes Somen Sengupta. UNESCO World Heritage Week was recently celebrated in India from November 19 to November 25

Nestled between the Western Ghats and Sahayadri Hills, and watered by two beautiful rivers named Mandovi and Zuari, this land was long isolated from the Indians. It was isolated not because of any physical feature or inaccessibility, but for its distinctive history and heritage that was seemingly “foreign” for British-ruled Indians. Goa, the coastal territory of Konkan heartland, was always a hidden pearl and a priced colonial nest for Portugal, a country that traded and ruled at many parts of the globe for several centuries.

Goa and Portuguese colonisation of India are almost synonymous. Few know Goa has a past that dates back to the saga of Parshuram in Hindu mythology and India’s pre-Islamic era.

Hindu mythology says that this land was created from sea by Parashuram the 6th incarnation of Vishnu. Parashuram, according to mythology, excavated this surface from sea with his arrow and gifted it to the Brahmins. In the ancient times, it was known as Govapuri and later Gomantak.

In 3rd century BC, it was a part of Maurya Empire and after that till the end of 750 AD almost all Hindu dynasties of Western India like Satavahanas, Chalukya and Rashtrakuta ruled this land. It fell into the hands of Muslims in 1312 and again in 1370, Hindu king of Vijaynagar conquered it. Hindu rule ended in 1470 when Adil Shah of Bijapur gained Goa.

This was the time when the fragrance of Goa’s exotic spices began to attract the Portuguese, who had already arrived in Kerala in 1498, like a magnet. In 1510, 12 years after Vasco Da Gama arrived in Kerala as a trader, another Portuguese named Alfonso De Albuquerque showed his military might and became the ruler of Goa.

Soon after, they took over Diu in 1534 and Daman in 1559. A large part of Bengal was already under the Portuguese and with the new territory, they cemented a foundation of India’s Portuguese colonisation. This prevailed till 1961, following which India reclaimed it after a soft military operation.

The conquest of Goa was perhaps the beginning of Portuguese dream to imprint their colonial stamp upon India. As a tyrannical race they soon got into conflict with local Indians, resulting in demolition of temples and forceful religious conversions. This was also the time when they tried to stop the practice of sati cult but failed. Soon the need was felt to protect Goa from other European powers, like British and Dutch East India Company, and even from the Maratha warrior, Shivaji, who attacked the Portuguese of Goa.

The need for military competence pushed the Portuguese to go for massive fortification. They got direct support from Lisbon to expand their activities in India, such as expansion of Christianity, through the missionaries landing from Europe. Soon there was a visible change in the entire demography of Goa and tangible changes in architecture, language, food, dress, music and sports Goa came about. Goa gradually became a unique place within India.

This little Portugal of India gradually boomed in its own style and pace. Majestic churches, forts, printing press and above all a legend named “St Francis Xavier” turned Goa into an unparalleled place to which no other Portuguese colonies of India (be it those in Bengal or Gujarat) came a close match.

Towering among the past relic of that fascinating time is Fort Aguada that was built from 1609 to 1612 and still stands  a living testimony at north Goa. This is one of the few forts of India, that was never conquered by enemies.

Built in sturdy brown laterite stone for the sake of combating the British, Dutch and Marathas, this is perhaps the best sample of Portuguese military architecture in India. Aguada means water, and this fort once had several sweet water streams flowing inside it, offering a great provision of drinking water both for its habitants and sailing ships that used to anchor near it. The fort strategically faces Candolim beach near river Mandovi. The upper part of the fort was used as water station and fort where as the lower part was used to berth Portuguese war ships. The huge water reservoir is assumed to store not less than 23,76,000 gallons of water.

The 1.3 metre thick fortification wall skirts the seashore and ascends the edge of bare rocky island. The massive grand stand of Fort Aguada once had 79 canons in place. A 13 mt high light house built in 1864 is the most iconic landmark of the fort. It often appears in many movies. St Lawrence church built in 1630 is situated inside the fort.

Though a large part of the fort is now dilapidated and submerged in water, its remains give enough idea of typical Portuguese style of fortification. Its well planned moats, gunpower room, bastions, light house and escape passage all are still visible and very clearly mirror mystic timeline of the history.

Goa witnessed a silent revolution when India’s first printing press was set up there, though accidentally. It is interesting to note that the first book printed in India was not in Bombay or Bengal Presidency, where historically almost all modern wonders landed from Europe.

It was in September 1556 when a printing press machine, which was originally meant to be delivered at Abyssinia or Ethiopia, arrived in Goa and placed in St Paul’s college. From that machine, for the first time, a Spanish technologist named Juan De Bustamante printed a book of Theology named Conclusions Philosophic.

This machine was actually shipped from Portugal to Abyssinia of Africa. When the ship anchored at Goa on its way to Abyssinia, the relations between the two countries had declined as the king of Abyssinia detested the fact that Christian missionary had come to his country. So the machine was abandoned at Goa and it was sheer luck that India, as the first country of Asia, got to see the magic of printing machine. Unfortunately, after 1660, the machine went traceless. Today, a printing museum in Goa tells the story without showing any tangible relics.

Portuguese touch is palpable in every corner of old Goa, especially in its massive churches and cathedrals. Two most significant of those are Se Cathedral de Santa Catarina and Basilica de Bom Jesus. Both are UNESCO world heritage monuments and both are filled with stories of exciting history of Portuguese conquest of Goa and its religious history.

Se Cathedral is perhaps the most celebrated religious building of Goa. This is the largest church of India and even bigger than any in Portugal.

A classical example of Gothic Portuguese Manueline style of architecture, this massive church of 250 ft in length and 187 ft wide was built between 1562 to 1619 during the golden era of Portuguese.

Dedicated to the feast of St Catherine of Alexandria, it was built to commemorate the victory of Portuguese over Muslims in 1510. The church exterior bears a Tuscan touch while the interiors are much of Corinthian. Its extraordinary Iberian façade, colourful mosaic floors, typical European ceiling and exotic wood carvings, all put together, create an outstanding piece of European architecture which is matchless on many counts. The laterite plinth and lime plaster of the church have survived the test of time.

Earlier, the church had two towers. One of which was grounded in 1776. The church has a bell called the Golden bell and a chapel known as Cross of Miracles. It is believed that in 1619, the vision of Christ had fallen there. This legend attracts a huge crowd all across the globe. It is the Cathedral of Arch Bishop of Goa. A convent adjacent to it houses a small yet good archaeological museum.

If Se Cathedral is famous for Cross of Miracle then Basilica de Bom Jesus (a smaller monument) is a bigger crowd puller as it holds the legend of St Francis Xavier, the man who is considered the “greatest figure in Asia after St Thomas the Apostle”.

Goa’s emergence as one of the holiest place in the Christian world is largely because of its association with a holy relic of a man who died in 1552 in China.

Born in Spain and sent to India in 1542 by both the King of Portugal and Pope the third, Francis Xavier, spent 10 years in Goa serving leprosy cursed people and spreading the message of Christ. From 1510 to 1540, when Portuguese brutality over Indian masses was at its apex, he landed there as an apostle of peace and first gained confidence of local people by serving them. It was he who attracted a huge mass to Christianity that finally changed Goa to a very different demographic marquee in India.

After his death in China, his body which was still intact after many months of his demise, was brought back to Goa on March 14, 1554 and kept in a casket gifted by Queen of Portugal Maria Sophia in 1560 at Basilica de Bom Jesus. The relic is placed on the right wall of the church and can be seen from a distance.

This attracts thousands of pilgrims across the world. Every 10 years the casket is taken down and people are allowed to get a closer look of the relic.

Over a period of time, however, several distortions have taken place. One finger of its feet was vandalised by a lady in 1554 and the right hand of the body was sent to Vatican in 1914, as demanded by Pope himself. This was a year after Xavier was crowned as Saint.

Basilica De Bom Jesus is a gem of architecture and perhaps, the most famous Portuguese footprint in Goa. Its bare exterior, made of brown laterite, offers an irresistible charm to mingle with history. Built between 1594 and 1605 in late Rene structure, it blends Doric, Ionic, Roman and Corinthian style of architecture. The façade contains Jesuit motif embalm “HIS” an abbreviation of Latin “Iesus Hominum Salvator” meaning “Jesus. Saviour of Men”. The monument enshrines statue of St Ignatius Loyala and infant Jesus.

Cathedral, fort, lighthouse and old colonial buildings are now open to public and Government alike. The general panorama of old Goa runs like a motion picture visualising a saga much different from India’s general history. Even though Portuguese are long gone the profound footprints are alive in every edifice of Parashuram’s land.