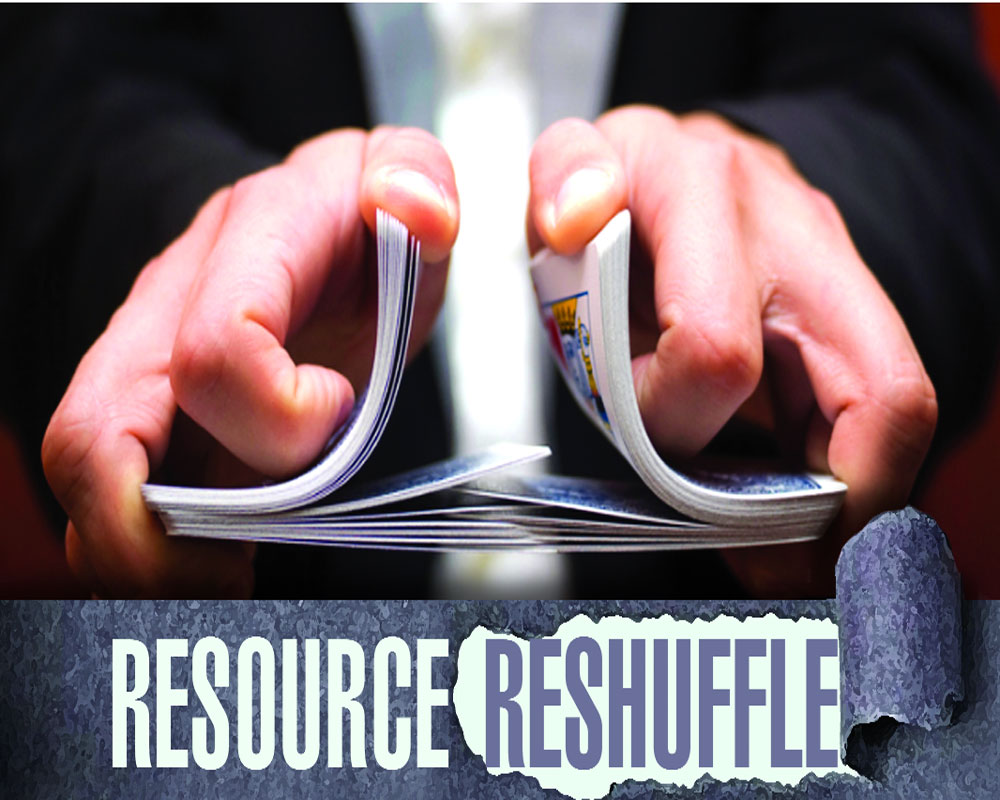 Redirect resources and skillsets to combat new challenges that are arising as a result of the current pandemic, writes Dr Somdutta Singh

In every adversity lies the seed of an equal or greater opportunity. So goes the age-old maxim by author and propagator of the modern genre of personal-success, Napoleon Hill. This adage also defines my perspective towards life, an adage I respect and abide by to delineate the forthcoming future, a future that today stands altered dynamically.

Now, for a minute, let’s cast aside the current Covid-19 pandemic situation and think otherwise. Irrefutably, we combat adversities in life from time to time. There are two discrete ways in which the human mind acts in response to such contexts. Some flourish and unearth avenues to combat the challenge, even as, for some, merely getting up in the morning becomes a dreadful chore. To the pessimist, adversity can mean despair, hopelessness and the unnerving feeling that things will never get better. The optimist always sees the glass half full realising that every hardship has a silver lining and looks into the future for the long-term consequences of their choices.

Now, let’s talk about the situation we are confronted with. The pandemic is deepening economic, political and social stress in 213 countries and territories globally. 24 million cases and rising even as I write this article. At least 8,30,000 people have lost their lives and the virus is wreaking havoc in every nation with flattening the curve a distant target to realise and no respite in sight.

Financial markets are plummeting, employment has taken a drastic hit, businesses across the globe are grappling to device viable strategies and structural shifts in the very way they function. Our healthcare workers and facilities are being so overburdened that doors are being closed to new patients.

In short, conditions are appalling.

On its face, when presented with the intensifying set of challenges, every country, every leader, every organisation had two options. To give into the crisis and be vanquished or rise like a phoenix from the ashes and knuckle down. While the former was not an option, it never has been for any for us, we knew while the road was going to be rough, we had to drive through and conquer the unconquerable.

Agreed, while people are losing their jobs at a rampant rate, there also are vivid evidences that show how employers, companies and businesses, both conglomerates and small enterprises are standing shoulder to shoulder with their workforces to ensure they are safe and sheltered from the tempest. They are ensuring and safeguarding that their teams and their families are protected. Survival is a basic human instinct, then why fear failure when you can embrace the learnings?

Clearly, once the screeches of the pandemic dwindle, the scale of what needs to be achieved is going to be truly staggering. So, here’s tip number 1.

There are undeniable lessons we could draw from our neighbour and manufacturing giant China. China’s success in building a globally competitive skilled workforce and transforming itself as the world’s manufacturing hub can be attributed to its technical and vocational education system.

Another country that India could draw inspiration from is Brazil. Despite tackling a difficult fiscal and economic situation, Brazil has developed rapidly over the last decade and a half in terms of employment and revenue. Strategic investments that prepared young people for jobs and entrepreneurship played a significant role in this growth.

This brings me to my next tip. By 2022, whilst India aims to create a resource pool of 500 million skilled workers, it will likely also surpass Germany to become the fourth largest economy trailing only the United States, China and Japan. Currently, India stands at a historical juncture, with enormous potential to procure rich economic benefits in the forthcoming decades. The rapid growth in the country’s population would be accompanied by an unprecedented demographic transition, with far-reaching consequences on economic growth.

We live in a world that’s technically mutating and quickly transitioning into a knowledge-based economy that demands a new generation of educated and skilled individuals. With half of India’s population under the age of 25, 2/3rd less than 35, (2) there’s a critical need for scaling up concerted efforts to enhance skill development in India. Despite having the world’s largest youth population, we are not fully capturing this potential demographic dividend — over 30% of India’s youth are NEETs — not in employment, education or training.

The next indicator I am going to talk about is crucial. India’s competitive edge will be determined by its citizens’ ability to create, share and use knowledge effectively in a global economy which is experiencing a broad-based cyclical upturn. An increasing proportion of skill developed population will provide a window of opportunity to improve labour productivity, increase domestic production, enhance revenue from services, increase savings and reduce the burden of old residents on the working population. This is highly significant because the two largest contributors to India’s economy, the services and manufacturing sectors need highly trained workers.

The above tip certainly needs to be backed with the next tip which is to elevate and strengthen the agricultural sector, the very backbone of India’s economy. We still are an agricultural economy, which ensures food security for the entire country. Over the years, the sector comprising a workforce of 220 million has been in enormous distress with productivity dwindling at a rapid rate and marred by farmer suicides. Training interventions in agriculture call for creating awareness about the need for skilling and upskilling rural youth and productivity enhancement that produce growth and sustainability. Additionally, the Food & Agriculture Organisation of the United Nations has declared if women had the same access to productive resources as men, they could raise total agricultural output in developing countries by 20% to 30% and reduce the number of hungry persons in the world by 12-17%.

Empowering and investing in women farmers is a pre-requisite to fulfill India’s vision of the Sustainable Development Goals that aims to end poverty and hunger, protect the environment, improve health parameters and empower all women. Their voices need to be heard at both policy and implementation levels if we are to realise the dream of a progressive nation. Women farmers in India perform most of the big farming jobs, from sowing to harvesting, yet their access to resources is less than their male counterparts. Closing this gender gap is essential in order to accelerate the pace of growth in the agriculture sector.

But, skill development alone is not going to matter unless it is complemented with employment generation, particularly when around 12.8 million people are entering the job market year on year. In order to accomplish this, and this is my next word of advice — there has to be an intensive focus on industries that are labour intensive and not merely capital-intensive, or technology driven. Instead of adopting a top-down approach, change should start from the grassroots preventing people from lurking in the dark when agendas are initiated.

Automation and advances in artificial intelligence is already altering the manufacturing and engineering sectors which promises to be the mainstay of the economy with more and more people coming out of farms. This brings to my next opinion. Our youth need to be imparted skills for jobs where humans will not be replaced by robots or algorithms like creative endeavours, healthcare, teachers, counselors, lawyers, analysts and skilled trained workers like plumbers, carpenters and electricians. We have to create an economy led by design, innovation, creativity and entrepreneurship to bring about a transformation. Strengthening the mid-market segment in India to create more jobs and re-skilling the workforce to take up the new jobs which will be emerging.

Here is my next tip. Evidently, apart from meeting its own demand, India has the potential to become the worldwide hub for outsourcing skilled manpower. India once poised as the global outsourcing hub is now viewed as a prospective supplier of world-class labour. As the global labour force approaches 3.5 billion in 2030, inequalities will continue to grow as lower skill workers face unemployment, underemployment and stagnating wages. Increasing globalisation and digital presence is resulting in greater cross-border outsourcing. There is massive need for global efforts to ensure a steady influx of high-skilled labour to meet increasing industry demands and avoid a global unemployment crisis.

Nonetheless, achieving this is a mammoth task that will require infrastructure, capital and changes to government policy. 600 million people will join the global workforce by 2030 with 60% of this populace emerging from China and India. This underlines the importance China and India, with the latter being touted as a forerunner in this race, in providing the global labour market with skilled, employable workers.

We have only 30 years to reap the benefits of the world’s largest youth workforce and in a globalised economy, a large pool of skilled workers is indispensable for attracting industrial investment including FDI. In light of this, here comes my subsequent purpose. A knowledge economy requires us to develop workers-knowledge workers and knowledge technologists-flexible, analytical — and become the driving force for innovation and growth. To achieve this, we need a flexible education system: basic education to provide the foundation for learning; secondary and tertiary education to develop core capabilities and core technical skills.

To my final thoughts: A young nation with a large digitally enabled middle class, India is breaking new ground across all segments. But, we need more solutions that are rapid, solutions that will make us self-sustainable and resource-efficient. Opportunities, both at home and overseas are boundless, but we need to build on our capacities in order to achieve macroeconomic stability. The math is simple. If we forgo building our skills and capabilities that will drive innovation, India will stagnate. GDP is merely a number, a synonym for the economic resources available for people to consume, for the standard of living and thus choices that are available. A north-bound GDP is not enough to ensure sustainable economic well-being of a nation or the health of its businesses.

We have to start thinking beyond sheer numbers. We have to think about transforming the way our economy truly creates value, address key societal needs and support a vibrant entrepreneurial sector thereby creating jobs. As the world increasingly confronts technological changes and sustainability challenges, I truly believe that India can offer an exemplar for other growth markets with the intellect, energy and creativity of a young nation that it possesses. With concerted effort rapid, equitable and sustainable growth is achievable.

The writer is CEO and Founder, Assiduus, an e-commerce brand and distribution company