Set up the sets

Set up the sets 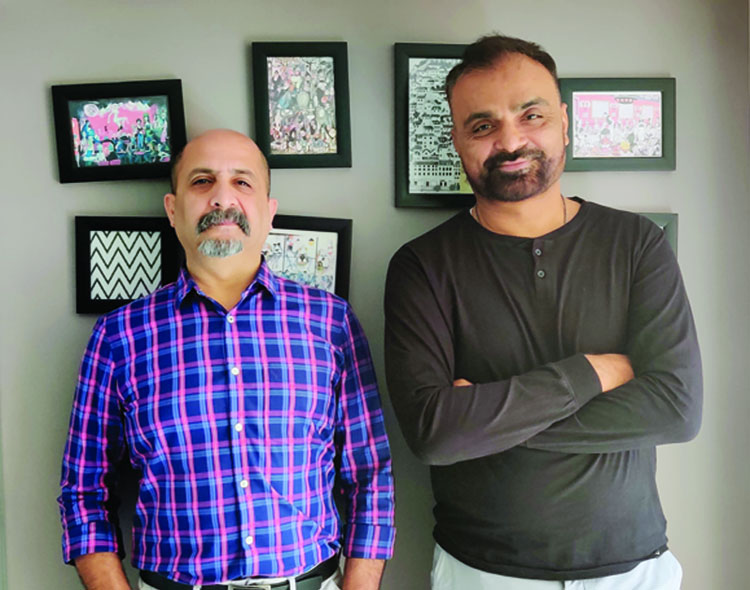 The pandemic has hit all sectors and film shoots is just one of them. MUSBA HASHMI speaks with SANDEEP A VARMA and RAJESH BUTTA  about how they came up with the idea of Filmboard, how will it help and its benefits, among other things

That film shootings or for that matter TV and web series shootings have suffered a hard blow from the pandemic is a no-brainer. Though the industry has started to get back on track gradually, a lot has changed in the process. Not that it has been any easier before, but COVID-19 has definitely added to the woes of the makers.

With limited cast and crew, a mandatory six-feet distance between people and a walk-in sanitising tunnel, a much dramatic movie scene has come to life today, all thanks to COVID-19.

What comes to the rescue during such a time is Filmboard, a brainchild of Sandeep A Varma, filmmaker and Co-Founder and Rajesh Butta, serial entrepreneur and Co-Founder, is sure to help you complete your dream project without much hassle and over-budgeting.

“Rajesh and I are BITS Pilani batchmates. That was 25 years back. After that our paths changed and we went ahead to pursue what we loved. I did a course in advertising and started making ad and feature films. Rajesh on the other hand remained true to his education and became a civil entrepreneur. We were habituated to complete the projects that we were offered on time and within the cost that we had only set for a particular project. So about 95 per cent of the time that did happen and the costs didn’t increase much. But when I came into filmmaking, most of my films went over  budget. I realised that this didn’t bother my filmmaker friends much because it happens with most of the projects, but for me it was intolerable,” Varma explains.

This hit Varma and he decided to do something about it. “The question that hit my mind was why did this happen and how we can sustain like this considering India is one of the largest film producing countries in the world and also the fastest growing. I had some ideas as to why it is happening and how it can be solved. Then  fortunately, I met Rajesh after many years at a college reunion. I spilled all my ideas in front of him. He had different perspectives to my idea and explained how technology and an extensive database can help sort this out. This is how Filmboard, a novel marketplace for filmmaking where one can find everything in their budget, was born in 2017,” Varma tells you.

One of the main reasons behind budgets going overrun, he says, is the lack of a professional approach in the industry. “When a producer plans a film or a series, he is sure about two-three factors which ultimately helps in the decision making process. One, he knows the director. Two, he knows what the script is about. Three, he knows who are the top actors in the project. But there is much more that goes into the process. This is all Above The Line (ATL) things where the producer is negotiating and making direct payments to the concerned people. Then there is Below The Line (BTL), that is provisioned on the set which includes, camera charges, food and logistics, art director and property charges and many others.

This provisioning is done by thousands and thousands of line producers who are operating individually all over the country. These people have no training at all. They are the ones who came into the industry to become actors or directors , don’t succeed , but since all the other fields including camera handling require expertise, they chose this field of work. The BTL part of the money is about 70-75 per cent of total budget. With these untrained people,   there is no transparency or a project management approach in the finalising of things. Hence, the budget keeps on increasing for several reasons, including poor camera quality, among others. Also, as per nationwide surveys, the BTL amount spent across all forms of  audio visual content across india exceeds 22billion $ annually. That’s a lot of money being spent in an unplanned way every year. “ he explains.

At Filmboard, he says, they have tied-up with national level brands for catering services, who will supply hygienic food which is untouched by human hands to the shoots, especially during COVID. “The perception will be that the cost of this branded food will be too  high. But, the reality is that the rates have been  negotiated by us and are of the same rates as of the local catering walas. In short, we are organising this process and putting it on one single platform for everyone to see and decide what to choose and what not,” Varma tells you.

Not only catering services, one can find everything from an actor, to spot boys and from producers to camera man at a single destination and at the price of their choice and budget.

Recently, they have also launched the COVID action plan via an app on their website to help simplify the process and not to mention within the allocated budget. “The app allows people to see if proper precautions are being taken at the shoot. There is an assigned officer who visits the shoots to check that all precautions are being followed. He then clicks and uploads a picture of the respective crew member on the app itself to verify it. To enhance the security, the photo option will redirect one to the mobile phone’s camera and the picture has to be clicked then and there, it can’t be hampered,” Butta tells you.

In case of any violations, Butta says, proper actions are taken against the offender.

Till date, they have worked with brands like Radio Mirchi, Gaana.com and Rebel Foods. “We have worked with big brands but on comparatively smaller projects. As we go forward, we  see us doing larger projects. In 2021, we  will be doing feature and animation films and our area of work will be focused towards OTT platforms,” Varma tells you.

There is much more on the duo’s cards in order to make the website better than ever. “This is the Version 3 of the website, but we will be going up to Version 5 and will revamp the website completely. For this, we have planned few technology-led innovations. One of them is AI-enabled auditions. In any particular audition, there is a queue of around 200 aspirants. From such a huge chunk, it is difficult to select one. Through this feature, AI will be shortlisting candidates on defined parameters, including voice clartiy and eye contact. About 70 per cent of the audition process can be done through this technology and the process becomes easier and less time consuming. The shortlisted contestants can then be decided accordingly, Butta tells you.