The cloth of the Mother Goddess

The cloth of the Mother Goddess 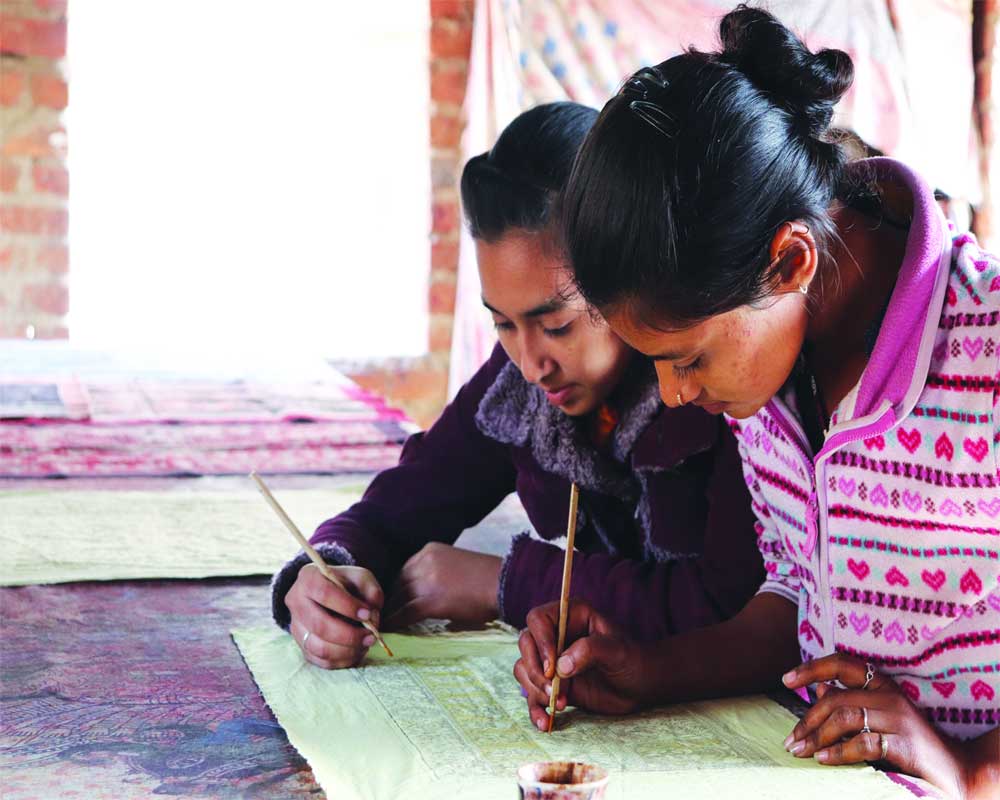 Themed around Devi, Mata Ni Pachedi is an 800 year old art form that the Chitara community is preserving in Gujarat, writes Sayali Goyal

Kirit bhai had a glint in his eyes as he spoke about his works being displayed at a museum in Japan. He had a dream, and he had his art. With the spirit of a true artist, it was Kirit bhai’s vision that made him stand out. About a 10-minute drive from the centre of Ahmedabad, the Chitara family stays in a humble village that is preserving the art and craft of Mata ni Pachedi, also known as Kalamkari of Gujarat. This is an art form that first emerged about 800 years ago when the Vaghri hunter community, excluded from the social system and prevented from entering temples of the Devi, started painting the goddesses on a sacred cloth that would be hung behind temples and worshipped. Through hand-painted drawings, they would share narratives from Hindu mythology and Indian folklore. Kirit bhai is an artist belonging to the 9th generation of this family. He shares there are some artists from the community in Pakistan too, as after the Partition, a part of Gujarat had been merged with Pakistan — specifically an area to the south of Karachi.

Meeting Kirit bhai happened as a happy accident, an unplanned mini-adventure, where I didn’t know what to expect. It was only the night before that I got to know about them and decided to visit them. Kirit bhai walked me through the lanes that led to his open-air workshop. The space didn’t seem to belong to the city. Layers of white fabric were laid on a bed that was used as a surface to paint. Rays of light highlighted the painted fabrics. Further, the layers of paint had given distinct textures to these underclothes, as if the white fabric was a soul carrying imprints of colour from all the figures that covered it. It was that hour when warm sunlight seeps through the misty cold of a January morning. Symbols of faith adorned the pink choona walls, and a cloth, used by the artists to clean their hands, was art on its own, perfectly imperfect. A few women from his family were working on a piece that depicted the Devi in a warfield. The mustards and reds of the natural dye gave the space a warm ambience, and merged into the colour of the brick walls.

I felt drawn to capture the soul of this place and the craft, and very importantly, the craftsman. His enthusiastic entrepreneurial spirit set him apart from many artists I’ve met before who are self-assured and seem to lack a vision for taking their art forward, and his honesty grounded him. He exuded a passion to take this little-known art form to an international arena. He shared his thoughts and feelings about his art without holding back , and these reflected his sense of pride and ownership. With an open heart, he invited me to his house and introduced me to his family. Over a cup of chai, we spent the afternoon conversing about this craft and its people. Soon the walls between us were brought down, and it was became an interaction between two storytellers, two creatives. I was happy he and his family treated me as an equal, and could trust me enough to feel at home with me.

Kirit bhai’s father had collaborated with institutions, brands and companies before. However, the artist had not received due credit from these collaborators, and this was something that bothered Kirit bhai. How important is validation for an artist? He wanted to put himself out in the world and show up as the face of this little-known art-form. A lot of questions came up for me at this point. What was the future of crafts? What was the true meaning of preserving crafts? Was it restricted to the tangible material and technique only, or was it equally important to include the stories and sentiments of a community and place? In this context, the craft becomes a tool that represents a community.

Kirit bhai also wanted to work with traditional methods and innovate them into wearable art, a thought fuelled by his aspirations for appreciation, recognition and remuneration. He had worked on a project to marry a Japanese kimono with this technique and had also received commissions to make scarves for a museum. He wanted more spaces like this to open up and revitalise this craft that he held so dear.

A craft also brings together a community. I sensed active and equal participation by the women in the family. Kirit bhai’s wife is an artist in her own right, and has a say in this art. I got the feeling that women were treated as equal collaborators in the practice of mata ni pachedi. Was it merely coincidental that throughout my journey of exploring crafts from the east to the west across India, I was meeting strong, resilient, creative women, and that this craft celebrated the Devi, a woman who was both feminine and the embodiment of Shakti? I spent a lot of time looking at the women artists working on this craft. I could not take my eyes off them. Kirit bhai’s wife, with her green eyes and golden skin, had a subtle external beauty; but I was drawn in more by her serene, luminous aura. As she worked, she seemed to have found her flow as an artist, that space we crave when we become one with our work and the sense of time dissolves. As I looked at the women painting, I thought to myself how for me it had been a year of Devis, where time and again I had come across independent, authentic and resilient feminine voices that had express themselves boldly through art. It felt like a celebration of womanhood, a restoration of equilibrium in today’s world of unbalanced energies. I was looking forward to meeting more of these women on my journey.

In Kirit bhai’s family, there are 20 artists who draw daily to create works that are commissioned by private collectors, galleries and some craft organisations. Sometimes it takes weeks or even months to complete a piece, thus making it quite expensive to produce and a challenge to sell for a fair price as well. Kirit bhai explains that the demand of the market and the fast-moving modern world used to immediate gratification have seduced many artists away from hand-painting and natural dyes; they use chemical colours and pre-carved blocks to make similar drawings. But, even with competition from these cheaper adaptations in the market, his family has chosen to be ethical and loyal to the art and continue to hand draw using natural dyes only.

He feels that Devi herself has given them this blessing to keep working with authenticity and take the true lineage ahead. It is the belief of his family that the Devi came in his grandfather’s dreams and encouraged him to start practicing this art form as a way to worship her.

I wanted to know more about the process and see a piece come alive in front of my eyes. Kirit bhai explained that red and black were colours most typically used to paint the mata ni pachedi. The artist holds a bamboo stick dipped in alum and mador (natural colour to achieve deep red) and begins to draw the picture from a mythical scene, for example Draupadi speaking to Arjuna from the Mahabharata. The artist follows their instinct on the cloth and slowly the piece comes into being. Apart from the central tale, little motifs are drawn and such smaller elements gradually fill in the empty spaces.

The Kalam (the bamboo stick pen) is dipped in natural ink and refilled from time to time. The piece of fabric is then boiled in water with mordants, that help it realise its true colours. Like the climax of a film, the piece that looked blackish is now reddish.

I feel strongly that the artist brings a little bit of themselves to every piece of art they create, and the art embodies the emotions of the artist as well. I saw a drawing started by Kirit bhai’s sister being completed by him. It was a seamless collaboration between two equals, brother and sister. This piece that has been worked on by different family members had a little piece of all of them. As I watched the painting come alive, I got a strong and palpable sense of community and collaboration through practice of an art-form that was visibly weaving these artists close together as a community.

One innovative piece really stood out for me. This was a wedding scene — that of Shiv and Parvati — and the use of indigo made it stand out from the ocean of reds and blacks.

For me, the human connection surrounding the art emerged larger than the art itself. After this encounter, I felt that the stories of artists needed to be shared parallely with the story of the emergence and practice of the art form, as that could be a way to preserve the tradition along with the craft. I came away with a desire to find ways to restore the inequilibrium in their world — the existing inequilibrium that does not duly acknowledge, appreciate and justly remunerate their art. I came away with the intention to consciously encourage fair trade through education and through bringing down the middlemen. One way of doing this was simply by buying from them, meeting them, encouraging them and sharing about them. Also, I felt that actually talking to artists and letting an artist know his worth — actually vocalising it — would help immensely.

Kirit bhai drew me a Devi with a sword and encouraged me to contribute my bit to it. I didn’t know what to do, and ended up by writing my name on it. This was something powerful I was taking back, a spirit of this Devi who held a sword, who represented strength but also was a mother — the mother goddess — and feminine. This was a precious moment and a memento I could frame, almost like a blessing, a reminder

The writer is the founder and cultural curator at www.cocoaandjasmine.com