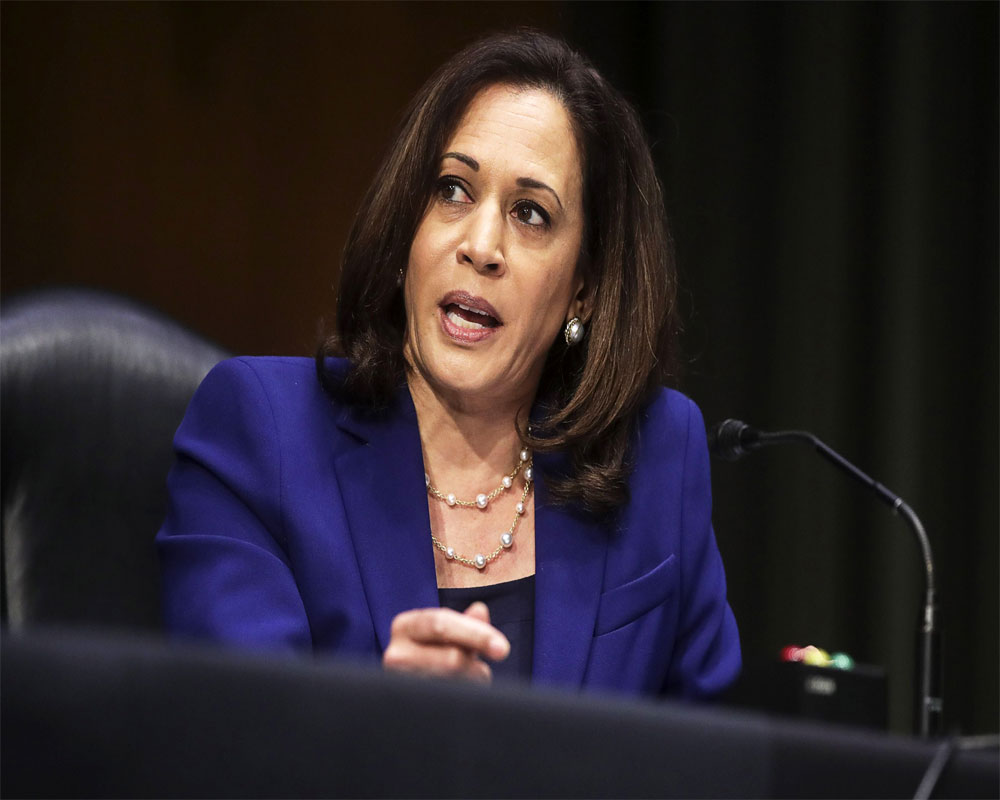 Kamala Harris urged voters on Monday not to be discouraged by Republican efforts to fill a Supreme Court seat before the election, charging it's the GOP's goal to make people feel like their votes don't matter.

We will not let the infection that President Trump has injected into the presidency and into Congress, that has paralysed our politics and pitted Americans against each other, spread to the United States Supreme Court."

Her remarks, delivered in swing-state North Carolina, marked Harris' most expansive yet on the vacant court seat that was held by Justice Ruth Bader Ginsburg until her death earlier this month. Beyond serving on the Democratic ticket, Harris will play a direct role in the confirmation battle as a member of the Senate Judiciary Committee tasked with vetting the nominee, a spot in which she's shined during past nomination fights.

The committee is expected to begin hearings for President Donald Trump's nominee, Amy Coney Barrett, on October 12, about three weeks before Election Day.

Democratic presidential nominee Joe Biden and Harris say the seat shouldn't be filled until voters choose the next president.

Harris noted early voting is already underway in some states, including North Carolina.

Republicans say this fight is different than 2016, when they refused to hold hearings on then-President Barack Obama's Supreme Court nominee nine months before the election, because the Senate and presidency are now held by the same party.

But the Senate has never confirmed a justice to the high court so close to an election.

You have the power and you can make it very clear, very soon how you feel about being cut out of this Supreme Court nomination process," Harris said.

She centered her speech on ways the court can influence Americans' lives: an expected ruling on the fate of the Affordable Care Act, the preservation or elimination of voting rights, and a broad swath of other matters, from the right to collectively bargain to due process.

The court is set to hear a challenge on the Affordable Care Act shortly after the election, a key talking point for Harris and Biden as they seek to motivate voters concerned about losing their health care.

Harris zeroed in on what it means for women in particular.

Without the health care law, she said, birth control coverage could be eliminated and pregnancy could be considered a preexisting condition by insurance companies. Suburban women were key to Democrats' taking back the US House in 2018.

She also charged Republicans' relentless obsession with overturning the Affordable Care Act is driven entirely by a blind rage toward President Obama."

Harris avoided any personal attacks on Barrett and did not mention her Catholic faith, instead focusing on her past comments that Chief Justice John Roberts erred in a previous decision upholding the Affordable Care Act.

That court blocked the law and the Supreme Court declined to hear an appeal.

Harris delivered her remarks at Shaw University, one of North Carolina's historically black colleges and universities.

The university in Raleigh was where the Student Nonviolent Coordinating Committee, a key organisation in the civil rights movement of the 1960s, was founded.

Monday's trip marked Harris' first to North Carolina since joining the ticket. She also plans to meet with Black voters as part of a sister to sister" organising campaign.

Harris is the first Black woman to be on a major party's presidential ticket and has focused on mobilizing Black voters since joining the campaign.

Trump won the state in 2016 and he's recently visited weekly.

Many of the voters Trump hopes to win over are more focused on the coronavirus pandemic and related issues than on the Supreme Court seat.