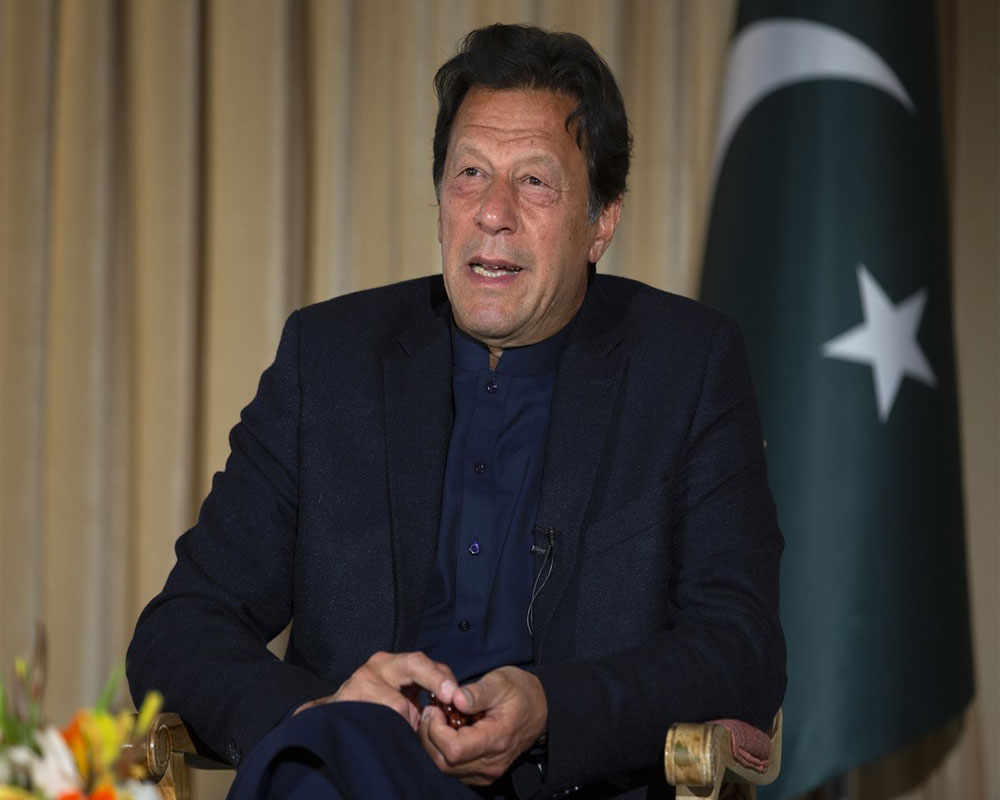 Pakistan Prime Minister Imran Khan on Saturday lashed out at three-time former premier Nawaz Sharif for accusing the army chief of rigging elections and installing a "puppet government" in Islamabad.

Sharif, the 70-year-old leader of the Pakistan Muslim League (Nawaz) who was ousted from power in 2017 by the apex court on graft charges, on Friday for the first time directly named Army chief Gen Qamar Javed Bajwa and ISI head Lt Gen Faiz Hameed for interfering in the elections of 2018 to ensure victory of Imran Khan.

Hitting back at Sharif, Khan said on Saturday that the PML-N supremo came to politics by "polishing General Zia's shoes" – a reference to Sharif joining politics in 1980s during the martial law of then military dictator General Zia-ul Haq.

Khan said Sharif opted to use negative language against the army leadership at a time when soldiers were sacrificing their lives for the nation.

"Why are they sacrificing their lives? For us; for the country. And this jackal who ran with his tail between his legs used such language for the army chief and DG ISI," Khan said.

The powerful army, which has ruled Pakistan for more than half of its 70 plus years of existence, has hitherto wielded considerable power in the matters of security and foreign policy.

Khan said that Sharif took "crores" of rupees from Meeran Bank in late 1980s to fight elections against Benazir Bhutto of the Pakistan Peoples Party (PPP).

"This is the man who put (PPP co-chairperson Asif Ali) Zardari in jail twice. It was Zardari who instituted the Hudaibiya Paper Mills case against him (Sharif), not General Bajwa,” said Khan.

Commenting on the joint rally of the opposition parties, Khan termed it as a "circus".

He also targeted PPP Chairperson Bilawal Bhutto Zardari and Sharif's daughter Maryam Nawaz, saying the two "children" who have never worked for an hour in their life and lived by using the “ill-gotten gains of their fathers” were making speeches.

Khan said these leaders would even sell the country to protect their wealth that they amassed through illegal means.

Addressing the PDM rally in Gujranwala on Friday, Sharif said: "(Army chief) Gen Qamar Javed Bajwa ended my government. He rigged 2018 elections and imposed incapable Imran Khan on the nation. Gen. Bajwa is a direct culprit and he will have to give an answer to this."

"You can label me a traitor if you want, seize my properties, file false cases against me but I will continue to speak for my people," said Sharif, who is facing multiple corruption charges and is currently on bail.

This is not the first time that Sharif has gone after the military leadership. During the opposition's multi-party conference last month, he had bitterly criticised the army, saying there was “a state above the state in the country”. However, he had refrained from naming anyone.

The PML-N leader, however, made it clear that he was not against the army but some individuals who violated the Constitution.

Since his anti-army rant, the federal government has banned the media to broadcast Sharif's speeches.

The Opposition parties are openly protesting against the military's interference in politics and elections for the first time in the recent history of the country.

Sharif has been living in London since November last year after he was allowed by the courts and the government to go there for a period of eight weeks for medical treatment. But he did not come back, while his lawyers told the court that he was still recovering.

The Islamabad High Court through newspaper advertisements has asked Sharif to appear before it by November 24 to avoid being declared a "proclaimed offender".