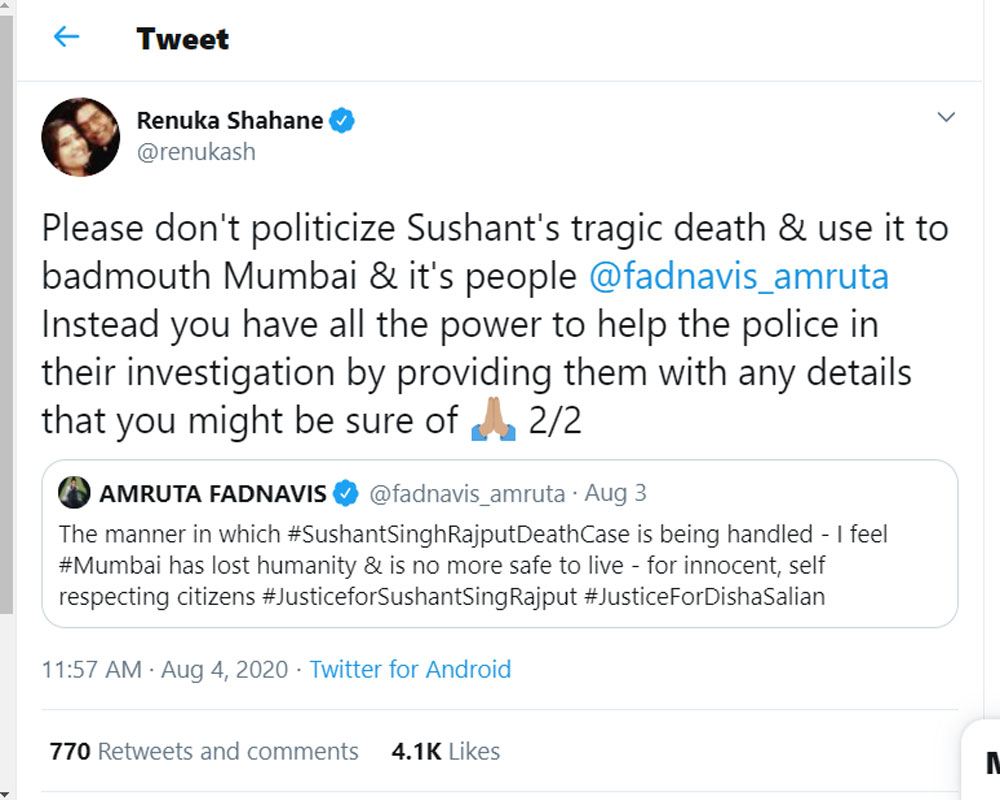 "This is really unfair to a city that feeds and homes millions. However tattered the roof or blanket, Mumbai gives residents a reason to hope, dream & smile even without Z security. @MumbaiPolice have been working tirelessly to keep us safe even during covid," Renuka tweeted on Tuesday in response to a tweet posted by Amruta.

"Please don't politicize Sushant's tragic death and use it to badmouth Mumbai and it's people @fadnavis_amruta. Instead you have all the power to help the police in their investigation by providing them with any details that you might be sure of," the actress wrote in the second part of her post.

Amruta had earlier written: "The manner in which #SushantSinghRajputDeathCase is being handled - I feel #Mumbai has lost humanity & is no more safe to live - for innocent, self respecting citizens #JusticeforSushantSingRajput #JusticeForDishaSalian."

A few among Twitterati, however, reacted on Renuka's post saying they did not see anything political in Amruta's statement.

"When Mumbai Police and Present Government are hiding facts and trying to save criminals, Everyone should speak up.

Renuka replied: "There is! If she were the CMs wife she wouldn't make such a statement about Mumbai, whatever the circumstances. Remember Elphinstone bridge collapsing during @Dev_Fadnavis tenure? Many Mumbaikars died but she did not say anything about Mumbai not being safe or being heartless!"

The actress noted that the investigation into Sushant's death has to be conducted "without pressure, either from media, politicians or whoever. If it was suicide & there was abettment we must bring the perpetrators to justice. If it was a murder, the murderers must be caught. But this Bihar v/s Mumbai nonsense isn't helping".

Sushant was found hanging in his apartment on June 14. The post mortem report stated that the actor committed suicide. Mumbai Police has been investigating the case. Following an FIR lodged by Sushant's father KK Singh in Patna on July 25, Bihar Police have also started a probe.