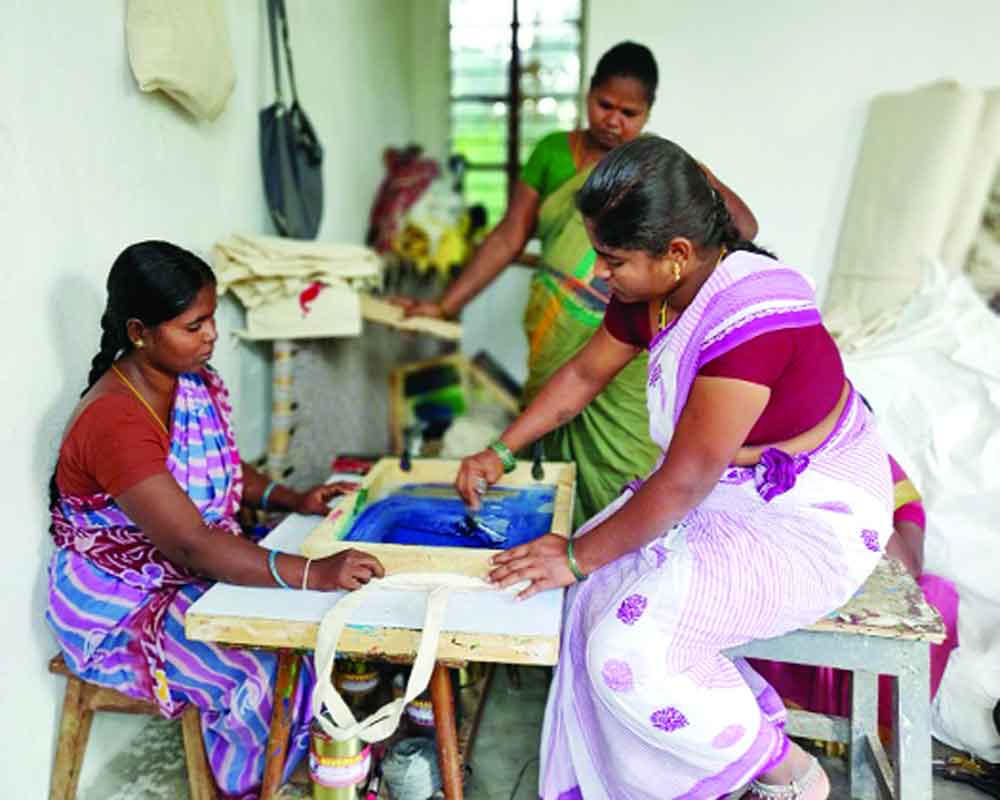 Plastic ban strengthens the role of women in the informal sector by generating alternative employment opportunities for them, says Aparna Deswal

In June 2018 the Indian government announced that it was mandatory to eliminate single-use plastics by 2022. Last year, there were speculations that the first big step in the fight against disposable plastic would be taken on October 2, Mahatma Gandhi’s 150th anniversary. However, the government shelved the plan to outlaw single-use plastics on the occasion saying that it “would have been disruptive for the industry at a time when it is coping with an economic slowdown and job losses.” As a part of the campaign, 18 states have imposed a complete ban on plastic carry-bags, while five others have a partial prohibition at religious and historical places in place according to the Central Pollution Control Board (CPCB).

Considering that India generates about 2,600 truckloads of plastic every day, this is a positive step for the protection of the environment. As all the states are now looking for alternatives to plastic bags, this ban has created job opportunities in new, largely informal sectors, especially in the rural belts.

In the small town of Kishangarh (also known as Madanganj) in Ajmer district, Rajasthan, the ban on plastic bags has enabled women to be financially empower themselves. The ones residing in the Dungri Mohalla of Kishangarh, work as daily wage labourers in some of the toughest conditions in the informal sector. After toiling for eight hours, they were getting a meagre amount of Rs 250. Tired, they would return home, to cook food and take care of their families. Next day, they would go in search of work again.

In 2010, Rajasthan government had declared the state to be plastic free. The strict instructions, in recent years, by the Green Tribunal and the Rajasthan High Court, have ensured that people across both formal and informal sectors have given up the use of plastic bags. This, over the years, has led to an increase in the demand of bags made out of cloth providing job opportunities to many women.

In the last four to five years, women in the Kishangarh Mohalla have been sewing cloth bags to fulfill this demand. The businesspersons get rags and waste cloth from Surat textile industries in Gujarat and outsource the work to these women to sew bags. Offered Rs 15 for one kilo of cloth bags, these women can earn a maximum Rs 200 a day. This alternative source of income also allows them to work from home and look after their families. Though the rate is low as compared to what they got work they did earlier but working from home compensates for it.

“During the winter season, we get a lot of home-based work like tailoring, embroidering, peeling garlic and peas, chopping vegetables and packing. But sewing of cloth bags comes to us regularly irrespective of the season,” shared a 35-year-old Manju Regar who earns Rs 100 on an average per day while working at her own convenience from her house.

Women find this work not only convenient but also dignified as compared to the work they did as daily wage labourers and domestic helps. Through this they are able to support their families financially without compromising on their health and self-respect. They also believe that since the future has to be plastic-free, the demand for cloth bags will definitely increase, which in turn would increase their chance of getting permanent employment. Achuki Bai, who is 65-years-old, has worked hard for her entire life but has never been rewarded. Sewing cloth bags has enabled her to make money which satisfies her.

Another woman, Geeta Manoharpuriya, works with a non-government organisation. Her other women family members are involved in sewing cloth bags. She shares that they enjoy this work because of the freedom it offers, without any interruption, deadline and any negative impact on their health. They don’t even require any special training for it.

The ban on plastic bags has certainly created new work opportunities for women. Since it will take some time to ban single-use plastic all across the country, this time can be utilised to build skills of such women so that they can become more efficient. This will not only show our preparedness to effectively replace plastic with environment-friendly options but also strengthen the role of women in the informal sector.