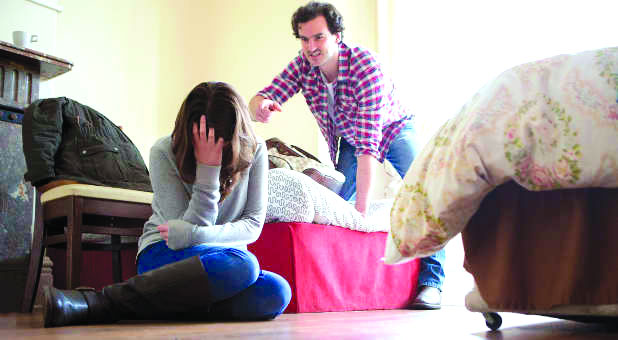 While physical abuse cases may have gone down, domestic violence has shown a steady rise amid Coronavirus lockdowns, reports Shalu Agarwal

Violence against women at any time is unacceptable. Amid lockdowns imposed worldwide due to Coronavirus pandemic, cases of domestic violence across the globe have seen a spike says Tedros Adhanom Ghebreyesus, director general of the World Health Organisation (WHO). Asking women who are tormented to save themselves anyway they can, he also tweeted recently, “Sadly, there are reports of increase in domestic violence since the #COVID19 outbreak began. We call on countries to include services to #EndViolence as an essential service that must continue during the response. There is never any excuse for violence.”

In the UK, as reported in a national daily, more than 25 organisations, working for domestic violence victims, have reported an increase in their caseload since the start of the virus spread in the country. In India, according to a monthly magazine, the National Commission for Women (NCW) has also observed more than two-fold rise in gender-based violence in the country during the Coronavirus lockdown. From 116 cases in the first week of March, the total number of complaints by women rose to 257 in the final week (between March 23-April 1), out of which 69 were of domestic violence. As per Rekha Sharma, chairperson, NCW, the cases of domestic violence are higher in Uttar Pradesh, Bihar, Haryana and Punjab. These are the states where maximum cases have been reported by women who could reach NCW through different platforms and narrate the torture. However, she pointed out that the actual number must be even larger because there would be many women who are unable to report because of the fear of torture they face from their husbands and in-laws. Well, one cannot even imagine the rise in the total number of cases if every woman in remote corners of India is given easy access to report such crimes without being scared of their harasser.

Before the lockdown, a report released by the National Crime Records Bureau (NCRB) in January 2020, revealed that domestic abuse topped the list of violence against women in 2018. Out of the total crimes registered under the Indian Penal Code (IPC) against women, 31.9 per cent cases registered were listed under the ‘cruelty by husband or his relatives’. The same report claimed Uttar Pradesh to be the most unsafe place for women as 59,445 cases of crime were registered from the state in 2018. Of these crimes, 2,444 were registered as dowry deaths, while 284 cases as abetment to suicide of women in the state. The NCRB data from 2016 to 2018 indicated that Ghaziabad and Meerut districts in Western UP have maximum number of cases registered, which also included murders of wives by husbands.

“It all starts with arguments over petty things that soon transforms into ideological differences that destabilises the harmony between a married couple. Most men grow intolerant towards their partner speaking against them. They lose patience and with the objective of punishing them, they end up killing or torturing their wives,” shares Dr Kashika Jain, a  psychologist.

According to Atul Sharma, a social activist, the crime statistics in Western UP are extremely frightening. “Both police and administration have to take serious steps to control the crime rate against women. Killing of women by their husbands and relatives is utterly disgraceful and unacceptable,” he adds.

Another factor that has resulted in the increase in numbers is that due to the lockdown, both men and women are unable to move out of their house to find some solace away from the monotony. Ideally, when a husband beats his wife, the woman finds comfort in her parents’ home but now she is unable to head even there. Men, on the other hand, are facing salary cuts, many have already lost their jobs and are anxious about the future. As a result, they are venting their frustration on women.

Ayushi Jain, a social development practitioner, says, “In dysfunctional households, spending time outside the house is a tried and tested method of avoiding violence at home. On one hand, going out allows men to take out the ‘built up anger’, on the other, for women, it’s a way of diffusing the intensity of what they are going through by getting in touch with the outside world, possibly seeking support through community gathering or counselling.” She believes that in the current situation, the ways to vent the growing tension are severely limited because there is more confrontation between the two parties during the lockdown, which substantially increases the violence.

Besides the NCW, many non-profit organisations have intervened in the situation and have started providing online counselling to such cases. Many have also issued guidelines on social media to educate people on ways of intervening in cases of domestic violence around them without jeopardising the life of the victim. However, women who have absolutely no information about how to access such platforms still remain vulnerable. With the lockdown having been further prolonged, the concerned authorities and NGOs are working to help the victims of domestic violence due to the growing need to take stronger initiatives, especially in smaller, more staunchly patriarchal regions like Uttar Pradesh and Bihar.