For the love of history

For the love of history 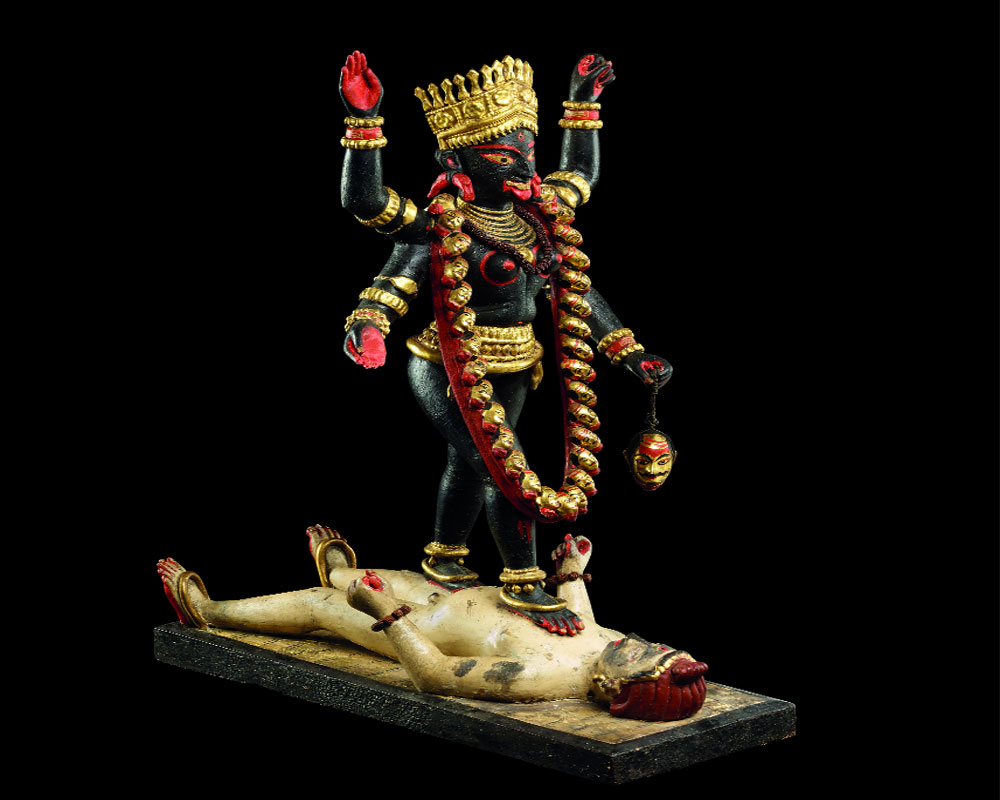 Presenting masterpieces of sculpture, painting, prints and ritual objects from India, Tibet and around the world, an exhibition on Tantra offers new insights into an age-old philosophical theory, says Uma Nair

A tantalising exhibition on Tantra, a greatly misunderstood word that has been tossed into the realms of sexual ardour by the West, but the British Museum creates an epic sojourn in art history by bringing together sculptures, prints and paintings as well as a stunning recreation of the famous Chausathi Jogini Mandir in Hirapur just outside Bhubaneswar.

According to the curator Immos Ramos, from its inception to the present day, Tantra has challenged religious, cultural and political norms around the world. A philosophy that emerged in India around the sixth century, Tantra has been linked to successive waves of revolutionary thought from its early transformation of Hinduism and Buddhism to the Indian fight for independence and the rise of 1960s counterculture.

Centering on the power of divine feminine energy, Tantra inspired the dramatic rise of goddess worship in medieval India and continues to influence contemporary feminist thought and artistic practice. Presenting masterpieces of sculpture, painting, prints and ritual objects from India, Tibet and around the world, this exhibition offers new insights into a philosophy that has captured our imagination for more than a millennium.

History and the love for collectibles combine when you run your eyes through the objects on display — four of the earliest Tantra manuscripts, made in Nepal around the 12th century and loaned by Cambridge University Library are stunning. The curator highlights the importance of divine feminine power and challenges the perception of womanhood as passive and docile. But there is more to showing fearsome goddesses trampling over fragile men. Intoxicating perhaps is the  9th-century sandstone temple relief from Madhya Pradesh depicting the ferocious goddess Chamunda dancing on a corpse. Historians have noted that in the 19th century, Tantra became a tool for Indian revolutionaries fighting the British colonial rule with goddesses such as Kali, becoming the symbol of independence.

Among over 100 objects, including the masterpieces of sculptures, paintings, prints and ritual objects, depicting the history and evolution of tantric philosophy since AD 500 — the works of Indian artists are important.

Among Indian practitioners of Tantra moving into contemporary fields of Neo Tantra were Ghulam Rasool Santosh. He worked within the Purusha Prakriti principle. His painting has an equivocal tenor because it combines yogic powers of transcendental meditation with the form. The philosophy is what ignites our awareness and awakens us. Purusha is the soul, the self, pure consciousness, and the only source of consciousness. The word literally means “man.” Prakriti is that which is created. It is nature in all her aspects. Prakriti literally means “creatrix,” the female creative energy. Santosh uses this in his human form to bring alive the energy principle, which holds that purusha is infinite, eternal, omniscient, unchanging, and unchangeable. But Prakriti is what holds materiality and dynamism, constantly changing and evolving.

Biren De’s luminous penumbra hails the concentration of the chakra, it is his exploration into higher realms that evokes many a moment of deeper intensities. Mahirwan Mamtani, another master in the field of Tantra, known for his magnificent human faces, is not about the lower chakra, it is the union of a higher self. Mamtani’s work in the collection of the British Museum is a hybrid creation with an inner rootedness.

History states the development of Tantra in medieval India coincided with the rise of many new kingdoms across the subcontinent after the breakdown of two major dynasties, the Guptas in the North and the Vakatakas in the Southest. Along with political precariousness, there was a great flourishing of the arts. Rulers were drawn to Tantra’s promise of power and public temples often incorporated Tantric deities as guardians.

Tops among contemporary practitioners is Bharti Kher’s headless sitting on her haunches figure with a tea and saucer in one hand and a skull in the other. While the benevolent slept, 2008 stirs you out of your skin. The power and the pathos both intermingle to ask you uncomfortable questions. This is not a pretty woman, this is a woman of strength. Her hands holding two objects, that suggest a slow genes, is a cultural interpretation that weaves Hindu mythology, tantric painting and found objects together in a sweeping ode to selfhood. This sculpture with those straw-like long projections slice through your senses with fine-tuned resonance. Kher is telling us that there is a collective need for answers following further questions. Kher also points to angular junctures of mismatched belief systems as she pairs multiple compositions with more materially complex, confrontational sculptures. This sculpture fits into the modern mould of women artists, who create after deep rumination.

Ramos says Tantra has a continuing relevance. “Gender, female power, gender fluidity, religious pluralism, mindfulness, well-being... These are all topics that are very much part of contemporary discourse.”

She excels and extols with her mesmeric work. Housewives with Steak-knives 1985. This image has a stark but poetic resonance, concerned with the relationship between art and politics, and questions of subjectivity in relation to identity, gender and race. She draws on temporal relationships between myth and reality, as spatial opposites, she questions the concept of time itself, and what this constitutes in relation to histories and to the everyday idiom of a woman in society.