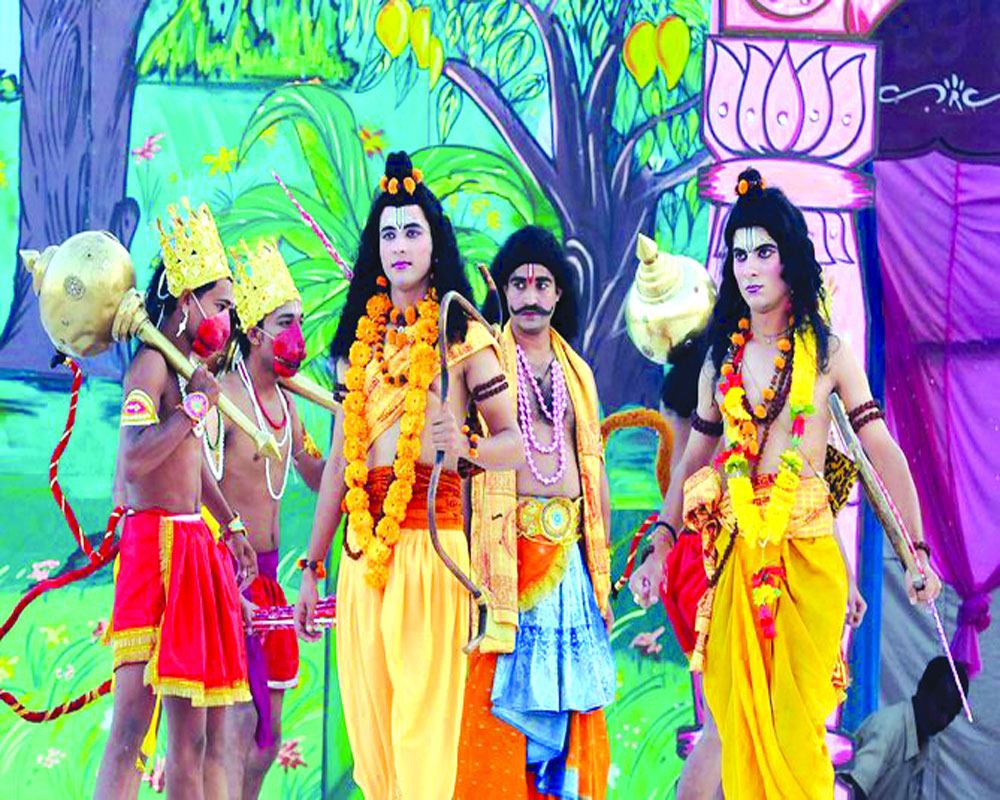 With most organisers getting permits late, they have decided to do away with the physical form of Ramlila. Some are recording at venues for a phygital experience. By Team Viva

This time, there will be no merry-go-round, no cotton candy or shoot-the-balloon stalls in the expansive grounds as you watched Ravana stomp the stage in the distance. Neither is anyone reciting the Ramayana nor is a Bollywood import being brought in to portray Lord Ram. Did you ever imagine your navratras, the time that marks the beginning of festivities in India, to be so dull? Especially, when just a year ago, the vibe in the capital around this time was so different with episodes of the epic being played out in each neighbourhood. The virus has changed all that. The question then arises is why are traditional Ramlila committees not risking it although the Delhi Government has given the nod for setting up low-key celebrations, listing the necessary safety guidelines and protocols. Ashok Aggarwal, President, Luv Kush Ramlila Committee, says there is just too little time to put together everything. Besides, COVID protocols mean more expenses and without sponsorships, the budget has forced many committees to revise their plans.

Aggarwal says that he expected at least two months prior information from the authorities so that things could have been carried out smoothly within time. He adds, “Every year, we apply for our programme during January-February, and this year too, we did the same. I understand that there’s a pandemic at hand but the government should have told us about the permit well in time. I got my ground booking letter the day before yesterday. How can they expect us to do the arrangements at such a short notice? COVID-appropriate management means a huge preparatory drill. There is no time for that scale.”

Mahadeb Das, founder member of Paschim Vihar Bengali Association, argues that given the pandemic, organisers should have been given permits long before to manage the  show in the new normal. “Preparations begin at least two months or one month in advance. The stage, seating area, costumes, make-up, props and a lot of other minute details are taken into account, which demand time. And this year, we needed extra time to act as per the new normal with proper sanitisation and social distancing arrangements. However, that was not the case. And now, we are left with no time and would rather not pose a public health risk,” says he.

Aggarwal shares that the committee’s suggestion of streaming Ramlila live online wasn’t even taken into consideration. “Wrong move!” he laments.

However, with no Ramlilas taking place, there is Shriram Bharatiya Kala Kendra (SBKK) which doesn’t want to give a break to their year-long tradition. This time, too, it is organising its dance drama on Lord Ram, directed by Padma Shri Shobha Deepak Singh. “We noted earlier that the government would give the permission to hold Ramlila with necessary precautions and social distancing. So we were ready with our stage, lighting, costume, choreography and every other detail,” says Singh, who was personally sure about the government’s decision as she claims herself as optimistic.

Right from the preparation and seating arrangement to safety and sanitisation, a lot has changed under the shadow of the pandemic. “We ensure that all our members are COVID negative, be it the backstage crew or the actors on stage. The show is directed in such a way that physical contact is minimal. The choreography and seating arrangement is done keeping social distancing in mind. We sanitise the whole set at regular intervals. Welcome to the new normal,” says she.

Just as 2020 is turning out to be the “digital year,” festive events are also taking that route. The Sanskriti Kala Sangam has decided to go digital for the first time and has been shooting scenes for two days on the Yamuna bank. Singh, too, has agreed for the first time to record this year’s Ramlila at SBKK. “It’s important to be in sync with the changing times. We had earlier thought of an alternative in case we didn’t get the permission. It was to record the whole performance and upload the video on YouTube. Even now we’ll go ahead with this plan; the editing work is in process,” says she.