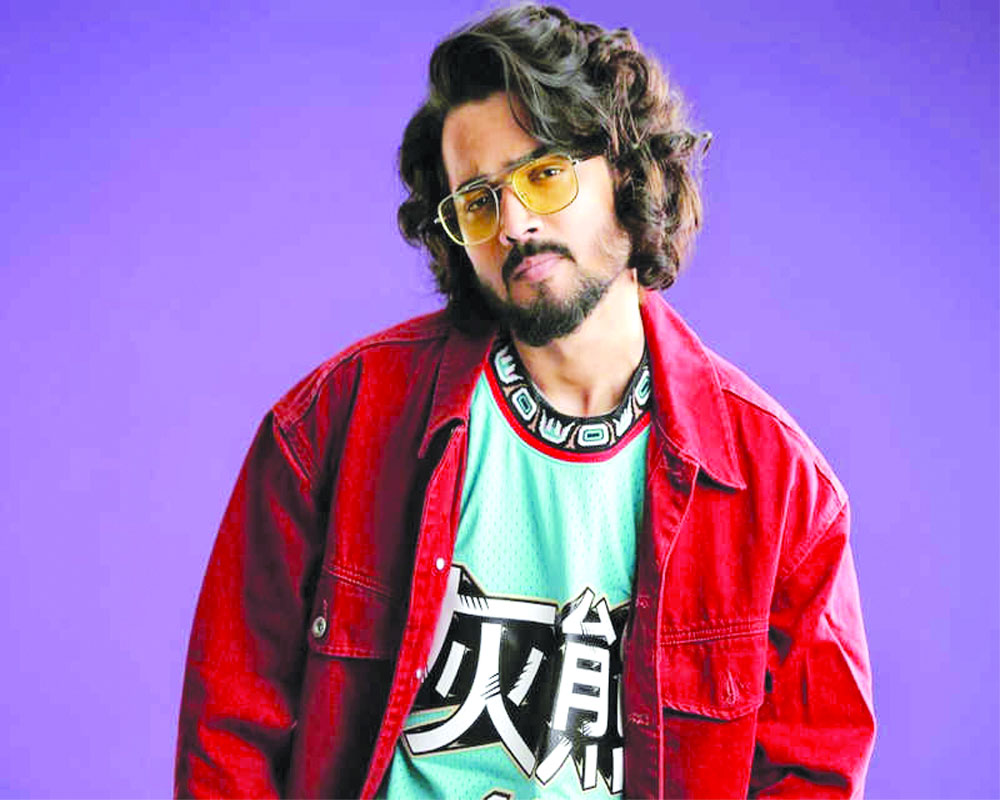 YouTuber and singer Bhuvan Bam finds most of his content by picking on the quirks of people around him, says Saimi Sattar

Lockdown = Soaring demand for internet content for both entertainment and information. But more often than not, these have become the tools for spreading falsehood and myths. YouTuber and singer Bhuvan Bam, who’s BB Ki Vines has 16.7 million subscribers on YouTube, has come out with a video to tackle both. It is called ‘Time to be a Hero’ and focusses on the WhatsApp forwards being circulated about Coronavirus. Says Bhuvan, “This has been going on in my head for a long time. In my own house, I see my parents sharing fake news on WhatsApp because they think it is legit. If this is a scenario in my house, then how many families are there who actually believe this?” So he decided to collect all the fake information related to Coronavirus and compared it with the reality in a 4.05 minute video. The video, which lists out the do’s and don’ts while providing the links to WHO and Ministry of Health and Welfare site in a conversational manner, a style which the artiste is known for, has garnered eight million views within three days.

Not just falsehood, Bhuvan also feels that there is always the possibility of a message being misinterpreted which happened with the Prime Minister’s address calling for a lockdown on March 22. He says the message needs to be spelled out to coherently. “I immediately thought that when he asked for a Janta Curfew on Sunday, we are a billion people, many of whom believe everything. He could have specifically emphasised that you should not be stepping out post 22 too as we have to be spoon-fed. The mindset is that if we have to beat the thali or clap, we will do it together. The gravity of the situation was lost on most as many thought that the disease is spreading in China or Italy or even in another Indian states and there is a border, so it cannot cross that. You don’t know who is travelling where and who has brought which virus. People are underestimating the situation,” he asserts.

However, now with people staying at home, there is naturally an explosion in the demand for content. Bhuvan feels that this is a golden opportunity for YouTubers to create content and share it, though he lists out a prerequisite. “The creator has the responsibility that if s/he is creating a seven-minute comedy, then s/he should also create an awareness video for the audience as they will listen to that too even if they don’t comply with it in entirety,” he says. Of course, there is the possibility that the repetitions from different people might be irritating for the audience but “it is the only way to reinforce the message.” He goes on to point out, “The YouTube community is a vast market and each of the creators can do it in their own typical fashion.”

Time and again we have seen comedy being used effectively for discussing a social issue. It has been explored and utilised widely in films, series as well YouTube videos. Bhuvan too believes in the efficacy of the genre. “If you look at my channel history, whenever I do a social issue, I try not to sound preachy. I have 18 characters in BB Ki Vines, so I can put across my views in the form of a conversation which makes it effective. The message given out as a comedy always registers better,” says Bhuvan who before the lockdown had just started working on his dream project, Dhindora, about which he refuses to divulge much information.

A genre of comedy that has come into its own in the past few years in India is the one which takes a political stand. However, for Bhuvan, every art form is like an opposition. “Someone can voice their opinion and dissent through music or through stand-up or through painting. The political views for or against any issue are always there and artistes reflect it. What has made it really popular in India is that the younger generation is taking politics seriously. Earlier, elderly people discussed it occasionally over tea. That way, it is a refreshing change,” he says.

However, scrolling through his channel reveals that there is nothing which would qualify as a political satire or comedy. Bhuvan laughs as he says, “I personally don’t like getting into politics. I know very little about it and half knowledge is the worst. And you should not speak if you have one-sided or half-baked opinion. Politics is not my cup of tea.”

While political content might be absent, BB Ki Vines is replete with cuss words and that is often the reason why it has received a lot of flak. Moreover, very often, while the audience might enjoy a particular episode, it is wary of sharing it further unless it is with a group of friends. Bhuvan is upfront and says, “I am from Delhi and let that be the end of discussion.” He goes on to explain the content that he puts out, “If someone follows my channel closely, they know that the cuss words are there when three friends are together or if Titu Maama makes an appearance. Truth is that my friends have never talked without using slangs. And this is true for every friend group across the world. It is a part of our life. The only difference is that I am a little transparent while others are hiding it.” He believes that it is nothing but “sheer hypocrisy” when people profess to be fans of Russell Peters or claim to have enjoyed American Pie or Euro Trip but are critical of the content that he puts out. “I am not showing nudity or anything. If someone is criticising me for my choice of language, it is nothing but sheer hypocrisy,” he asserts.

While India and Indians might be critical of the content being put out, for Bhuvan, the country and its people have acted as a source of inspiration. “The country is chalta phirta (fertile ground) meme material. Everyday, a lakh people can create a thousand different videos on different topics because there is so much comedy and content happening around us. India still wouldn’t run out of content,” says Bhuvan, who works on observation which the lockdown has put on hold for a bit. To apply this in practice, the YouTuber travels in the metro and sits in a random coach. “When I look at people, I see how they behave and pick at least one trait. Observation is important and we need to be aware and alert to everything around you,” he says.

However, comedy and YouTube videos was not what he had set out to do, though he had his heart set on being a performer from the very beginning. Bhuvan used to sing at a restaurant in Delhi when he saw a news story, which had a TV reporter interviewing a woman during the Kashmir floods. “Her son had disappeared and the reporter was asking, ‘Kaisa lag raha hai aapko aapka bachcha baadh me gayab ho gaya? (How do you feel as your son has disappeared during the floods?)’ She replied, ‘Kaisa lagega? (How will I feel?)’ I thought this is typical Indian news and an Indian reporter. I made a video about it and posted it on Facebook as at that time, I was unaware that I could use YouTube for this. I thought it was primarily for film trailers. One of my friends told me to separate the videos from my musician profile, so I made a Facebook page called BB Ki Vines. It caught on by word of mouth and people started following me,” recalls Bhuvan who still finds his escape route in music as he tells us, “When I am done writing jokes and creating content, I play the small keyboard that I keep in my room. That is how I get out of stress and anxiety.”

However, he has spread his wings beyond music and videos and even acted in a short film, Plus Minus. Bhuvan happened to be in the right place at the right time to bag this. “I was lucky to be in that room when director Jyoti Kapoor Das and the producer were discussing that they were planning a story on Baba Harbhajan Singh. He is the soldier, who, it is believed, continues to guard the Indo-China border, long after his death. I was really intrigued and wanted a narration. When I heard it, I was like ‘let’s do it’.  What made the experience different was that for once, I was not holding a phone in my hand,” he says with a laugh and the fact that he worked with actor Divya Dutta made it special. “Sone pe suhaga ho gaya (icing on the cake),” he adds.

Bhuvan has also received several awards including the ‘Entertainer of the Year’ at Cannes last year, recognising the way he is extending his boundaries. Does he see Indian artistes across board getting recognition worldwide? “In every art form, India is right there. I am glad that people across the globe are appreciating us. Bollywood films were already a hit abroad. But now people have started talking about YouTube as well as there is diversity of content. There is comedy as well as bloggers who create cooking, beauty, travel and more content,” he says and points out that it seems while the content is exploding there are not enough viewers. He gives several parallels to explain the situation and says, “During 90s, every second house had a bat and ball as everyone wanted to be a cricketer. Then there was the phase of the Indian Idol and everyone aspired to be Abhijeet Sawant. Currently, it is the same scenario as every second house has a YouTuber. It is growing rapidly.”

When asked about his future plans, the artiste points out that he does not know beyond two days from now. “I know what I have to do on Saturday or Sunday but I don’t think ahead of that. I take life as it comes and have stopped having any expectations from it,” says Bhuvan.