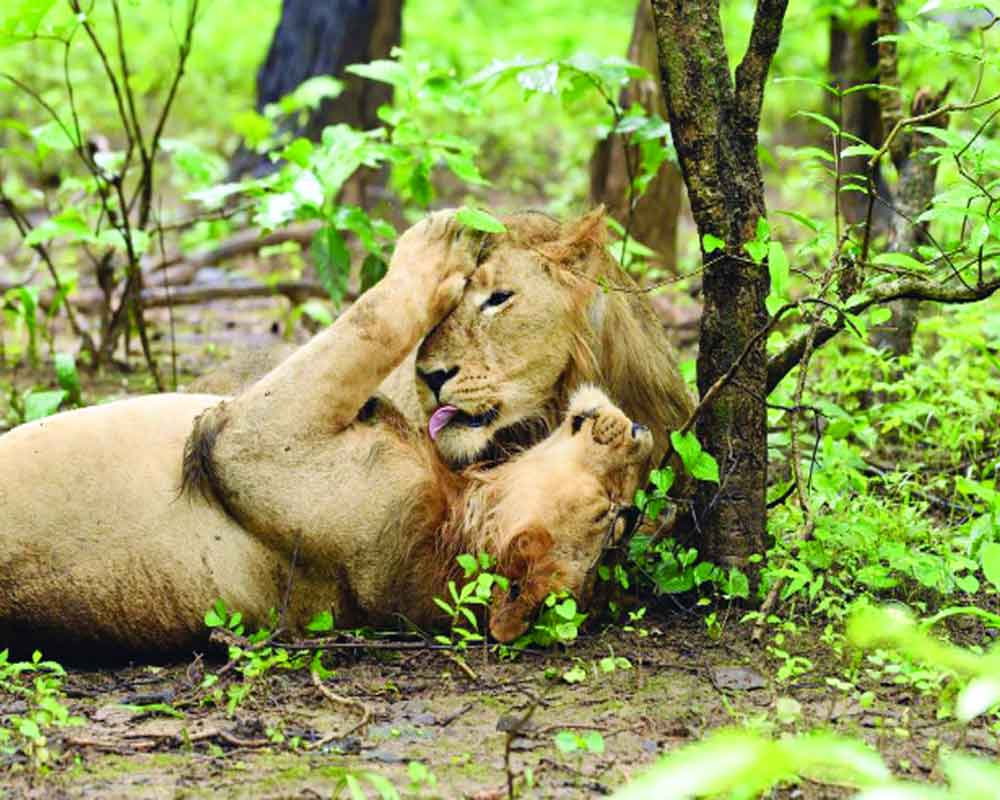 From shooting during monsoon to following certain rules and regulations of not entering the restricted areas, producer and director Upma Bhatnagar tells Ayushi Sharma that wildlife filming demands a lot of patience, perseverance and attention

Can you recall the newsflash of 1994 when approximately 30 per cent of the lions living in Serengeti National Park, Tanzania, died from an outbreak of Canine Distemper Virus (CDV)? The virus, which is normally associated with dogs, wasn’t till then thought of as deadly enough to threaten big cats until epidemic history among other species in sanctuaries suggested otherwise. In 2018, the disease broke out in India killing Asiatic lions in the Gir forest sanctuary in Gujarat. It became an alarming concern for conservationists. Filmmaker and executive producer of Optimum Television, Upma Bhatnagar will take viewers to the forefront of India’s battle with the deadly virus through her 10-part series, The Lion Kingdom. The epidemic threatened to wipe out the last of the surviving Asiatic lions in the world living in the wilds of the Gir National Park.

The Lion Kingdom is a story of how the forest department of Gir National Park worked round the clock to try and save the king of the jungle while battling heavy rains and flooding and dealing with a sudden increase in the number of crocodiles in the area. Not only will the audience get to witness the functioning of the veterinarian hospital in Gir but they will also get to marvel at the transformation of Gir during the monsoon as this is the first time ever the national park has been filmed during the rains. Upma discusses the highlights of her latest series.

What drove you to the world of wildlife? How did you conceptualise the series?

It was the most serious alarm not only in Gir but in India’s entire conservation history since independence. At stake was the existence of an entire species of Asiatic lions that does not exist anywhere else in the world. When I heard scientists and conservationists expressing fears that the Indian lion may not be able to come out of this crisis, I was really worried. Gir is very special to me. This is where I had filmed my first TV series, The Lion Queens of India. I enjoy a special bond with the land, its people and its majestic animals.

We spoke with Discovery India who sensed the gravity of the situation and gave us their full creative and logistic support. Early in 2019, we started our research. We wanted to film during the monsoon and usually the forest department does not permit shoots at that time as it is almost impossible to conduct safaris. Gir is closed from June to October. But we managed to get through despite the outbreak of the disease. The series features renowned veterinary surgeon Steve Leonard as the host. He has worked with other species and he knows how the lions were treated in Tanzania.

How did the virus come to India?

A major way diseases mutate is by jumping between species. Middle Eastern Respiratory Syndrome, Ebola, and the H1N1 Swine Flu... all jumped from animal to animal before crossing into humans. Similarly, there is a chain of other species in between. Domestic dogs living in areas surrounding the national park were responsible for the continued presence of the disease. It is transmitted through the air and infected body secretions. The symptoms generally include a high fever, inflammation of the eyes and nose and coughing. Now that they know that something like this can happen, they are taking measures to vaccinate the cattle around the area. Healthy lions from the Gir forests were also shifted to an alternative location. Shots of CDV vaccine were also imported from the US. They regularly monitored the moves of lions.

Does filming in proximity with the animals in the jungle disturb them? What were the rules and regulations that you had to follow?

I have been filming wildlife for a decade now and yes, we are not supposed to disturb the animals. There are certain rules that as a filmmaker I must follow. The first one is that you are not supposed to go very near to their respective habitats. We never go beyond the restricted area. As a result, it gets difficult to capture the animals but thanks to technological advancements, we have various types of camera lenses — wide angle, zoom, telephoto and many such. It gets easier to get all the close up shots without disturbing them. For instance, if they are roaming around in groups or the cubs are headed to play, we use long lenses to capture their everyday activities. We are told to not make too much of noise, otherwise it would scare them.

What were the on-ground challenges and how difficult was it to manage the crew members?

The biggest challenge was that we were shooting during the monsoon. The rain poured thrice a day and the cameras’ visibility was heavily affected. It’s not always necessary that animals (lions) would come out of their dens during heavy rainfall. Our filming equipment were very expensive so we didn’t want it to get wet or damaged because of rain. We could get wet but not the equipment, of course (laughs).

I am lucky that I have a young crew of camera persons. The toughest thing about wildlife filming is that you have to get up at very odd hours because the best time to shoot is either early morning or evening, before the sun goes down. During the day, it gets difficult because the animals are usually resting. No movement can be seen. Wildlife filming is very demanding in that sense. It takes a lot from your soul. There have been so many days when we were just waiting for the rains to stop so that we could start shooting. As a producer, you start worrying about your crew, the project that you started but then suddenly one day, you get the perfect shots. There are never any fixed schedules, so it requires a lot of patience, attention and hard work. I am really thankful for the support and cooperation from my team.

What are the ground realities in national parks that lead to the extinction of various species? What can a common man do to help in conservation?

The biggest challenge in India is the shrinking habitat for our wildlife because India is growing at such a fast pace. You want your conservation efforts to become a success story and you are also happy to see the increasing number of particular species but then the question is — where is the space? Our country has history, mythology, culture, and everything has taught us to be tolerant of other living beings. We would not deliberately want to harm the wildlife but when conflict happens, it’s basically learning to co-exist with it, which our ancestors have done fantastically so far. We need to make corridors for animals so that they can have safe passages.

As a filmmaker, I can raise awareness among the common public and tell them what are the challenges that they face. We need to start inculcating certain values in the young generation and let them know about the wonderful forest diversity that India has.

We were shooting with a specific tribe, so we got to know them well. Over a period of time, we were following a lioness who had just given birth to cubs. And there were other male lions who wanted to take over the area. The lioness tried very hard to hide her cubs and keep the place safe but eventually the cubs were killed. That was a heart breaking moment for all of us. We couldn’t do anything about it as we could not interfere with the ways of the habitat. Such incidents always stay with you.