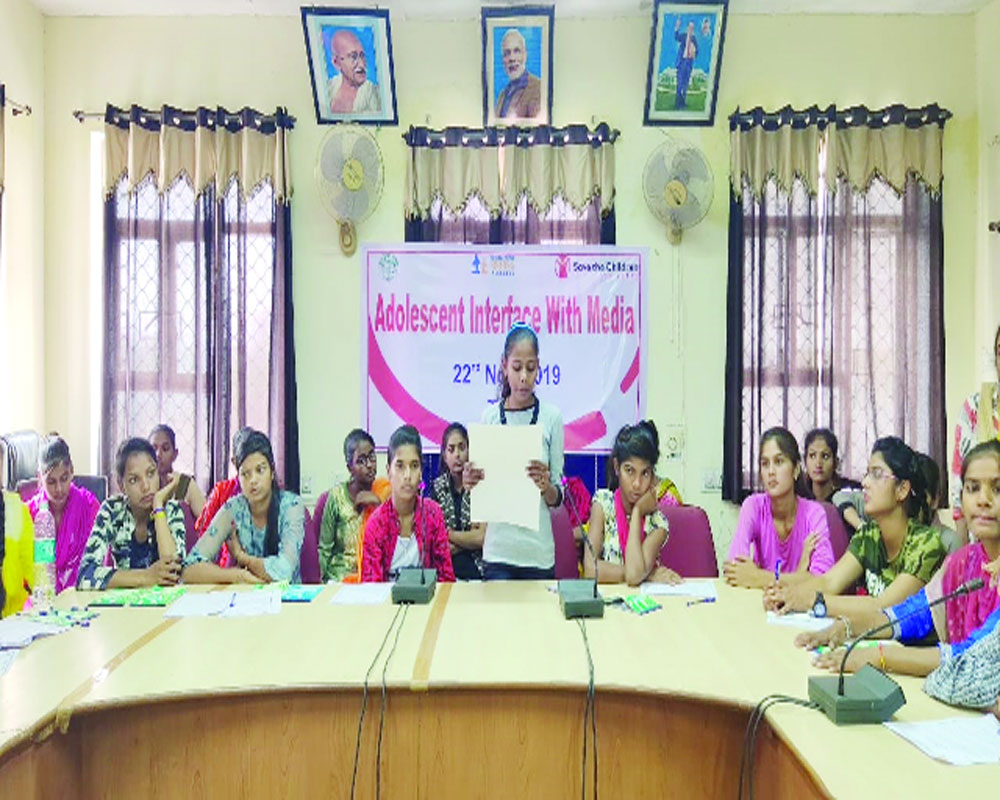 Sixteen-year-old Vasundhara Prajapat of Rajasthan has been nominated for the International Children’s Peace Prize 2020 for her instrumental work in stopping girl child marriages in her village and empowering women to discuss menstrual hygiene more openly. By Dr Abha Sharma

Until a few years ago, she was an unusually shy girl. Rather timid and even hesitant to strike a conversation with visiting guests and relatives. All she would do was to quickly greet them and slip away at the earliest opportunity. Today, she is a youth icon, one of the most vocal forces in her village. Sixteen-year-old Vasundhara Prajapat, who was nominated for the International Children’s Peace Prize 2020, has all the reasons to smile. A resident of Dardaturki village of Tonk district in Rajasthan, Vasundhara was nominated for her active efforts in advocating gender equality at grassroots level.

Excited about her journey so far, Vasundhara recalled how she was initially reluctant to join the meetings organised by Save the Children and Shiv Shiksha Samiti, a local NGO working in Tonk district for the past three decades. Her parents were not very enthusiastic either. But when she finally felt persuaded by her friends, she developed interest instantly. “It was an eye opener, an introduction to a new perspective. The most motivating fact that now keeps ringing in my mind is — how to be capable of handling your own affairs,” she said.

Born and brought up in a region where child marriages have social acceptability despite legal provisions in place, Vasundhara hadn’t thought about weddings beyond an occasion to eat, dance and enjoy. Thanks to an awareness drive for reproductive rights, she became aware about the impacts of early marriage on adolescent health, menstrual hygiene, girls’ right to education and much more. She realised that all these aspects were so significant to a youngster’s life but hardly discussed or mentioned in homes or schools. This orientation triggered many questions in her mind.

Her active association with Shiv Shiksha Samiti, however, started when she came into contact with Dholi, the then project coordinator for the campaign, Shaadi Bachhon Ka Khel Nahin (marriage is no child’s play).  She soon became a member of the children’s group and acquired life skills training.  Sensing her aptitude for social work, Dholi urged Vasundhara’s parents to encourage and motivate her.  This was the beginning of her journey as she became a member of the adolescent discussion group in 2017.

Sitaram, the present project coordinator, said, “The drive focuses on ‘peer educator concept’, where groups are formed for life skill training on different modules ranging from identifying yourself to gaining confidence and communication skills to empathy. They are prepared to address the challenges of gender norms, how to bring out changes in ‘society, me and my body’ that includes health issues as well as awareness about physical violence.”

With time, Vasundhara became more observant and sensitive towards adolescent issues. She started noticing that girls would just end up working in fields if there were no girls’ schools in villages. She also started identifying the taboos — how important was menstrual hygiene, how a girl can prevent her own child marriage, what are the government schemes for women education and empowerment, how to avail facilities provided by government at health centres, etc.

This carved her journey of becoming a changemaker. As part of the project, a Federation was constituted at Panchayat level in February 2019 named ‘Kalpana’. Around 20 girls were selected for the Gram Panchayat and Block Level Federation and assigned different roles. Vasundhara was assigned the responsibility of ‘media’, given her good communication skills. “By asserting the right public narrative on issues of importance, one can make the people in power listen to our cause,” she believes.

But striking a conversation with girls or even their mothers was not as easy as she had thought.  Most difficult task was to talk about menstrual hygiene and child marriage. But persistent efforts helped break the ice. She motivated other groups of girls too to discuss menstrual hygiene more openly. She now felt confident in discussing all issues with her family members as well and was able to convince them to support her. She in fact, also taught her mother how to use a sanitary pad.

Vasundhara’s village has schools up to Class 12 for both boys and girls but many other villages of the Panchayat only have primary schools for girls. Since parents do not wish to send their girls to study outside their village, most of the girls drop out of active schooling after Class 5. Vasundhara persuaded the dropout girls to join the two-month session organised by the Samiti and help them become well-versed in basic English and Hindi.

She confidently led all the campaigns at Gram Panchayat, block and district levels, be it upgrading an all-girls school in neighbouring Khedula village up to eighth standard or providing sanitary napkins in private schools and demand to include Tonk district in the National Adolescent Health Programme.  She was vociferous in raising the issues on all forums and submitted memorandums to Sarpanch, District Collector, local MP and of course, the media.

Vasundhara said, “During the recent lockdown, the entire attention of the government and other organisations was on maintaining food supplies which was, of course, the need of the hour. But where do girls and women get sanitary pads since the supply was halted at the health centre? When schools are open, girls do get pads there, but it was essential to keep the supply chain in order during lockdown too.” Her concerns were also raised on social media with the support of the Shiv Shikha Samiti. The demand was conveyed to the administration as well. She had been requesting installation of an incinerator too for disposal of sanitary pads. Moved by her well-intentioned efforts, the Sarpanch has now promised to install one in the village girls’ school.

The secretary of the Shiv Shiksha Samiti, Shivji Ram Yadav told us about how Vasundhara trained nearly 180 girls through life skill sessions. “Her role has been commendable in the “Chuppi Todo” (Break the Silence) programme, focussing on menstrual hygiene. She has done really well in creating awareness about child marriage and adolescent health and rights,” he said.

Vasundhara is the eldest among her three siblings, and hence, her grandparents were keen on getting her married too. They loved her immensely but were stuck in an old mindset so Vasundhara mustered up the courage to speak to her parents and convinced them to let her study. She was instrumental in stopping three child marriages using the helpline number. The marriages eventually were called off but she invited a lot of displeasure of villagers for her alleged “audacity.” Some of them even dissociated with her family. “Look at her. Now she will teach us what is right,” became a common refrain. But for Vasundhara, her family’s support helped her continue the path. “If your family is with you, you can do anything,” she says. Her recent nomination for the award, however, has eased out the somewhat hostile environment towards her. Well, now, she has begun to receive praises!

When asked about her dreams, she replied, “I wish to be in politics to be able to better the life of people and girls.” She is particularly fascinated by the leadership qualities of former Prime Minister Indira Gandhi and her own namesake, former Chief Minister of Rajasthan, Vasundhara Raje. She feels the key to address public grievances comes from the government. She said, “Samasya ka hal sarkaar se hi aata hai. If you are in a position, you can be instrumental in bringing about a change for people, especially a better life for girls.” She wants to help every girl who dares to dream like the protagonist of her favourite film, The Secret Superstar. —Charkha Features