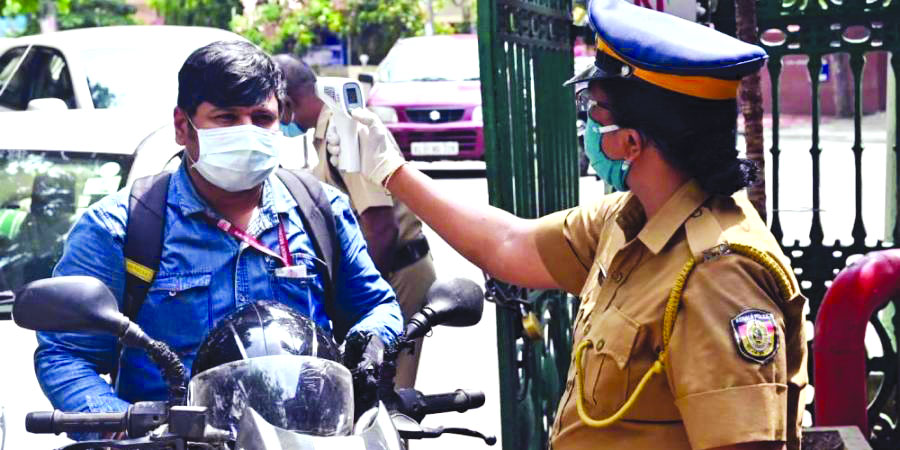 Working at the Corona hotspots from morning till evening, women police constables have been walking on the line of fire since the beginning of the nation-wide lockdown. Their contribution must be recognised not just as public servants but as women who are taking care of the nation along with their children and families.

Standing under the sun in Harnaamdas area — one of the hotspots of Meerut, constable Latesh sanitises her hands and then brings her mask down to wipe the sweat dripping down her forehead. “I have two children. The schools are shut so I am a little relaxed about their safety. I reach home around nine at night, take a bath, cook dinner, help them in their studies, make preparations for the next day and then go to bed past midnight. To ensure that all the household chores are complete before I leave for my duty, I have to wake up at five,” shared Latesh who, despite being worried about her health, puts duty first. The only thing she complains of is the lack of sanitation facilities. “Risk of contamination is higher in hotspot areas. In such a situation, where are we expected to relieve ourselves? There is no police station nearby where we could use the washroom. In its absence, we have to request people to allow us to enter their houses which increases our chances of exposure. We take huge risks to survive,” she added.

Constable Meenu, who is also posted in a hotspot in Meerut shares the challenges posed by the 12-hour long duty. “After reaching home, I bathe and keep my uniform outside the house in a separate box. In this 12-hour duty, I do not get time to wash and iron my uniform every day and have to use the same uniform for two days,” says she as she has to complete other household chores before and after the duty.

She believes that people are safe inside their houses and she puts in extra efforts to ensure that lockdown guidelines are being followed strictly in the areas assigned to her. “We eat while standing outside the gates of the affected colony so that people are safe,” says she.

In another hotspot area of Meerut City, a woman constable Anita is seen scolding people for roaming unnecessarily on the streets. And then, the very next moment, she is video calling her toddler daughter and calming her down. She is serving the public for the last nine years. “We have to be strict as people do not understand the threat. We are standing here in a contaminated area risking our lives and people want to roam outside — I do not understand this,” rues Anita, hinting towards the irresponsible behaviour of people who, despite having the privilege of staying inside their houses, were breaking the rules of the lockdown. “I am concerned about my children as they are quite young. I have to leave them with my mother-in-law as my husband serves in the Indian Army and is posted outside Meerut.”

These women posted in high-risk areas consider this ‘special-duty’ as an opportunity to serve the people of the country. In the interviews, they admit that they are not afraid of Corona and will keep the honour of the uniform by serving till their last breath. “While talking to my parents, I wanted to tell them how much I missed them but then I remembered why I joined the police services,” shares Sonam whose parents live in Saharanpur while she has been serving as a constable for the last 10 years in Meerut.

Although, these women constables are fearless, but they have their weak moments too. Sharing one such incident, constable Bobby says, “On the very first day of my posting in the hotspot area, I was scared. As part of our daily routine, my parents called me during noon and I wanted to ask my mother to pray for my health but I had to hold back my nervousness so that they don’t get tensed.”

Be it the police, health or sanitation department, every person serving in the high-risk environment is equally vulnerable and can easily be exposed to COVID-19 but it is about time that the dual roles of women are acknowledged. They carry various responsibilities — devote 12 hours in the hotspot regions, eight hours to household chores and get hardly four hours for themselves. On ground, they are more exposed to sanitation and hygiene challenges than men, yet stand in the line of duty with equal courage, fighting Corona effectively.  Salute!